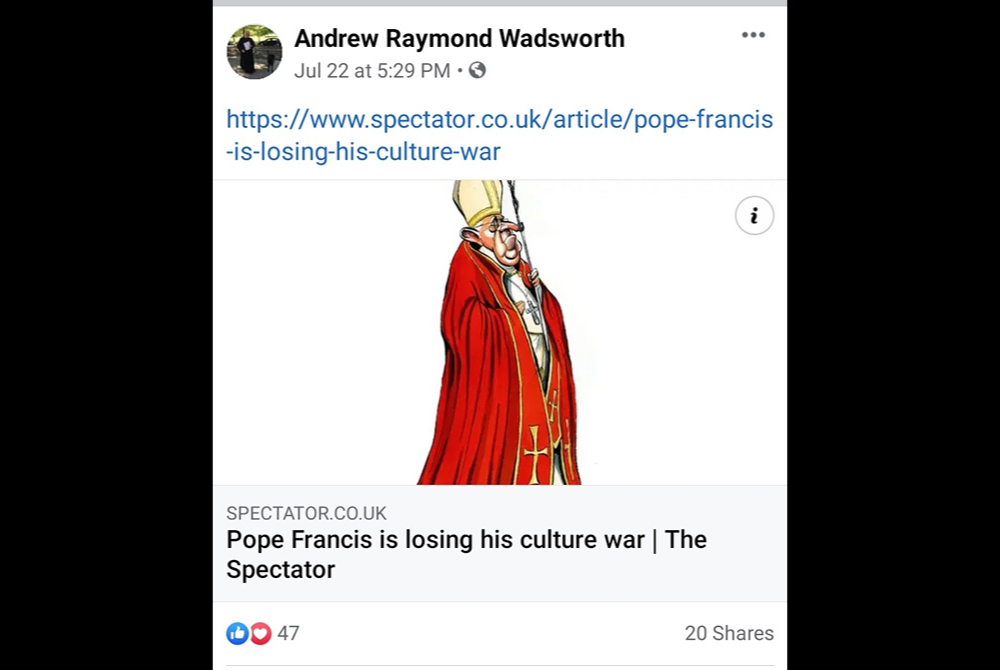 The priest who heads a Catholic Church commission that prepares English translations of liturgical texts has attacked Pope Francis' recent decision to reimpose restrictions on celebrating the Latin Mass "as full of errors and generalizations" in a series of new social media posts.

Msgr. Andrew Wadsworth, executive director of the International Commission on English in the Liturgy, has shared articles, essays and videos critical of Francis on his Facebook page and has "liked" comments from people angry about Traditionis Custodes, the apostolic letter the pope issued on July 16 that curtails use of the pre-Vatican II liturgy.

In a since-deleted post, Wadsworth likened the motu proprio to "an atomic bomb" that "fell on the Church," which he blamed for making him sick as if it were "a visceral reaction to this wound that has been inflicted on us."

In the same July 23 post, Wadsworth, 59, compared himself to an inmate on death row, "awaiting news of when his sentence will be carried out" given the uncertainty as to what his home diocese in the U.K. and the Archdiocese of Washington, where he currently lives, will do regarding the Latin Mass in the future.

Contacted by email on Aug. 3, Wadsworth told NCR: "I am offering no further comment on Traditionis Custodes at this time."

Wadsworth's post on July 20 that Francis' decision was "full of errors and generalizations" was deleted shortly after being contacted by NCR.

However, his Facebook activity since July 16 reflects the anger, frustrations and resentments that traditionalists and their allies have been venting on blogs, YouTube videos, Twitter and elsewhere since Francis decided to roll back the concessions his two immediate predecessors allowed for celebrating the Latin Mass.

Among the posts that Wadsworth has shared since mid-July are lengthy statements and essays critical of the apostolic letter, some of them written by Francis' most consistent critics, such as Cardinals Raymond Burke and Gerhard Müller, the former prefect of the Vatican's Congregation for the Doctrine of the Faith.

In addition to sharing straightforward news articles and updates on how individual diocesan bishops are responding to the motu proprio, Wadsworth's Facebook page also includes posts like the July 22 sharing of a critical essay from The Spectator that features a political cartoon version of a haughty-looking Francis with the headline, "Pope Francis is losing his culture war."

On July 16, Wadsworth posted a link to the text of Traditionis Custodes. A follower of his responded by commenting with a not so passive-aggressive translation of 1 Peter 5:3: "Never be a dictator over any group that is put in your charge, but be an example that the whole flock can follow."

On July 20, Wadsworth posted a news article about a survey the Vatican sent to the world's bishops to gauge the impact of Pope Benedict XVI's 2007 apostolic letter Summorum Pontificum, which had liberalized access to the Latin Mass. Among the comments, someone wrote: "One reasonably suspects the outcome predates the survey."

On the same day, he angrily referenced a reported interview with Archbishop Augustine Di Noia, a Dominican theologian and Vatican official who had opined that the Traditional Latin Mass movement "hijacked" the initiatives of popes John Paul II and Benedict XVI in order to sow division in the Church.

Wadsworth wrote: "What Archbishop DiNoia has written is no more than a revisionist account in an attempt to regain control of the narrative. Like the motu proprio, it is full of errors and generalizations. We cannot allow these people to rewrite history - let's stick to the facts!"

On July 25, Wadsworth posted a link to a blog written by an auxiliary bishop from the Netherlands who suggested that Mass in the vernacular is "collapsing" and that Traditionis Custodes is an "evil" document. 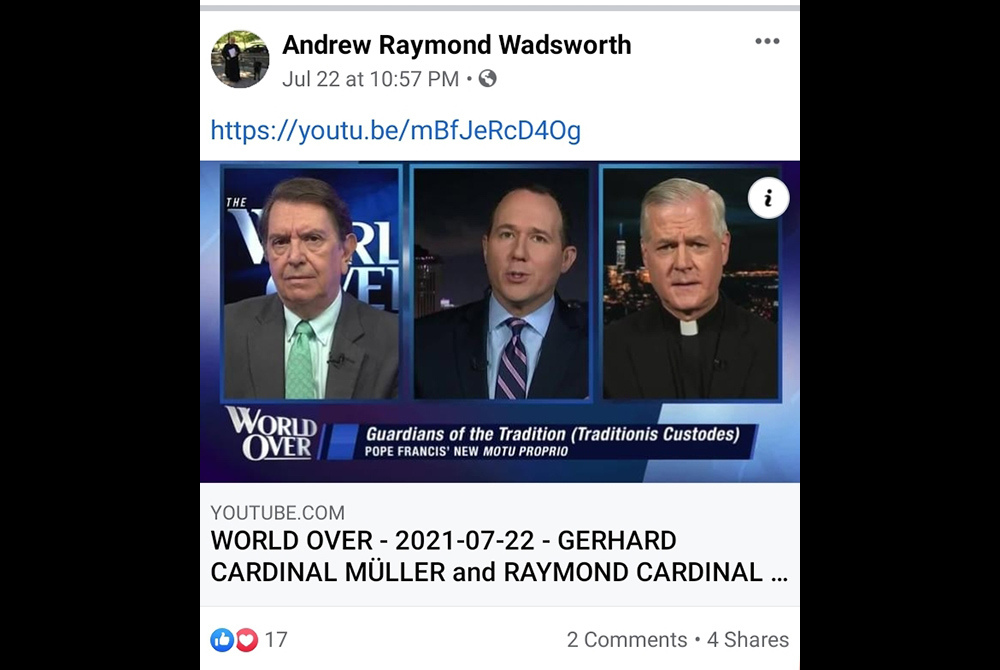 Wadsworth, a priest of London's Westminster Archdiocese, has served as executive director of the ICEL Secretariat since 2009. Headquartered in Washington, ICEL was originally set up in 1963 by bishops' conferences across various English-speaking countries to aid in the production of English-language liturgical texts following the reforms of the Second Vatican Council.

In 2019, Wadsworth's social media activity also mirrored the anger that traditionalists vented during the Synod of Bishops for the Pan-Amazon region, specifically over a wooden indigenous statue that conservative Catholic media and traditionalist blogs took to calling "Pachamama," a fertility goddess in the Andes.

"I, Andrew Raymond Wadsworth, do not wish to belong to the new idolatrous Pachamama Church currently being brought into being," he said in an Oct. 26, 2019, post on his Facebook page.

The "Pachamama" controversy hit its boiling point when a conservative Austrian Catholic activist stole several of the statues from the Church of St. Mary in Traspontina near the Vatican and threw them into the Tiber. The statues were later recovered.

During the Amazon synod, Wadsworth also posted a picture on Facebook showing Brazilian Catholics attending a traditional Mass, where he wrote "Not everyone in the Amazon is worshipping idols…".

More recently, responding to a priest who had commented on a July 18 post of his depicting a lonely broken heart "emoji," Wadsworth wrote that he had celebrated the Latin Mass since the day after his ordination in 1990.

"Everything that I understand about being a priest is in some sense related to this form of the Mass," he wrote.

In a 2013 talk he delivered to the Church Music Association of America, Wadsworth spoke of growing up in the immediate aftermath of the Second Vatican Council and the changes that made him feel uneasy.

"I think I was quite young when I realized that the Church was going through a process of discarding many features of the liturgy which had characterized her experience over long centuries," he wrote, adding that he had an "early fascination "with old missals and prayer books."

Wrote Wadsworth: "This sense of departure from tradition became even more evident on the occasions when I was at Mass elsewhere and even at that stage encountered 'folk Masses' and other contemporary styles that were clearly at variance with what I experienced at home."

A version of this story appeared in the Aug 20-Sept 2, 2021 print issue under the headline: Wadsworth criticizes Pope Francis.