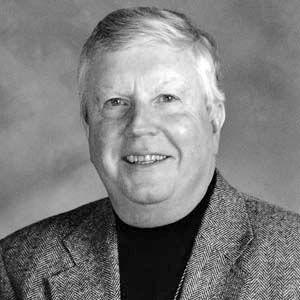 Germain Grisez, a Catholic philosopher, ethicist and moral theologian, died Feb. 1 at age 88. Grisez, seen in an undated photo, was a retired professor who had taught for years at Mount St. Mary's University in Emmitsburg, Md. (CNS/courtesy Mount St. Mary's)

"He defended it with great lucidity," the priest said about the faith of a man he considered "a great mentor and collaborator."

Ryan made the comments in a phone interview with Catholic News Service shortly before celebrating the funeral Mass for Grisez at St. Anthony Shrine Catholic Church in Emmitsburg, which was followed by interment in St. Anthony Cemetery.

Grisez, who died Feb. 1 at age 88, was a retired professor of Christian ethics at Mount St. Mary's University in Emmitsburg. He was on the faculty there from 1979 until his retirement in 2009.

Grisez was "profoundly influential," said Ryan, former executive director of the U.S. bishops' Secretariat of Doctrine and Canonical Affairs, who is now on the faculty of Sacred Heart Major Seminary in Detroit. "His work is utterly true to the faith and strikingly creative."

He said that "although dissenters sometimes criticized his positions as being too rigid," Grisez regarded "moral norms as rules imposed upon people from without. He understood the moral norms as implications of genuine love for persons and all that is truly good for them."

"Building on and sometimes diverging from the work of St. Thomas Aquinas, he developed a theory of basic human goods that has influenced ethicists, legal theorists and theologians," Ryan added.

Grisez wrote numerous books and articles and is known for framing an intelligent and informed Christian response to a range of important ethical dilemmas in society. A compilation of his works can be found online at www.twotlj.org.

His 1964 work "Conception and Natural Law" continues to be one of the key works often referenced in support of Blessed Paul VI's 1968 encyclical, "Humanae Vitae" ("Of Human Life"), which affirmed Catholic teaching against artificial contraception.

Another work, "Abortion: The Myths, the Realities and the Arguments," published in 1970, was a standard text in moral theology classes and continues to be studied today and used in debates about stem-cell research.

Grisez established himself as a proponent of natural law in his three-volume "The Way of the Lord Jesus," which was widely used among those studying moral theology and Catholic teaching on contraception, abortion and chastity.

He joined John Finnis and Joseph Boyle in the 1980s in writing "Nuclear Deterrence, Morality and Realism," a critique that challenged the government doctrine of assembling an overwhelmingly large nuclear weapons arsenal to ward off any potential attacks from other countries.

More recently, Grisez and Finnis, currently the Biolchini Family professor of law at the University of Notre Dame, issued a 35-page open letter to Pope Francis in 2016 asking that he address eight positions against the Catholic faith they said were likely to be supported by the misuse of the pontiff's apostolic exhortation on the family, "Amoris Laetitia."

They argued that some passages in the pope's document would be used to promote errors about marriage, confession, conscience and moral law. First published in the journal First Things, the letter can be found at www.twotlj.org.

Grisez's contributions in the field of moral theology were recognized with numerous awards and invitations to speak around the world. In 1972, he and his wife and collaborator, Jeannette, received the Pro Ecclesia et Pontifice Cross from Blessed Paul in recognition of their service to the church.

Born in Cleveland Sept. 30, 1929, to the late William and Mary Grisez, he grew up in a large Catholic family during the Great Depression.

He completed undergraduate studies at John Carroll University in Cleveland and received a doctorate in philosophy from the University of Chicago. Prior to joining the faculty at Mount St. Mary's University -- where he held he held the Rev. Harry J. Flynn Chair of Christian Ethics -- Grisez taught at Georgetown University, the University of Virginia and Campion College in Regina, Saskatchewan. He also had been a special assistant to Cardinal Patrick O'Boyle of Washington.

"Grisez's early experiences studying and leading graduate courses on moral philosophy and ethics, discussing material from St. Thomas Aquinas, Aristotle and Kant helped guide him to feel personally called to dedicate his life to intellectual work in service of the church," said a Mount St. Mary's news release about his death.

"I have been honored to work closely with Germain for many years," Ryan told CNS. "In recent years, we have been working on a book on eschatology, which is concerned with the last things -- death and the coming of the Lord, resurrection from the dead, the new heavens and new earth, judgment, heaven and hell.

"Germain has brought to bear on this field his philosophical work on the ultimate end of the human person," said the priest, who first met Grisez in 1983. "We try to account for both the specifically human fulfillment of the human person and his sharing in divine intimacy."

He added, "He was a loyal friend. I will miss him greatly."

Among the many, many remembrances of Grisez is a post on a blog called "Me and My House," found at https://tinyurl.com/yc2l5tc6.

"I'm not sure how the most deliberate, clear-thinking, man on the planet ever wound up calling this home-schooling mother of 10 children a close friend, but in fact, it's true," wrote the blogger. "The times I spent with Germain were special and treasured. Our lives were as opposite to one another as possible but we found common ground on many levels and I believe we had an understanding of the heart."

In the spring of 2009, Mount St. Mary's marked Grisez's 30-year career by recognizing him as professor emeritus and conferring on him the honorary degree of doctor of divinity. Grisez lived in a house on campus until 2016, when he moved to Oxford, Pennsylvania, to live with family.

Grisez and his wife enjoyed traveling and hiking at many state and national parks. Jeannette died in February 2005. Grisez died at his Pennsylvania home.

Survivors include three sons, Thomas of Annapolis, Maryland; James of Seattle; and Paul, of Oxford, Pennsylvania; 12 grandchildren; and 23 great-grandchildren.