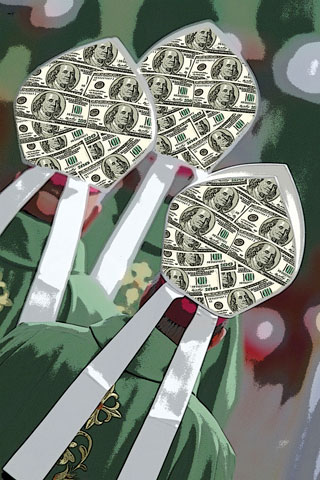 Catholics in Newark, N.J., were outraged to learn that Archbishop John Myers had spent $500,000 for an extension on his retirement home. Catholics in Atlanta questioned the acceptability of Archbishop Wilton Gregory's building a $2.2 million residence for himself.

For many, these actions raised the questions: What is acceptable compensation for a sitting bishop and for a retired bishop? Who determines what's acceptable?

NCR's interviews with bishops and experts who monitor church finances found that no hard and fast rules govern this issue. National guidelines exist, and seem to be widely followed, but specifics on local implementation are hard to come by.

The average bishop's salary seems to be in line with that of priests within his diocese.

"Most dioceses use the compensation levels for their clergy as the reference point," said Frank Butler, principal and founder of Drexel Philanthropic Advisors. "So, we do know what that is. Typically, across the country, average priests' salaries go from anywhere from $15,000 to $18,000, maybe a little bit higher than that." Butler is also former president of Foundations and Donors Interested in Catholic Activities (FADICA).

The website of the U.S. Conference of Catholic Bishops has a document titled "Diocesan Financial Issues," which includes a section called "Guidelines for the Retirement of Bishops."

For all bishops in retirement, the section recommends a minimum $1,900 monthly stipend. It also recommends that "in fraternal charity and solicitude," each diocese provide:

This is where it can get tricky.

"One of the issues here is that so much of the bishops' compensation comes in the form of perks," said Charles Zech, director of the Center for Church Management and Business Ethics at Villanova University.

"They live in a mansion rent-free. Meals and other things associated with the position are often not charged to them. They get a chauffeur driver wherever they go. A lot of what you and I would recognize as compensation really doesn't show up as such, because it's not part of their salary, and it's part of the overall running of the diocese, and it's hard to pull out as being compensation to the bishop, per se."

Jack Ruhl, professor of accountancy at Western Michigan University, provided NCR with some of the only published compensation figures available that were specific to diocesan leaders. Dioceses aren't required to report anything, according to Ruhl.

In its 2013 financial report, the Boston archdiocese listed Cardinal Sean O'Malley's "Reportable Compensation from Corporation Sole" at $43,153. It included in a footnote: "From Cardinal O'Malley's stipend, $35,953 is paid to the Capuchin Priests and Brothers; $7,200 is paid to the Cathedral of the Holy Cross, Boston for housing." The document also listed an Amount of Other Compensation Not Included on W-2/1099 for O'Malley of $16,800.

Ruhl also provided a document on benefit plans under Notes to Financial Statements, June 30, 2011 and 2010, from the St. Paul and Minneapolis archdiocese.

"The Archdiocese has a deferred compensation agreement with an archbishop who retired in fiscal 2008," the document states. "The agreement requires monthly benefit payments for life plus health and medical insurance and allowances for other living expenses. The present value of the estimated future obligation under this agreement is estimated to be approximately $429,000 at June 30, 2011 and 2010 based on the expected annual cost of approximately $61,000 for both years."

A bishop's compensation is generally paid for by his diocese, according to Zech. "It comes from diocesan revenues, like the compensation for any diocesan employee. Investments, income from investments that the diocese receives, contributions, and, of course, parishioner contributions are passed on to the diocese through the parish assessment."

Zech said that the diocesan chief financial officer is responsible for setting the budget for a diocese, in conjunction with the bishop, and probably proposes a figure for bishop compensation.

Canon law mandates that every diocese must also have a diocesan finance council, which is usually made up of laypeople, such as accountants, bankers and lawyers. The council is a consultative body that monitors the diocesan budget and advises the CFO and bishop on any financial aspects that impact the diocese. The diocesan CFO or bishop or both in combination appoint council members.

The bishop appoints the CFO for a five-year term, but the CFO is protected from being fired for those five years, "except for a grave cause to be assessed by the bishop after he has heard the college of consultors and the finance council," according to Canon 494.

While the finance council doesn't determine a bishop's compensation, its members would know what it is and they may have input into what amount is appropriate.

"It's more the CFO's job to put together the budget. And then the [diocesan finance council] provides a consultative voice on the budget. But they don't necessarily approve it," Zech said. He said he doesn't think approval for a bishop's compensation usually goes any higher up the ladder than a diocese's CFO.

While the process of overseeing the diocesan budget is in the hands of a CFO and diocesan finance council, Zech said he didn't know specifically how bishop compensation is determined.

NCR reached out to several bishops, active and retired, to ask about compensation. Most either declined to comment, citing travel or workload demands, or didn't respond. Two retired bishops, Bishop Donald Trautman of Erie, Pa., and Auxiliary Bishop Thomas Gumbleton of Detroit, indicated that their retirement benefits reflected the national guidelines recommended by the bishops' conference. Both also said that their retirement pensions were at or near the same level as the priests of their respective dioceses.

Gumbleton said his pension was a little bit higher than that of priests in his diocese, though by an insignificant amount. He also said the Detroit archdiocese follows the guidelines from the bishops' conference.

"The diocese is to provide a retired bishop a salary that is enough to live on, but then provide these other things -- housing, transportation, and they would pay for a housekeeper, too, if you wanted," Gumbleton said.

Gumbleton's diocese provides him with a monthly retirement pension, a staffed office, and an apartment, rent paid. He drives a diocesan-owned car and the diocese pays for fuel.

He said the procedure for determining compensation is fair, but the only problem is "nobody ever asks any questions. If I wanted to live in a big house ... I guess I could do it, and nobody would say anything about it, but I prefer to have a small apartment in the city. I get what I ask for. And each bishop does."

According to Butler, since the bishop is the person who holds the church's property and plays the top role in the diocese's administration, the concern should be how he shepherds all of the funds entrusted to him.

"That's where it's fraught with danger, unless there's good oversight and good transparency. Bishops have been known to use funds for other purposes, other than what they were intended," he said. "They've used funds to cover up, in cases of clergy sexual abuse. They've used funds to curry favor with people in the Vatican. That's what you have to worry about. Not so much their direct compensation. It's what role, what voice, what influence they have in using funds that belong to the church that they're shepherding."

Butler added that donated funds must be used for their intended purposes, since canon law protects donor intent.

"Best practices should set a national standard, using measures [such as] how large the diocese, bishop versus archbishop, years as a bishop," Zech said. This would establish a pay scale, but he added, "Again, it's so tricky, because so much of a bishop's compensation is in the form of perks."

Ruhl said the Boston archdiocese is ahead of the game in terms of financial disclosure. Its financial reporting, available online, "is extremely extensive and very detailed," he said. If bishops and dioceses wanted to be more transparent about compensation and retirement benefits, Ruhl recommended that they prepare a document similar to the annual report produced by a corporation and list the salaries for the top five administrators.

Butler said that bishops should take their spiritual guidance from Apostolorum Successores, or the Directory for the Pastoral Ministry of Bishops, a document published by the Vatican's Congregation for Bishops. Bishops should also become very familiar with the Code of Canon Law, which they often ignore, he said.

[Mick Forgey is an NCR Bertelsen intern. His email address is mforgey@ncronline.org.]

A version of this story appeared in the April 11-24, 2014 print issue under the headline: How much is a bishop worth?.