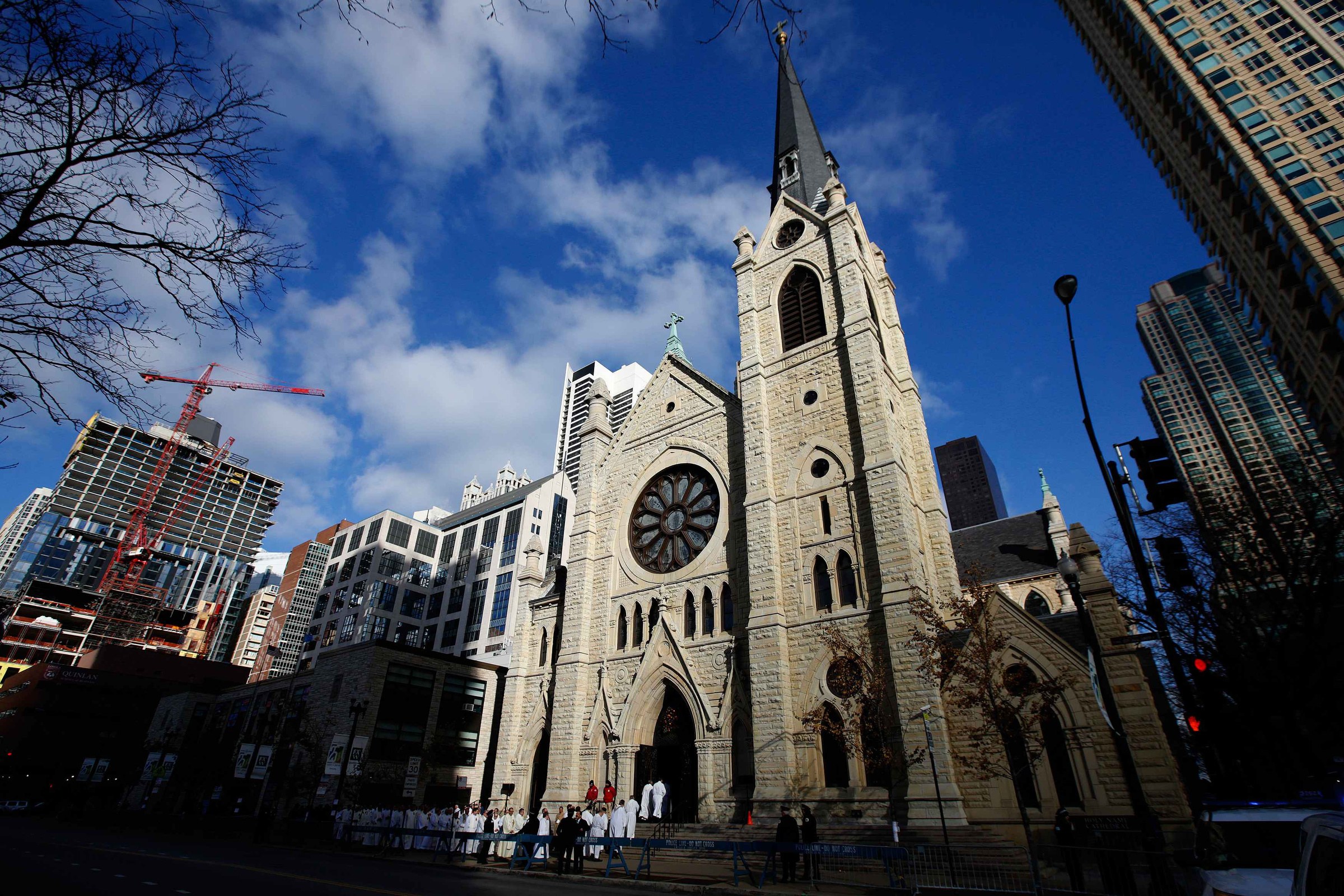 As the media gathered in Holy Name Cathedral for the installation Mass for Chicago's ninth archbishop Nov. 18, I was sitting in a sunny room on my university campus with 19 students from a gender and lit class. They had been reading about lesbian, gay, bisexual and transgender rights and had watched a documentary about anti-homosexuality activism in Uganda. Their professor had invited two guest speakers — the university chaplain and me — to give some context to their discussion of religion and homosexuality.

The chaplain, a Protestant, covered the biblical exegesis, pointing out the problem of taking Leviticus literally and explaining how the story of Sodom was really about a lack of hospitality, not homosexuality. I presented Catholic teaching, explaining its roots in natural law, gender complementarity and, well, patriarchy. I also shared how I didn't find that particular teaching convincing, nor did I feel that it resonates with my personal experience of LGBT people and couples.

The class discussion eventually turned to how — or why — people stay in churches that teach things with which they disagree.

"Do you just stay to fight for change from within?" the professor asked.

That might have been true for me at one time, but it certainly isn't my primary motivation anymore. No, I'm just here because I want to try to follow Jesus, in community with others, as part of the religion to which I've devoted much of my life.

The reporter in me should have been more excited when the announcement came in September that Bishop Blase Cupich of Spokane, Wash., would be the next archbishop of Chicago. But I stopped pinning my hopes on prelates a long time ago.

Progressive Catholics immediately started celebrating that a liberal-leaning bishop had been named to such a prestigious post, positing that it must be further evidence that Pope Francis is going to shake things up. This appointment "could upend decades of conservative dominance of the American hierarchy," a Religion News Service columnist predicted.

Meanwhile, traditionalist Catholics tried to find solace in any orthodox statements from Cupich, including ones about gay marriage and abortion. And, hey, what about that conservative archbishop that Francis just named to Sydney?

The 24/7 news cycle requires me to have an instant opinion, but I didn't. The priests and members of my own parish were optimistic, but I kept having flashbacks to news of another new archbishop coming from the West Coast to Chicago 17 years ago.

The death of Cardinal Joseph Bernardin and the naming of his successor were among some of the biggest stories I had covered as a reporter at the Catholic New World, the Chicago archdiocesan newspaper. I remember standing against the wall at the cathedral for Cardinal Francis George's installation Mass in May 1997, crammed with all the national media who flew in for the story. At least it was warmer than it had been six months earlier, when the same media had descended for Bernardin's funeral.

I had shed a few tears at the funeral, perhaps partly out of exhaustion from helping to publish a 100-page memorial special edition of the New World in less than a week. But my feelings were decidedly mixed. After four years of covering Bernardin, I was well aware of his strengths, but also knew a few of his weaknesses.

When his successor was announced, I remember thinking, "Who?" It was not unlike my reaction to the election of Cardinal Jorge Bergoglio to the papacy almost two years ago. Again, I had mixed feelings about George's appointment, but I decided to give him the benefit of the doubt.

I quickly learned some of George's strengths: He would remain at an event, talking to every last person who wanted to see him. And he looked that person straight in the eyes. But I also learned of his weaknesses: his use of circular logic — "It's right because the church teaches it. The church teaches it because it's right" — and his insistence that others accept it, too.

George was not only my bishop; he was my boss. Or, more accurately, my boss' boss' boss. Some people who worked for and with him are deeply saddened by his retirement, not to mention by his serious cancer. A friend recently wrote a lovely tribute about how he visited her after she gave birth to her daughter.

About a year into George's tenure, the archdiocesan newspaper editor he had hired sent me to a conference where a speaker was talking about women's issues. She spoke inspiringly about her desire to see women ordained to the priesthood, which I dutifully put into a news story. The editor rewrote the story to make it sound as if the speaker supported current church teaching against the ordination of women. I asked for my byline to be removed, packed my personal belongings from my office the next week, and began looking for another job.

One recent headline writer called George "America's Ratzinger." The analogy isn't perfect, but you get the point. In his final Mass Nov. 16, George said that the people of Chicago are his legacy. A lot of those people have been depressed and afraid.

After a long day of teaching, appointments with students, and meetings, I finally got the chance to sit down at my computer and find out what happened outside the walls of the university. My Facebook feed was filled with commentary about the three days of Cupich's installation ceremonies.

There's video of one former colleague telling FOX News Chicago that she sees as a good sign the fact that "All Are Welcome" was chosen as the processional hymn at Cupich's first Mass. A friend is moved to tears by the fact that Cupich brought Bishop William Skylstad and Archbishop John R. Quinn to stand beside him for the eucharistic prayer at the installation. I, too, am moved by a photograph of another friend, a young woman I met a long time ago in a Catholic feminist organization, as a server at the Mass.

There is a twinge of regret that I missed the big event.

I'm not pessimistic, but neither am I hopeful. I have learned the hard way not to put my faith in church leaders. I prefer good ones to bad ones, but they are not the most important people in the church to me.

An email arrives from the professor of the class where I spoke earlier in the day. Thank you, she says, pointing out that so many of her students struggle with religion and issues of gender and sexuality. I struggle, too, but perhaps the sharing of some of my story can demonstrate that it's possible to struggle and still somehow find a place in a church or religious institution.

As the students packed up at the end of the class, one put in a plug for a course I've taught on gender and religion. The class, she said, changed her life.

I think I was in the right place that morning.

[Heidi Schlumpf teaches communication at Aurora University outside Chicago. She is the author of While We Wait: Spiritual and Practice Advice for Those Trying to Adopt (ACTA).]