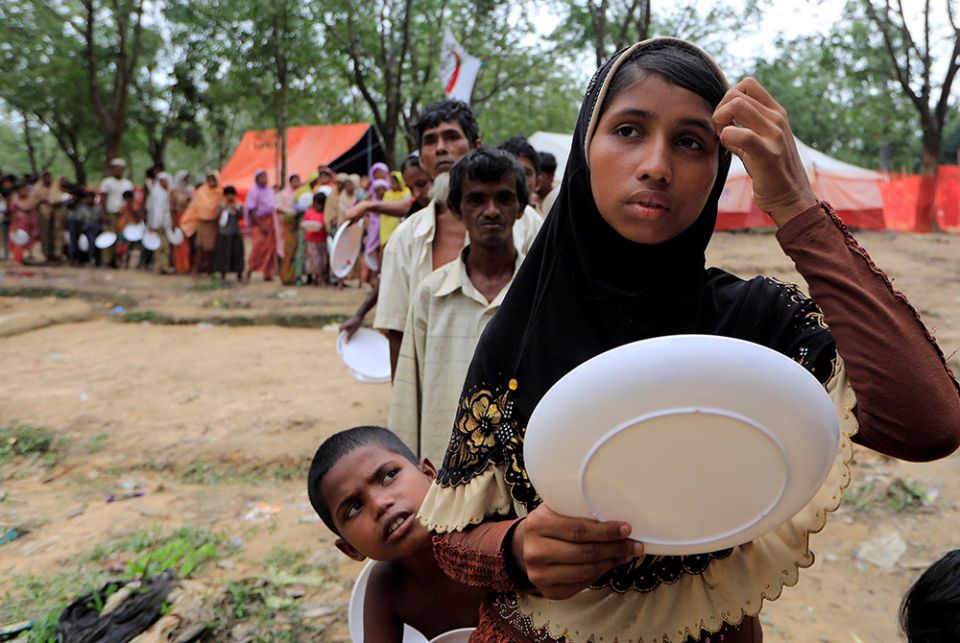 Rohingya refugees line up to get food from the Turkish Cooperation and Coordination Agency near Cox's Bazar Oct. 21, 2017, in Bangladesh. (CNS/Reuters/Zohra Bensemra)

Washington — On June 20, communities from around the globe celebrated World Refugee Day, established by the United Nations as an international day to acknowledge the strength and courage of people forced to flee their home countries due to conflict or persecution.

Yet, the commemoration of World Refugee Day comes at a record low for refugee resettlement.

Despite the long tradition of welcoming refugees in the United States, largely supported by faith-based organizations such as the U.S. Conference of Catholic Bishops' Migration and Refugee Services, the number of refugees resettled in the United States was at its the lowest in 2020 since the founding of the resettlement program in 1980.

At the same time, the past year marks a record high number of people forcibly displaced around the world.

The U.N. High Commissioner for Refugees estimates there are currently 26 million refugees who have been forcibly displaced due to "well-founded fear of being persecuted for reasons of race, religion, nationality, or membership of a particular social group or political opinion."

In response to the current climate for refugees, World Refugee Day interfaith prayer services were organized across the United States by MRS, in collaboration with the Roundtable Association of Catholic Diocesan Social Action Directors and the Princeton University Religion and Resettlement Project, to pray publicly for the well-being of refugees in the United States, across religious and political lines.

According to Todd Scribner of MRS, one of the principal organizers of the event, part of the purpose of these nationally coordinated services was to pray with and for refugees as a way to rebuild relationships with these communities, and highlight "the religious traditions out of which many of these communities have emerged and embraced."

In a statement for World Refugee Day, Auxiliary Bishop Mario Dorsonville of Washington, chairman of the U.S. bishops' Committee on Migration, stated: "We know that it will take time for our country to return the refugee program to the historic norms that have come to be expected in its efforts to assist refugees. However, my brother bishops and I remain committed to those who live each day seeking to free themselves from violence, poverty, and persecution."

Dorsonville continued, "As Catholics, we recall that many in our own community came as strangers. We must never forget that experience, nor the related challenges of integration, which the church is uniquely qualified to ease."

Each service was conducted by a local network, coalition or resettlement site and included prayers offered from the diversity of religious traditions present in each local context.

Tom Dobbins, director of justice and peace for Catholic Charities of the Archdiocese of New York and was the coordinator for the event, said the prayer service gave the archdiocese the opportunity to "collaborate with interfaith partners who we have connected with in the past and continue to do work with today."

"Oftentimes in the Bible it says welcome the stranger because you were a stranger yourself in Egypt," Dobbins said. "What a really important thing to do, to pray as people of faith from many different traditions to come together and pray with other people of faith for God's providence to help our brothers and sisters and neighbors in need."

Boukary Ouedraogo, a refugee from Burkina Faso, was invited to share his story during the prayer service in New York. After Ouedraogo and his wife were granted asylum in the U.S. in 2006, they enrolled in the Catholic Charities Community Services system, where they were able to receive the support for finances and employment.

"The help we received at CCCS was essential for our survival, as we began our journey in this country," Ouedraogo said.

Now, 15 years later, Ouedraogo has returned to the New York Catholic Charities agency as the economic empowerment supervisor in its Refugee Resettlement Department. In his current role, he ensures that refugees and asylees receive education and employment preparation toward the ultimate goal of financial independence.

Although Ouedraogo identifies as a Muslim, he said that as a client of Catholic Charities Community Services himself, it is significant for him to be able to share his story and support refugees in living new lives of dignity.

"What a blessing to have the opportunity to serve an immigrant population made up of people who are in the same situation in which I was years ago! I feel very blessed and am honored to be part of this interfaith prayer service as part of the World Refugee Day celebration," said Ouedraogo.

In Milwaukee, the World Refugee Day event focused on celebrating the art and traditions of by refugees as well as the challenges they face.

Through a joint effort of the Ecumenical and Interreligious Office at the Archdiocese of Milwaukee and the Lynden Sculpture Garden, the interfaith prayers were accompanied by a bilingual reading from Claudia Orjulea; a workshop on carving a personal symbol with artist Daniel Minter; and a conversation with interdisciplinary poet Moheb Soliman.

The event's online component of the event included music from Hamid Ullah, a Rohingya musician and refugee from Buthidaung, Myanmar.

Stanley Cung, pastor of Emmanuel Chin Baptist Church in Milwaukee, a member of Myanmar's Chin ethnic minority, offered one of the Christian prayers during the interfaith prayer service.

Prior to the prayer, Cung shared his personal reflections: "Our country [Myanmar] has been under the military dictatorship of the government for so long and discrimination against minority groups and religions has been happening until now. ... But today I would like to encourage the people who have been suffering under violence and discrimination around the world. Let us not lose our hope. We have hope."

Dean Matthew Weiner of the Princeton University Office of Religious Life, one of those spearheading the event, explained that by putting together these services, the hope is that the network of refugee and religious groups in local communities is strengthened moving forward.

"Interfaith prayer is an important symbolic gesture for a particular cause or unity on an issue," said Weiner, "but it also results in planning and follow up in a way that naturally fosters civil society, creating new networks and deepening existing ones."