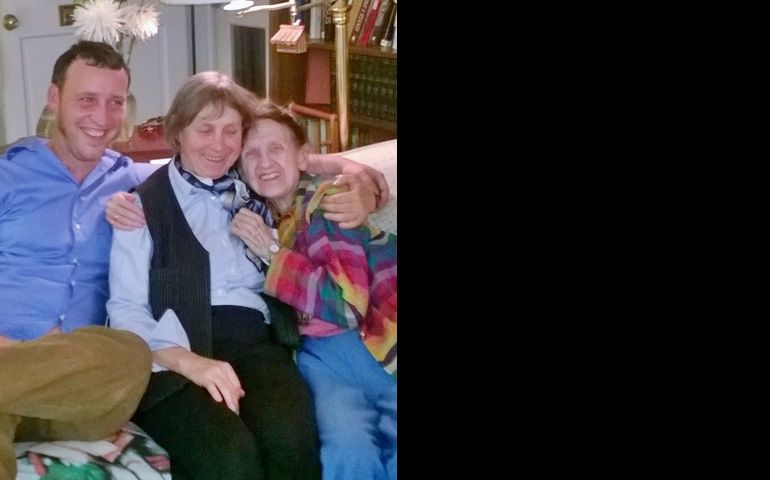 Beatrice Bruteau, a scholar, teacher, interspiritual pioneer, and intrepid explorer of the evolutionary edge of consciousness, died Nov. 16 at the age of 84. Her passing exemplified her signature brand of clarity, freedom and intentionality, traits that for more than five decades have been the hallmarks of her teaching presence among us and that she now bequeaths to us as both a legacy and a continuing invitation.

Mention the name Beatrice Bruteau, and I dare say that most Christian contemplatives will never have heard of her. She never attained the "superstar" status of a Thomas Merton, Thomas Keating, Bede Griffiths, or David Steindl-Rast. By her own choice, Beatrice preferred to remain slightly below the radar, where she exerted her quiet presence as one of the most powerful shaping influences on contemporary mystical theology, interspirituality, and contemplative practice. In her lifetime, she was a friend, colleague and mentor to all the people mentioned above (and dozens more of comparable stature) and a teacher to thousands of appreciative students, including me. Those who had the privilege of working with her directly speak of the clarity and precision of her mind, the luminosity of her vision, and the down-to-earth practicality of her contemplative practice.

Rigorously trained, she held two degrees in mathematics and a doctorate in philosophy from Fordham University. In addition to her highly articulate Christianity, she was also a longtime student of Vedanta and one of the early pioneers of East-West dialogue. She wrote books on Sri Aurobindo and Pierre Teilhard de Chardin and was one of the founders of the American Teilhard Association in 1967. Her most important works include Radical Optimism (1993), The Easter Mysteries (1995), What We Can Learn from the East (1995), and God's Ecstasy: The Creation of a Self-Creating World (1997). In all of these works, she brought her deep understanding of non-dual states of consciousness as well as her scientific training and rigor to the mysticism of the West.

Her passion was the study of evolutionary consciousness, and over the course of her long teaching career, she lived to see this passion come into its own as one of the most significant spiritual movements of our times. In particular, her influence on two fellow Fordham graduates, Ewert Cousins and Ilia Delio, has revolutionized the playing field upon which the venerable intellectual tradition of Catholic humanism is now unfolding.

Despite these stellar academic credentials, Beatrice chose to "think globally, act locally." For most of her long career, she lived in and around Winston-Salem, N.C., where she and her husband, Fordham professor James Somerville, founded the Schola Contemplationis, a center for the study and practice of the contemplative lifestyle according to the classical traditions of both East and West. For more than 30 years, their "mind-bending" monthly newsletter, The Roll, was painstakingly composed in their home office, run off on an old mimeograph machine, and hand-mailed to their small but devoted mailing list. A Southern lady to the nines, she dressed impeccably for every occasion, refused to travel by air, and insisted that coffee and tea be served in proper china cups, not in -- heaven forbid -- mugs!

My own relationship with Beatrice Bruteau began in the late 1980s, when I discovered her three-part article "Prayer and Identity" in the now-defunct Contemplative Review and had my spiritual universe quietly but completely overturned. Correspondence soon led to a personal visit and a mentoring relationship that would span the next three decades. I am honored to report that the very first public spiritual teaching I ever gave was at her behest, to her Schola Contemplationis group, in the early 1990s. In 2007, I was able in a small way to repay that gift when the Sewanee Theological Review invited me to republish her original "Prayer and Identity" article, together with a short commentary, in an issue dedicated to "Spirituality, Contemplation, and Transformation."

On a very personal note, the most powerful debt of gratitude I owe her was her unflagging support during the writing and publication of my first book, Love is Stronger than Death. Still in a very tender place following the death of my hermit teacher Raphael Robin, not fully trusting whether my spiritual intuitions of an ongoing journey between us were on target or simply a concocted fantasy, I shared the manuscript with her, and in a powerful way, she offered validation and the encouragement to continue. Her luminous support at this critical threshold of my life is one of the main reasons I am where I am today.

During this past decade, our connection grew a bit more tenuous as my life got busier and hers gradually became more concentrated around that final stage of the journey, "growing into age." In about the fall of 2013 I began to hear rumors that Alzheimer's disease was starting to affect her magnificent brain, and in spring 2014, following a conference in Greensboro, N.C., I was able to pay her what turned out to be a final visit. While it was indeed obvious that the disease was making some inroads on the habitual operations along the horizontal axis of life, as soon as we leaped into spiritual issues, her vast mind still took over like the lioness it was. Her teaching continued luminous and more and more vast.

Little did any of us at the time -- maybe even Beatrice -- suspect the final surprising denouement with which she would make her exit from this life. As it so happened, one of my younger students, Joshua Tysinger, had begun his seminary studies at Wake Forest, right there in Winston-Salem, at just about the time that Beatrice's life was rounding toward its end. I suggested -- and Josh was alert enough to follow up on the suggestion -- that having a world-class spiritual master right in town was an opportunity not to be missed. He began to pay her regular visits, and it soon became clear that a lineage transmission was in process. As Josh willingly and sensitively helped Beatrice and Jim navigate the horizontal axis, her brilliant final imparting of a lifetime of spiritual wisdom and spiritual fire (mostly over lunch at the K&W Cafeteria, with, yes, proper coffee cups!) is an exchange I suspect will not leave the planet unchanged.

I will leave this part of the story for Josh to tell in his own words when the right moment arises. For now, I would simply like to comment, from my own perspective, on what played out during the last three months of Beatrice's life. In late July, she suffered a fall and was hospitalized and in nursing care for several weeks thereafter. During this time, it seemed she was very much on the decline and "in transition." She ceased eating, and her already-slight frame shrank to 50 pounds. By October, a hospice worker had been called in, and Beatrice was seemingly hanging between the worlds.

Nine days before her death, she sat up, got up, resumed eating enough to sustain the physical body a bit longer, and began to teach and transmit in a luminous burst of continuing insight. It was as if the Alzheimer's had been left behind -- or perhaps, if truth be told, she had already "died" to this world and was returning, her own risen and christed self in her imaginal body, to complete what was needed vis-à-vis this earth plane. While others were astonished at her sudden "improvement," she had already been extremely clear with Josh that this wasn't what it was about; it would be an entirely different dimension manifest and operating in her. Teacher to the end, she left us with a luminous, stunningly hopeful demonstration of how a conscious death is already a risen life; the two are joined at the hip. With her final magnificent fusion of clarity, will and freedom -- all those qualities her spiritual practice had been about for more than half a century -- she went out like a bright candle, filling the whole room with the perfume of her realized being.

That being accomplished, she slipped away quietly into the night at just after midnight. Her last gift to us was a brilliant, living testimony to the triumphant reality of her two deepest convictions -- radical optimism and God's ecstasy -- carved in the final sacrament of her life.

[The Rev. Cynthia Bourgeault is an Episcopal priest, writer, and internationally known retreat leader. She is the author of eight books, including The Wisdom Jesus, The Wisdom Way of Knowing, The Meaning of Mary Magdalene, and The Holy Trinity and the Law of Three.]