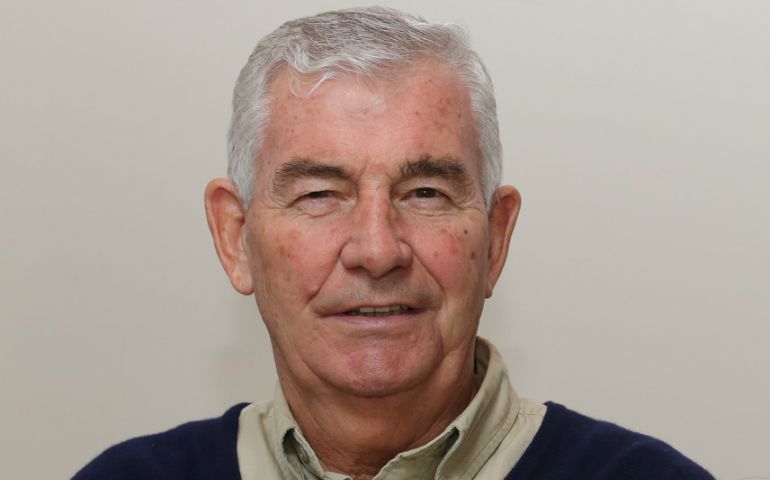 Columban Fr. Shay Cullen, founder and president of the PREDA Foundation, is pictured in a 2015 photo in Washington. (CNS photo/Bob Roller)

Ingolstadt — An Irish Columban priest based in the Philippines has received the A.K. Shalom Award for human rights, adding to his growing collection of international peace and justice awards.

Fr. Shay Cullen, 74, received the award May 6 at Germany's Catholic University of Eichstatt-Ingolstadt for rescuing minors from exploitation at the hands of sex traffickers, pedophiles, illegal detention and other forms of abuse.

In an email to Catholic News Service, the missionary priest said, "The victims of abuse and human trafficking deserve this award more than me or PREDA. They, by their resilience and strength, have made our work possible."

Cullen established the PREDA (People's Recovery, Empowerment and Development Assistance) Foundation in 1974 in Olongapo City, Philippines. The foundation runs programs that help the young people who are rescued to gain an education, receive therapy, formation and skills training.

Fr. Tom Glennon of the Nebraska-based mission center for Columbans is coordinating an event to market products for PREDA Fair Trade, a sister project of PREDA.

"It moves my heart to have a small part in (Father Cullen's) tremendous mission, and I have a lot of appreciation for him and the work that he does with PREDA and what he's been doing through the years," Glennon told CNS.

Cullen said he was "elated" the Shalom award committee decided to highlight the Philippines this year, because "the human rights situation (in the country) has greatly deteriorated," referring to the increasing number of deaths of drug users and dealers, mostly from the poorest parts of the country.

Since he took office last June, Philippine President Rodrigo Duterte ordered police and private citizens to kill drug pushers and users. According to Human Rights Watch, close to 8,000 people have died in both police anti-drug operations and unexplained circumstances.

"We need to speak stronger and louder," said Cullen. "We must never allow silence to make us part of the crime. ... We have to be prophetic and state clearly the rights of every human being no matter how poor."

PREDA says Cullen has received multiple human rights awards in at least five countries and has been nominated three times for the Nobel Peace Prize, all for his human rights endeavors. He is scheduled to receive the Dutch 2017 Martin Buber Award in November.

Visiting Thailand, Pope Francis to champion the poor and the environment