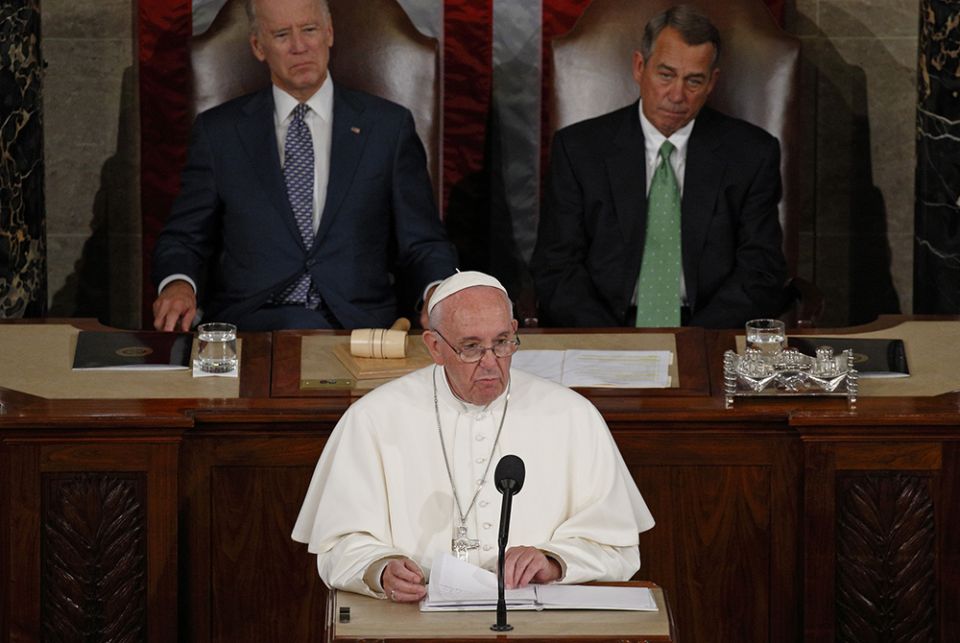 Pope Francis addresses a joint meeting of Congress in Washington Sept. 24, 2015. Also pictured are then-Vice President Joe Biden and then-House Speaker John Boehner, both of whom are Catholic. (CNS/Paul Haring)

In his new memoir, On the House, chronicling his 40 years in public service, former Speaker of the House John Boehner does not mince words about his former colleagues. 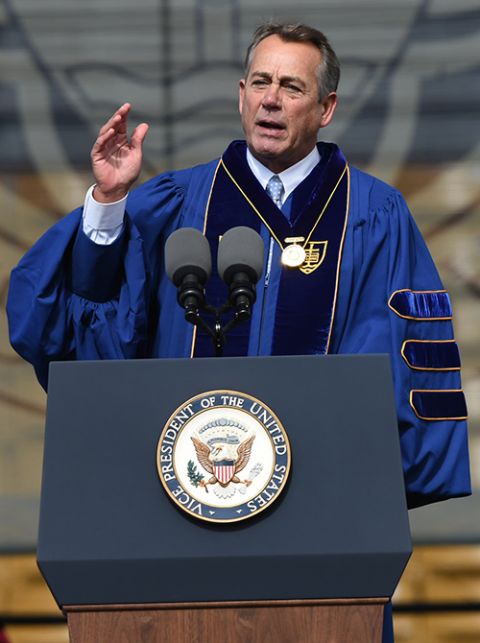 Former House Speaker John Boehner delivers an address after receiving the Laetare Medal during the 2016 commencement ceremony May 15, 2016, at Notre Dame Stadium in Indiana. (CNS/University of Notre Dame/Barbara Johnston)

He describes fellow Republicans who opposed President George W. Bush's stimulus package as being from "Crazytown." The Tea Party is labeled as the "chaos caucus." And when he gets to Texas Sen. Ted Cruz, he pronounces him "Lucifer in the flesh" and uses other words unfit to print in these pages.

As for President Joe Biden, whom he's known for 30 years and with whom he shared the 2016 Laetare Medal from the University of Notre Dame, Boehner is equally succinct. In an interview with NCR, he assessed Biden as "a good man, a good Catholic and a good politician."

Boehner, a former altar boy from Ohio who rose through the ranks of Republican politics, says he has no desire to get dragged into intra-ecclesial politics or criticizing Catholic bishops, so he refuses to weigh in on the debates over whether Biden should be denied Communion.

"I'm not going to get in the middle of that," he says. Yet then he adds: "But being Catholic is more than about one issue. Let them say whatever they want to say. At the end of the day, Joe's got to answer to the big guy just like we do."

And just to be clear, Boehner remains unapologetic about his opposition to abortion, describing himself as "very pro-life," and noting that he grew up with 11 siblings. At a time when the Hyde Amendment, which bans federal funding for abortion, is losing support among some politicians, including Biden, he reiterates that it has "saved millions of millions of kids that wouldn't be on our earth without it" and he believes efforts to get rid of Hyde will fail.

Interview with John Boehner: Joe Biden is "a good Catholic"

Boehner resigned from Congress in 2015, and looking back on his departure as speaker of the House, it is inextricably linked to his Catholic faith, which he says anchored him with a "sense of purpose and a sense of direction." On Sept. 24 of that year, he fulfilled a lifelong dream of having a pope address Congress. Having completed that goal, the next day, on Sept. 25, he announced his resignation.

Getting to that day, however, was no easy feat.

"Being Catholic is more than about one issue. Let them say whatever they want to say. At the end of the day, Joe's got to answer to the big guy just like we do."
—John Boehner

Back in 1995 when word got out that he had invited Pope John Paul II, he was summoned to then-Speaker of the House Newt Gingrich's office for a meeting. He recalls arriving for the meeting without any advance warning as to why it had been called or who would be there. Upon his arrival, Gingrich turned the floor over to Richard Land, the then-head of the Southern Baptist Convention's public policy arm.

Land, and the other non-Catholic religious leaders on hand, had heard about Boehner's invitation to the pope and had a question for him: "We're just wondering whether you invited him here as the head of the Catholic Church or as the head of state," he recalls Land asking him. 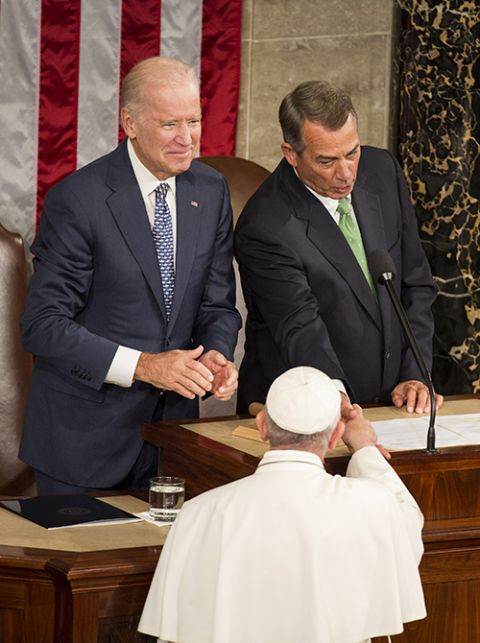 When Boehner told them he had invited the Polish pope to address Congress as a head of state, it seemed to put them at ease a bit. Pope John Paul II never accepted his invitations, but fast forward 20 years later, Boehner still gets weepy talking about that September day when Pope Francis arrived at the Capitol.

The pope's visit was the fruit of a collaboration with Cardinal Donald Wuerl, the then archbishop of Washington, who met with Boehner in February 2015 ahead of a trip to Rome, where Wuerl told the speaker he would raise the matter with Francis. A week later, Wuerl called Boehner from the Vatican, swearing him to secrecy, to inform him the pope had agreed to his request.

Seven months later, after a joint address to Congress, Boehner found himself alone with Pope Francis standing under the Capitol rotunda just before his departure ceremony.

"I look around and it's the pope and me. There's not another soul. And the pope looks at me, and he gets his glint in his eye and he takes his left hand and grabs my left shoulder and pulls me right up next to him and started saying the sweetest things anybody's ever said," Boehner recalled. "Well, I was like a fire hose I was crying so hard. And then he's still holding me with his left arm and his left hand, and he put his right arm around me and just gives me this giant bear hug. He says, 'Speaker, will you pray for me?' "

Boehner says he continues to make good on that promise to pray for the pope. But he also recalls having to face the cameras as the two left the Capitol together. "I looked like a drowned rat. I was emotionally spent."

"I look around and it's the pope and me. There's not another soul. And the pope looks at me, and he gets his glint in his eye and he takes his left hand and grabs my left shoulder and pulls me right up next to him and started saying the sweetest things anybody's ever said."
—John Boehner

In On the House, Boehner notes that one of the reasons Pope Francis said he was keen to accept the speaker's invitation is that he had heard about Boehner's across-the-aisle collaboration with the Democratic Sen. Ted Kennedy, which included working together to support inner-city Catholic school children in Washington, D.C.

When asked whether he thinks such collaboration would be possible today, the usually optimistic Boehner is skeptical.

"They used to call us the political book ends in Washington," Boehner says of his late friend. "Today, there's too much media, whether it's social media or real media. And, secondly, the news is instantaneous and as a result doesn't allow room for things to develop, relationships to develop or agreements to develop without both sides, you know, trying to tear it apart before it's even been hatched, for God's sake."

Throughout his book, Boehner offers a bruising assessment of today's Republican Party, although he says some of the recent commentary about democracy being under assault is "hyperbole."

"America's knitted together much stronger than that a lot of people realize. And I do think that Americans are the most resilient people that God ever put on earth," he said. "We make our share of mistakes, but you know we figure out what our mistakes are and we correct them. Our democracy is going through a bit of a test. I don't think it's as severe a test as some want to believe, but we're going through a test. But frankly, I'm very confident that we'll come through it just fine." 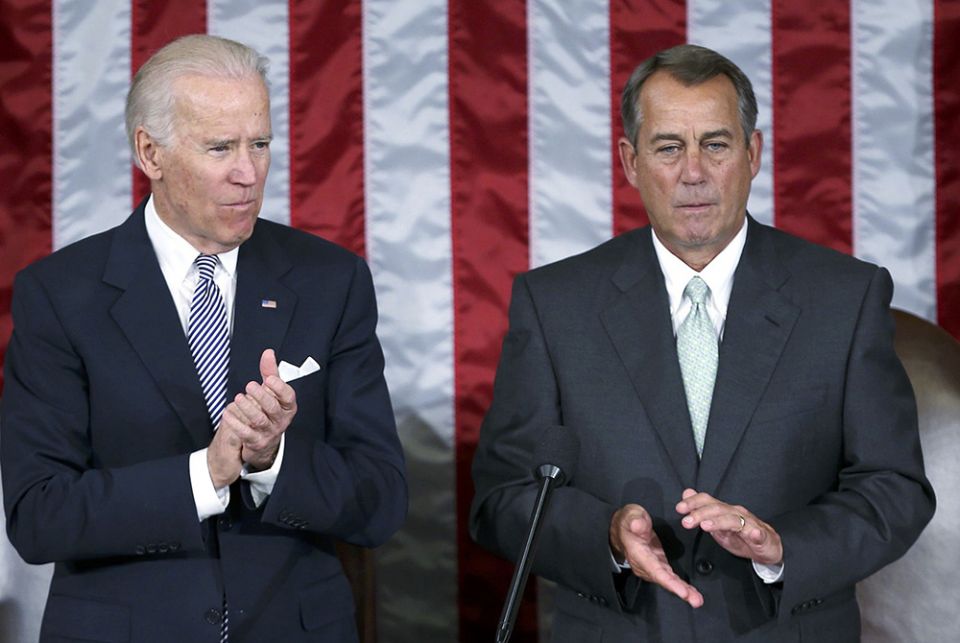 Then-Vice President Joe Biden and then-House Speaker John Boehner are pictured in 2013 during a joint meeting of Congress. (CNS/Reuters/Gary Cameron)

So what does he predict in the years ahead for his old pal-turned-President Biden? Boehner shies away from specifics.

As for how that might be accomplished, he gives a slight nod to that Catholic principle of working for the common good by trying to find common ground.

"Ted Kennedy and I couldn't agree on a whole lot. Our policies were very different. Barack Obama and I have very different policies. The issue is, where's the common ground?" said Boehner. "Finding the common ground that allowed us to do good things on behalf of the American people. That may be more difficult today, but it's not impossible."

"Our democracy is going through a bit of a test. I don't think it's as severe a test as some want to believe, but we're going through a test. But frankly, I'm very confident that we'll come through it just fine."
—John Boehner

A version of this story appeared in the July 9-22, 2021 print issue under the headline: John Boehner: Joe Biden is 'a good Catholic' .

Black and brown bodies among us in the body of Christ

Synod's purpose to underline protection, importance of marriage and family as an institution, Marx emphasizes