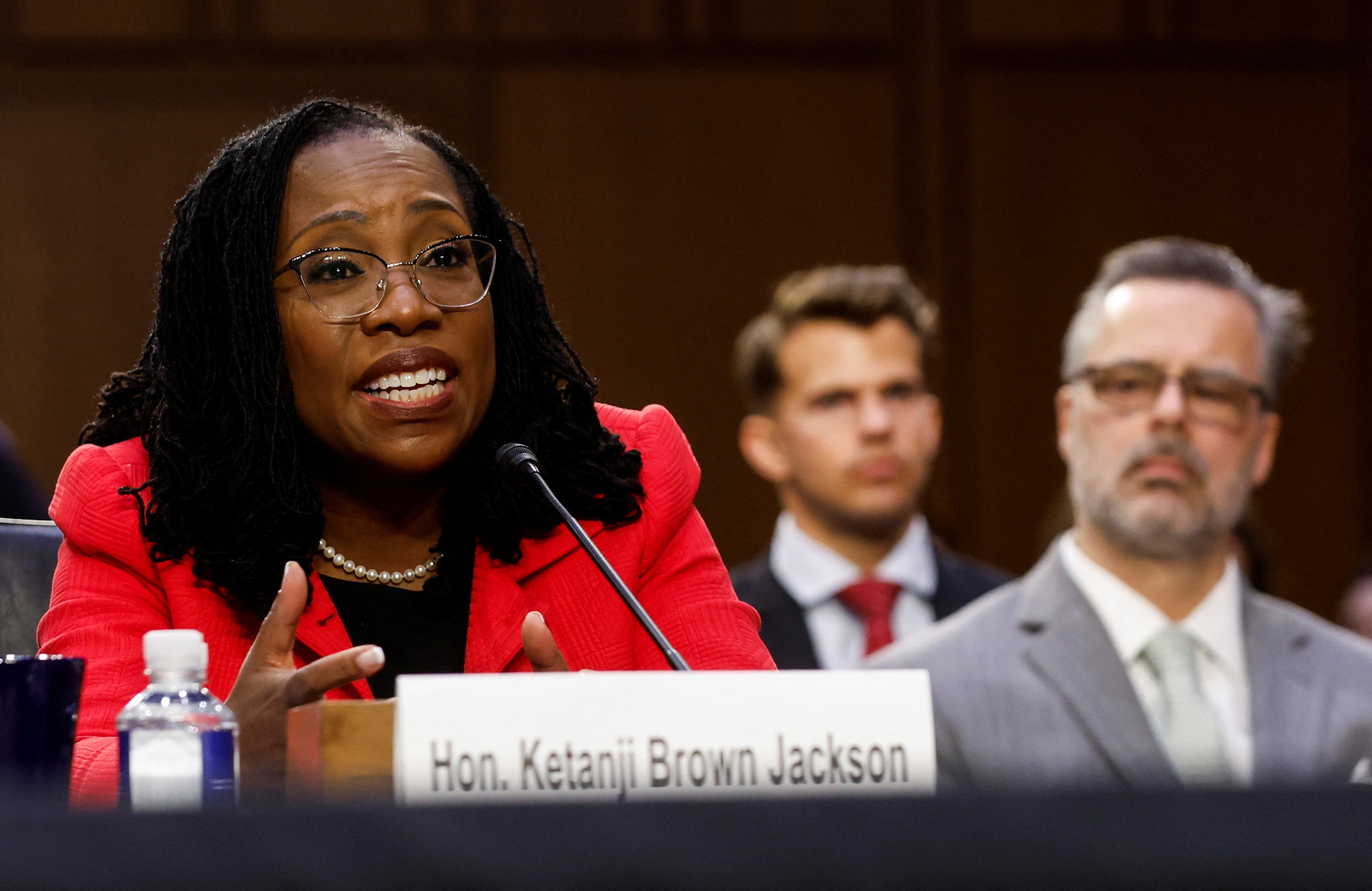 WASHINGTON — When she spoke at the first day of her Senate Judiciary Committee confirmation hearing as a nominee for Supreme Court justice, Judge Ketanji Brown Jackson stated her belief in God and her gratitude for divine blessings.

"I must also pause to reaffirm my thanks to God, for it is faith that sustains me at this moment," she said on March 21. "Even prior to today, I can honestly say that my life has been blessed beyond measure."

"I must begin these very brief remarks by thanking God for delivering me to this point in my professional journey," said Jackson after thanking Biden and Vice President Kamala Harris during the Feb. 25 speech. "My life has been blessed beyond measure, and I do know that one can only come this far by faith."

"She's a very sincere person so I believe that was in her heart to say," said Rutledge, who lived in the same dorm and attended the same core classes with Jackson, an appellate court judge named by Biden to succeed Justice Stephen Breyer.

"I think being a Black woman in the legal field, which can sometimes be hostile," added Rutledge, "it does take faith."

But Rutledge, now a professor of law at South Texas College of Law Houston, like many other admirers and supporters of Jackson, 51, does not know the details of her college friend's religious practice, though she considers her to be "a woman of strong faith, strong Christian faith." Rutledge, who is Facebook friends with Jackson, said she doesn't recall whether or not Jackson, who "spent a lot of time with her studies," attended a local Black church with her and some other Black students during their first year of law school.

She said Jackson — who would become the nation's first Black female Supreme Court justice if confirmed — was not overtly expressive of her faith when they were in school together in the 1990s.

"The way that we express our faith is not just through words but by actions," said Rutledge, describing Jackson's kind and supportive ways, including making sure Rutledge had enough pencils before a civil procedure exam. "And she certainly had the heart of a Christian."

Scant details of Jackson's past or present faith are available, most of them drawn from a few speeches in a 2,086-page document from the Senate Judiciary Committee. Others questioned by Religion News Service could not describe her current religious practice, if any.

A staffer at the Senate Judiciary Committee could not comment further on details about Jackson's faith.

"I don't have direct knowledge of any disclosure regarding religious affiliation," the staffer said. "All official correspondence with the Committee is within her questionnaire and attachments, so if she has, they'll be in there."

The Rev. Leslie Watson Wilson, national director of People for the American Way's African American Ministers in Action, cited Jackson's faith statement at the nomination announcement and said she hadn't learned more about Jackson's religious persuasion, adding she suspects Jackson or others who know her may be preventing her from being "stigmatized or put into a particular box" about her faith since critics are already casting her as liberal or radical.

"It's one of those things where we are going to have to respect her privacy," Wilson said.

In 2020, at an awards dinner where she was honored by the University of Chicago's Black Law Students Association, Jackson said: "In my faith tradition, it is said that to whom much is given, much is expected. I take that to mean that we who have benefited have a responsibility to give back to our community in whatever way we can, and I feel very strongly about that obligation."

She expressed those same sentiments — almost completely word for word — the previous year when she keynoted a legal firm's retreat.

Just as she expressed gratitude for the spirituality at her roots on the day of her nomination to the Supreme Court, she likewise mentioned her parents, aunts, uncles and grandparents "instilling the values of faith and family" when she spoke at her 2013 investiture ceremony of the U.S. District Court for the District of Columbia.

In turn, she told her daughters, then "on the verge of tweendom," that she hoped they would learn lessons from her experience: "Work hard, be kind, have faith, and remember that all things are possible."

On Monday, as Jackson's confirmation hearings were set to begin, religious leaders joined others in rallying to support her, focusing on her record and expertise.

"You have opened doors for her," Wilson said in a prayer of thanksgiving at the start of a rally in front of the Supreme Court featuring organizations that have been advocating for a Black woman to serve on the Supreme Court. She listed Jackson's numerous legal roles and sought divine assistance in bringing Jackson "to the next level."

Heather Taylor, a social justice commissioner of the Progressive National Baptist Convention, emphasized Jackson's perspective and qualifications at a news conference held by her historically Black denomination on Capitol Hill on Monday. Citing Jackson's education, clerkships for federal judges and service on federal courts and as a federal public defender, Taylor said "perspective matters" when justices consider voting rights legislation and cases that could have an adverse effect on marginalized people.

"I am not here today to degrade or denigrate or put down the moral compass or perspective of the white men but rather to say that the integration of the perspective of the Black woman, who has rightfully been dubbed in this nation as the conscience of America, is long overdue," she said.

The speech included in the Judiciary Committee records where Jackson expounded most on faith was at the 2011 graduation ceremony at Montrose Christian School, a now-defunct Maryland school on whose inaugural advisory board she was a member prior to becoming a federal district judge.

"You are here in the sanctuary of Montrose Baptist Church, in the shadow of the Cross, where people come to worship and give thanks," she said. "Remember that it is here, in the church, that your teachers, friends, and loved ones prayed for you and wished you well as you began this next phase of your life," she said. "When you're out there, and you're struggling (as we all do), look back — recall that you have never been alone, and be grateful for what God has done for you."

She recalled the prayers of her parents and remembered how, as a sobbing Harvard freshman undergrad turning 18, she was comforted by an answering machine message on which her mother sang for her. "Her song was the encouragement that I needed in that moment, and even in my loneliness, I thanked God for the opportunity he'd given me, for the firm foundation he had provided, and also for how far I had come."

Some anticipate that, as occurred when she was a nominee to the U.S. Circuit Court of Appeals for the D.C. Circuit, Jackson will be asked by senators about her connection to wording in a statement of faith on Montrose Christian's website, which included opposition to homosexuality and encouragement to "speak on behalf of the unborn." In response at that time, Jackson said she was unaware of the website declarations and added that in general, as a federal judge and pending judicial nominee, "it would be inappropriate for me to identify any statements or policy positions of those boards and indicate my personal agreement or disagreement with those statements."

March for Life, an anti-abortion group, was one of the earliest groups to state its opposition to Jackson's high court nomination.

"We expect her to be a reliable vote for the far left and the Biden administration's radical abortion agenda," stated its president, Jeanne Mancini. "We urge the Members of the Senate to stand for our nation's mothers and most vulnerable unborn by rejecting this extreme nominee, and we encourage the nomination of a judge who will honor our Constitution and the right to life."

Rutledge said such a stance is unfair to Jackson.

"I know, without any question, that Ketanji Brown Jackson is dedicated to the Constitution, the rule of law," Rutledge said. "She will decide cases based on the facts and the law, not an agenda. Now, is she going to be more progressive than the very conservative wing of the court? Probably, but she's also fair and dedicated to the law. So I think it's unfair to just say that she's already made up her mind about any issue."

During a White House "faith and community engagement call" in early March, administration officials thanked religious and nonprofit leaders for their actions on behalf of Jackson.

"We are continually grateful for the support she has received from this community. Please keep that coming as much as possible," urged Josh Dickson, deputy director of the White House Office of Faith-Based and Neighborhood Partnerships. "We know that it has meant a lot, especially in the face of some baseless attacks on her. She's an eminently qualified jurist and we look forward to her confirmation on the bench."