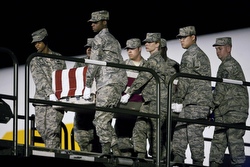 The coffin containing the body of U.S. Air Force Staff Sgt. Phillip Myers is carried by a transfer team at Dover Air Force Base in Dover, Del., in April 2009. (CNS photo/Joshua Roberts, Reuters)

PROVIDENCE, R.I. -- Serving at the Pentagon crash site and offering prayers for the dead as the remains of those killed in the 9/11 attack there were recovered, Father Robert L. Marciano will never forget the reverence with which the military cared for the remains of those lost in the line of service to their country that day.

So it came as a surprise to the chaplain when the U.S. Air Force acknowledged Nov. 8 that staff at its Dover, Del., military mortuary had lost body parts or mishandled the remains of soldiers killed in Iraq and Afghanistan after they were shipped home from the battlefield.

"In my experience, the military is usually so meticulous in identifying and handling the remains," said Father Marciano, who holds the rank of colonel and now serves as the state command chaplain of the Rhode Island National Guard. He also is pastor of Our Lady of Good Help Parish in Burrillville.

While also assigned to the Pentagon, he recalls how the military worked hard to ensure the remains of those killed in a helicopter crash in Iraq were brought home to their respective families.

"They found DNA and they went through great pains to make sure it was properly identified," he told the Rhode island Catholic, newspaper of the Providence Diocese. "A lot that happened at Dover goes against the grain of what we stand for."

Three supervisors at the Dover mortuary, which is operated by the Air Force, have been disciplined for the mishandling of remains.

According to an Air Force report, mismanagement at the Dover mortuary was to blame for the incidents, which included the sawing off of an arm so a body would fit into a casket.

Following the release of the report Nov. 8, Defense Secretary Leon Panetta called for a special review at the mortuary, to be completed within 60 days.

On Nov. 9, the Air Force indicated that prior to 2008, some body parts and tissue of deceased soldiers returning stateside were not identified in time to be returned to their families for burial, and were subsequently cremated and sent to a Virginia landfill for disposal.

After 2008, the Air Force said, that procedure was changed to allow for such body parts to be cremated and buried at sea.

"The lapses in our standards at Dover, which we sincerely regret, are our responsibility to fix," Air Force Secretary Mike Donley said in a statement released to the press.

A trio of whistleblowers who had witnessed the incidents of mismanagement at the mortuary brought the issue of problems at Dover to light.

The staff members disciplined for the incidents include Col. Robert H. Edmondson, who served as commander of the Air Force Mortuary Affairs Operations at Dover during the time the incidents took place.

Edmondson received a letter of reprimand, while Trevor Dean, his top civilian deputy, and Quinton Keel, mortuary director at the time, have been reassigned.

Father John Watterson, who retired in June 2008 as pastor of St. Mary, Star of the Sea Parish in Narragansett, recalled that in his experience as a chaplain tending to the wounded and fallen during the Vietnam War tremendous respect was always taken when handling the remains of the dead.

"This really surprised me. "I've been right there from the moment the soldiers have been killed, right through the burial process," he said.

"Believe me, the military does not treat bodies with disrespect. They have very exacting procedures," Father Watterson added.

He believes that while errors in handling remains in the heat of battle can certainly be understood, especially considering the damage being inflicted by the proliferation of improvised explosive devices on today's battlefield, military protocol should ensure soldiers' remains are properly honored.

"Maybe they got overwhelmed," he said, offering a possible explanation for the lapses at Dover.

Bishop Roque, who was episcopal vicar for Veterans Affairs in the U.S. Archdiocese for the Military Services, recalled that while serving at Fort Myer, adjacent to Arlington National Cemetery in Arlington, Va., he presided at many funerals and burials.

The bishop noted that the military "carefully maintains" cemeteries throughout the world.

"They have to see what happened and act accordingly, Bishop Roque emphasized, describing the work performed by mortuary employees as "difficult" and "challenging.

"People are human and can make mistakes," he said.