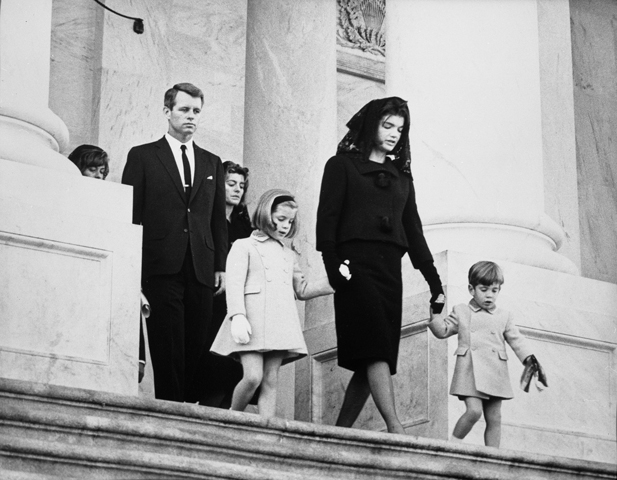 The letters exchanged by Kennedy and Vincentian Fr. Joseph Leonard, who died in 1964, are set to be auctioned in Dublin in June. Excerpts were published in The Irish Times newspaper.

One letter -- dated January 1964, just weeks after President John F. Kennedy was assassinated -- revealed how the tragedy left the first lady struggling with her Catholic faith. "I am so bitter against God," she wrote, but added, "only he and you and I know that."

She explained that she did not want to be bitter "or bring up my children in a bitter way" and was "trying to make my peace with God."

She wrote: "I think God must have taken Jack to show the world how lost we would be without him -- but that is a strange way of thinking to me."

Kennedy wrote in the same letter, "God will have a bit of explaining to do to me if I ever see him."

She asked Leonard to pray for her and said she would pray too in an effort to overcome her bitterness against God. "I have to think there is a God -- or I have no hope of finding Jack again," she wrote.

Leonard taught at All Hallows College, the Vincentian seminary in Dublin, and first met a young Jacqueline Lee Bouvier in 1950 when she visited Dublin. The two struck up an immediate friendship and corresponded regularly.

The letters reveal that Kennedy often turned to Leonard at times of darkness. In 1956, she wrote to the priest after the birth of a stillborn daughter, Arabella, and said: "Don't think I would ever be bitter at God." She observed that she could "see so many good things that come out of this -- how sadness shared brings married people closer together."

The letters reveal that Leonard rekindled Kennedy's interest in her Catholic faith. In early 1952, she wrote: "I terribly want to be a good Catholic now and I know it's all because of you. I suppose I realized in the back of my mind you wanted that -- you gave me the rosary as I left Ireland."

She was 22 and told the priest: "I suddenly realized this Christmas when my sister and I decided -- after not going to church for a year -- that we desperately wanted to change and get close to God again -- that it must have been your little prayers that worked -- all the way across the ocean."