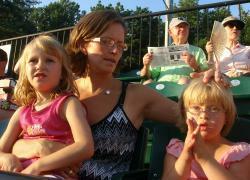 BETHESDA, MD. -- Haydee De Paula remembers the day her son, Ramon, then in elementary school, made up a song about the good things in his life. Moved by his words, she stopped cooking and grabbed a pen and paper to write it all down.

“He thanked God he was alive, playing on his guitar,” Haydee, 59, remembers. She thought, “My God -- how beautiful.”

Ramon was born with Down syndrome. As a boy, he once wanted to be a circus performer, then a firefighter and then a soldier. Now, at 26, he is a kind and sensitive young man who values his family and friends more than anything. Haydee said her son continues to inspire everyone he meets.

Meanwhile, parents of children with Down syndrome say medical professionals tend to emphasize the negative when counseling pregnant women. Several studies show that 80 to 95 percent of women who receive a definitive prenatal diagnosis of Down syndrome choose to end their pregnancies.

Haydee is one among many in families with Down syndrome members who are working to change stereotypes. Some are taking their experiences into the medical communities.

“He has made everyone more patient, persistent, conscious of what is important in life,” Haydee said of her son. “You do see that life is not about having things and acquiring status.”

Down syndrome is a common genetic condition that alters development and sometimes causes cognitive and medical problems, a result of having three copies of the 21st chromosome, instead of two. One in 733 babies is born with the condition, according to the National Down Syndrome Society.

After finishing high school, Ramon completed a specialized course of study at the local community college, and now has a full-time job as a file clerk at the Department of Veterans Affairs in Washington. His resumé, nearly two pages long, lists scores of jobs, volunteer activities, hobbies and awards. Between work, band practice, guitar lessons and volunteer work, he rarely has a moment to spare.

On a recent Saturday afternoon, just back from kayaking practice for the Special Olympics, he sits down with a binder of photographs, pointing out the highlights of his day-to-day life.

In one photograph, he is dressed in his Eagle Scout uniform, posing with his younger brother, Marcus. In another he is Santa Claus, sitting on top of a fire engine during the Glen Echo Fire Department’s Christmas program. He turns the page to a photograph of himself assisting his mother in the CCD classes she teaches at St. Bartholomew Catholic Church.

Soon he will volunteer again as an assistant coach for his former high school’s football team. And, somehow, he will fit in practice for the Special Olympics cycling club. How does he find the time and energy for all of this?

“I manage,” he says, a wide smile spreading across his face. “I’m busy all the time.”

Haydee, a member of the Down Syndrome Network of Montgomery County, Md., and support services coordinator at a local organization that supports people with developmental disabilities, said she and her husband, Ramon, a NASA project manager, want the same things for both of their sons: happiness, fulfillment, “and to do what they are meant to do as human beings in this world.”

Ramon has many gifts to share, Haydee said, but aside from the love and friendship he offers to those around him, he also helps people appreciate things they might otherwise take for granted.

“It helps us find our gifts if we find somebody who needs those gifts,” Haydee said. “This is what the world is about -- one helps the other.”

Dr. Brian Skotko, a physician at Children’s Hospital Boston and member of the National Down Syndrome Society board of directors, said more training and resources should be made available to help medical professionals understand the genetic condition.

Skotko, who five years ago conducted a survey asking mothers of children with Down syndrome how their physicians presented the information, found that the information many doctors gave provided was outdated and inaccurate.

“Physicians nowadays are not trained on how to deliver a diagnosis of Down syndrome, prenatally or postnatally,” he said.

According to several studies, conducted in Michigan, Atlanta, Chicago, Boston and the southeastern United States, 80 to 95 percent of women who receive a definitive prenatal diagnosis of Down syndrome choose to end their pregnancies, Skotko said, and an international study that used data from the United States, United Kingdom, New Zealand, France and Singapore found the worldwide figure to be approximately 92 percent. No national study has been conducted to date in the United States.

Both studies rely on data from diagnoses made using either amniocentesis or sampling chorionic villus cells found in the placenta, the only procedures currently available to diagnose Down syndrome, both of which carry a risk to the unborn fetus. But biotech companies are working on a noninvasive test they say would diagnose Down syndrome as early as the first trimester, by testing a blood sample from the mother.

If the test is perfected so that the information is accurate and available early enough for women to make a decision before they show signs of pregnancy, Skotko said, it is likely more will opt to take the test. He added that now, more than ever, “it’s incumbent upon the medical community that mothers are getting up-to-date [information].”

“The provocative question is, are parents truly making an informed decision when they decide whether to terminate the pregnancies?” Skotko said.

Mimi Gehres, a former marketing professional and current stay-at-home mom from Kensington, Md., is trying to close the information gap by organizing presentations to familiarize medical professionals with current research on Down syndrome. As chair of the Professional Outreach Committee of the Down Syndrome Network of Montgomery County, she also reaches out to prospective parents and new parents, to make sure they have all the necessary information to understand the condition.

Despite medical professionals’ tendency to emphasize the negative, Down syndrome is not “this scary thing,” she said. With early intervention, therapy and education, children grow up to lead productive lives and contribute to their communities.

Gehres, 39, learned of her daughter’s condition inside the delivery room. She said the hospital staff gave the diagnosis in a matter-of-fact tone and offered no support.

“We just felt like we were in the midst of the wilderness,” she said. “The whole world went silent and I could hear my heart beating in my head.”

But even as she and her husband, Ed, grieved the loss of the child they were expecting, “we were so enamored with her,” Gehres said. “She made us feel like it was going to be OK.”

Abby, now 7, has just completed first grade at her neighborhood public school, participating in a mainstream classroom for some of her classes and a special education classroom for others.

Gehres, who also has a 4-year-old son, said she would have wanted to take a prenatal diagnosis test before giving birth, but was afraid to take the risk. She said she would have chosen to have the baby regardless of the outcome, though her decision would not have been influenced solely by her Catholic faith.

“I actually believe strongly that life begins at conception,” she said.

Gena Mitchell, 37, said her first reaction to the news was shock. She had taken the AFP test -- a blood test that can determine if an unborn baby has Down syndrome, as well as testing for other conditions -- while she was pregnant with Devin. It came back negative.

“Initially, to be very honest, I think a lot of it is ego,” said the mother of three, who is president of the Down Syndrome Network of Montgomery County. But she and her husband, Brian, gradually came to terms with the situation. And because of Devin’s condition, Mitchell said they tend to notice and appreciate more the accomplishments of their two other daughters, 8 and 5 years old.

“I’ve had very good support, and a lot of it is luck,” said Mitchell, who is also Catholic. She had no complaints about the treatment she received during and after her delivery, but said few others had such a positive experience. She is happy that Devin, now 6, is healthy, that she eats well, laughs often and has many friends in their Bethesda neighborhood.

“She’s part of a community, and that was the goal from the beginning,” Mitchell said.

David Tolleson, executive director of the Atlanta-based National Down Syndrome Congress, said that -- in the absence of a comprehensive national study -- there is no conclusive evidence that proves that more mothers are terminating their pregnancies after taking a diagnostic test and learning their unborn child has Down syndrome. A noninvasive diagnostic blood test performed early in the pregnancy could influence a mother’s decision in two ways: It would give some women the option to terminate a pregnancy before anyone becomes aware of it, but it would also give expectant parents more time to make an informed decision.

“So that’s where giving them accurate, nondirective information is going to be all the more important for people who just want the facts, so they can make up their own minds,” he said.

But the noninvasive diagnostic test currently in development has apparently raised some eyebrows in the ethics community.

The test is being viewed as the “canary in the coal mine,” Tolleson said. If parents have the option to terminate a pregnancy early based on a diagnosis of Down syndrome, could autism come next? And what about physical characteristics?

“I think, for ethicists, it’s really an area that’s of great concern looking forward,” he said. “Has our technology outpaced our morality?”

Alice Popovici is an NCR contributor based in Washington.

Program launched in California to address critiques of Serra

Rural ministry as varied as life itself

Your thoughts on NCR's 2021 newsmaker of the year