Malta's loss will be university's gain 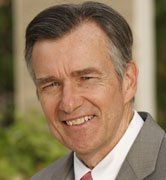 This month, a familiar face will be back at the lectern at Pepperdine University: Douglas Kmiec, who resigned as ambassador to Malta in May, returns to the West Coast law school this autumn.

In May, a critical internal State Department review asserted Kmiec was spending too much time on matters other than bilateral relations, giving speeches and writing articles about interreligious dialogue, for example. Instead of contesting the review, or following the age-old diplomatic practice of ignoring such reports, Kmiec tendered his resignation. If he hoped the resignation would be rejected, he misjudged the situation. State Department officials are disinclined to take on a report they generated, and the White House, although indebted to Kmiec for his support in 2008, had bigger fish to fry these past few months.

Still, the report criticizing Kmiec seemed unfair. His work on interreligious dialogue seemed a natural for the island nation, which sits at the crossroads of many cultures. More importantly, Kmiec’s efforts merely put into practice what President Obama called for in his 2009 speech in Cairo, Egypt. (As well, Malta has about 400,000 people, fewer than Kansas City, Mo., so it is doubtful bilateral relations would exhaust anyone’s intellectual energies.) But bureaucracies are slow-moving creatures, and the midlevel staffers who wrote the report criticizing Kmiec have failed to catch up with the realities of diplomacy in our day, still less with the president’s insights into the importance of interreligious dialogue for advancing peace.

Since Kmiec’s resignation, there has been an outpouring of statements attesting to his effectiveness in Malta. The papal nuncio noted many of Kmiec’s accomplishments, including the completion of a new embassy complex, his efforts to help Maltese and other Mediterranean countries stop human trafficking in the region, and Kmiec’s work on a strategic plan for the Mediterranean region in advance of the “Arab Spring” uprisings.

The nuncio also cited Kmiec’s work with refugees from Libya. “When the dangers in Libya rose to unsafe levels, and regular means of transport had been foreclosed, Ambassador Kmiec innovatively engaged a ferry service to rescue several hundred evacuees, including virtually all of the U.S. embassy personnel in Embassy-Tripoli, as well as citizens of a wide range of third countries: such as Malta, Canada and Australia,” Archbishop Tommaso Caputo wrote. “The rescue, humanitarian and coordination roles of Ambassador Kmiec’s embassy became so pivotal that when a budget impasse in Washington threatened a government shutdown, the embassy in Malta was one of the few embassies not shuttered since it had been designated by Secretary [of State Hillary] Clinton as ‘essential’ and necessary to stay at 100 percent functionality.”

Kmiec’s efforts to confront human trafficking also earned praise from the U.S. State Department. A July cable from Clinton stated: “The Embassy’s consistent efforts to advance U.S. anti-trafficking goals have resulted in high-level Maltese government attention to trafficking in persons, including the appointment of a national anti-trafficking coordinator and the establishment of a working group.”

Perhaps the highest praise for Kmiec came not from any government officials but from Sr. Rose Oliveri, a Salesian sister from the United States who has lived in Malta, on the island of Gozo, for more than 40 years. Oliveri was born in Brooklyn, N.Y., on March 27, 1916, but she is a very young 95 years old. She told me, “Many people said, ‘We never knew we had an American ambassador before.’ I can sincerely say that for myself.”

Oliveri told me about her first meeting with Kmiec. It was July 6, 2010. “I received a telephone call from the embassy saying, ‘If it is not inconvenient for you, the American ambassador will be there arriving in Gozo with the 15:45 boat.’ Naturally, I was very pleasantly surprised,” Oliveri recalled. “In my 47 years here I had never met nor seen an American ambassador! Coming to Gozo from Malta can be very tiring, particularly in summer. It is at least a two-hour trip from start to destination. The ambassador had a Fourth of July celebration planned at the ministry in Gozo, where he met one of our past pupils, who told him there was an American sister in Gozo. Two days later there he was to visit a rather alone but happy American sister.”

Oliveri expressed the hope that the State Department would decline Kmiec’s resignation, but that was not to be. He will be back in Southern California teaching this autumn.

Msgr. Charles Antonicelli, an adjunct law professor at The Catholic University of America in Washington, recalls working with Kmiec when he was dean. “His students loved him both for his scholarship and for his Christian concern for them as human beings,” Antonicelli told NCR. “That is the silver lining here: Doug is getting back in the classroom. Malta’s loss will be Pepperdine’s gain.”