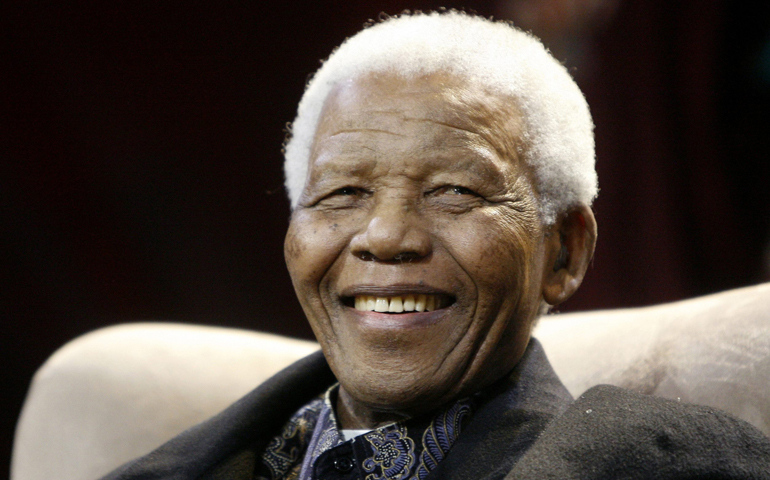 Nelson Mandela spent 27 years in prison to emerge an international icon -- and become the first black president of a democratically elected government in South Africa. He died Thursday at his home in Johannesburg at age 95.

The role played by the clergy in the creation of a "new" South Africa -- and Mandela's innate faith in God -- remains an untold, yet pivotal, chapter in his story. In his declining years, presidents and kings came to pay homage. In life, it was to churchmen he turned for advice.

When Mandela was released from prison Feb. 11, 1990, the white minority government was well aware that the only way forward would be a negotiated dispensation that would ensure equal rights for all.

For South Africans, fueled by generations of racial division and mistrust, the task ahead was formidable. But when Mandela stood outside Cape Town City Hall to address the thousands who had come to see him on the day of his release, his message was not one of anger or revenge, but of reconciliation and peace.

"Today the majority of South Africans, black and white, recognize that apartheid has no future. It has to be ended by our own decisive mass action in order to build peace and security," he told the jubilant crowds.

The negotiations were not destined to be peaceful. Almost from the start, violence flared up between the Mandela's African National Congress (ANC) and the mainly Zulu Inkatha Freedom Party with suspicions of a third force sponsored by the white minority government at work.

In one of the worst cases, on the night of Jan. 12, 1991, 39 people were killed in Sebokeng outside Johannesburg. There was trouble in 27 townships around South Africa in the next few years, leaving hundreds dead.

But it was the assassination of Chris Hani, leader of the South African Communist Party, by white right-wingers that brought the country to the brink of civil war. Mandela saved the situation.

In a televised interview, he said he was reaching out to every South African, black and white, from the very depths of his being.

"Our grief is tearing us apart. ... What has happened is a national tragedy that has touched millions across the political and color divide," he told the nation.

Then, just as progress was being made, another problem arose, and the talks stalled again. This time, the proposed Truth and Reconciliation Commission, aimed at dealing with apartheid-era human rights violations, was the stumbling block.

The National Party government wanted the same blanket amnesty given the ANC -- with a guarantee of a general amnesty written into the interim constitution. Neither then-President F.W. de Klerk nor Mandela were ready to back down. The day was saved by the clergy.

The Franciscan archbishop of Durban, Wilfrid Napier, later to be cardinal, remembers there was a genuine fear that violence would erupt once again.

"We were afraid that if the holdup was not sorted out quickly, the fighting and the killing would start all over," Napier recalled. "So we approached de Klerk and Mandela and told them we knew they were having difficulty. Could we meet privately?"

The men agreed. After an afternoon with the churchmen, consensus was reached. De Klerk and Mandela decided to appear on television within 24 hours to tell the country how the problem would be solved. The nation could breathe again.

Although known to keep his religious views private, Mandela was ever mindful of the role the clergy could play in his vision for a nonracial South Africa. It was through church mission schools, he said, that he and his generation were educated.

Mandela was 7 years old when his mother enrolled him at the Clarkebury Missionary School in South Africa's Eastern Cape province. He continued his education at the Healdtown Methodist College, a boarding school started by missionaries in 1845.

In 1953, prior to the apartheid government's Bantu Education Act, 90 percent of black children were at state-aided mission schools. The act demanded that all such schools register with the state. Control of African education was removed from the churches and provincial authorities and centralized in the Bantu Education Department, a body dedicated to keeping it separate. Almost all the mission schools closed down.

The Catholic church was largely alone in its attempt to keep its schools going without state aid. The 1953 act also separated the financing of education for Africans from general state spending, linking it to direct tax paid by Africans themselves, with the result that far less was spent on black children than on white. Worse, black children could not be enrolled at "white" schools.

The rules applied equally to Catholic schools that faced closure if they were caught having enrolled black children. Somewhat nervously, the church tolerated the situation, but in the early 1980s decided to ignore the regulations. An increasing number of black boys and girls were enrolled at private Catholic schools. Surprisingly, the authorities turned a blind eye.

Mandela completed his Bachelor of Arts studies through the University of South Africa then enrolled at the University of the Witwatersrand to study law. His university life, however, was interrupted by his involvement with the ANC.

Later, he and his friend Oliver Tambo opened the first black legal practice in South Africa. However, he continued to be involved in the liberation struggle and was arrested in 1962. Two years later, he was found guilty of sabotage and sentenced to life imprisonment.

Before being found guilty, he made a statement that has lived on in the minds of South Africans: "I have fought against white domination, and I have fought against black domination. I have cherished the ideal of a democratic and free society in which all persons live together in harmony and with equal opportunities. It is an ideal which I hope to live for and to achieve. But if needs be, it is an ideal for which I am prepared to die."

After Mandela was elected president following South Africa's first nonracial elections in 1994, he maintained close contact with the clergy, holding regular quarterly meetings with them.

"He had a mind as clear as bell," Napier said. "It was obvious that his Christian formation was the source of his inspiration."

In 1993, Mandela attended Mass celebrated by Archbishop Lawrence Henry and parish Capuchin priest Fr. Wildrid Aherne at St. Mary of the Angels in Cape Town. At the service, he singled out priests who had visited political prisoners on Robben Island, at the Pollsmoor Prison in Cape Town, and in Pretoria.

His friendship with Archbishop Stephen Naidoo of Cape Town is reflected in a letter he wrote in November 1984. The contents were published for the first time in The Southern Cross, South Africa's Catholic weekly, in 2009 to mark Mandela's 90th birthday. Handwritten, it was headed with Mandela's prison number: D220/82. In it, he told the archbishop that he had been uplifted by the pastoral care provided by clergy on Robben Island, where he was spent 18 of his 27 years of imprisonment.

Naidoo, who under apartheid laws was classified an Indian, became friends with Mandela before his appointment to Cape Town. Then auxiliary bishop, Naidoo regularly made pastoral visits to Robben Island.

In Mandela's letter to Naidoo, he said news that his friend had been appointed archbishop of Cape Town "pleased me beyond words."

"The elevation of black personalities to positions of authority in the church is a development which has far wider significance than many people may realize," Mandela wrote.

"For one thing, it will remove a sensitive problem which has repeatedly rocked South African churches, kept each congregation divided against itself, and generated strong, and even violent, passions not compatible with the teachings of the scriptures."

In a response, dated Dec. 5, 1984, Naidoo said he was encouraged by the positive reaction to his appointment.

"It has helped so many to see the (Catholic) Church not as a foreign import, but as ours, rooted in our lives, in our needs, aspirations, sorrows and hopes," he said.

Naidoo did not live to see Mandela leave jail. He died suddenly at age 51 in July 1989, less than eight months before Mandela's release the following February.

At Mandela's presidential inauguration in 1994, when dignitaries from around the world gathered to witness him take the oath of office, he warned South Africans that reconciliation required working together to defend democracy and the humanity proclaimed by the new constitution.

"The further construction of that house of peace needs my hand. It needs your hand," he said.

Reconciliation and forgiveness were to be the cornerstone of Mandela's five-year term as president, with the focus always on nation-building. Aware that many whites, uncertain of their future under a black government, were planning to emigrate, he called on them to stay and help rebuild a democratic South Africa.

When Mandela was released from prison, one of his first trips abroad was to Rome, where he met Pope John Paul II in 1990. The two met again in 1995, when the pope visited South Africa.

There were many sides to Mandela that South Africans (of all races) came to love. One story told of a group of South African churchmen who arranged to meet Mandela for breakfast soon after his release. They chatted briefly before sitting down to their meal, but had no sooner lifted knife and fork when their guest stopped them.

"Gentlemen," Mandela said. "Surely we should say grace before we start eating?"

It was a gentle rebuke that had people chuckling at the embarrassed clergymen -- but was it true?

"Indeed it was," Napier said. "Mandela was a stickler for praying before meals."

But the cardinal has an even more heartwarming tale about Mandela.

In 2001, when Napier was at a meeting of the Southern African Catholic Bishops' Conference in Pretoria, he received a call from the papal nuncio, Archbishop Ambrose De Paoli, asking if he was alone. When he assured the archbishop he was, the nuncio confided that Pope John Paul was to proclaim him one of six new cardinals at 1 p.m. the coming Sunday.

He said no more as he waited for the official announcement. A day later, he missed a telephone call from Mandela, then in Mozambique. Uncertain of what the former president wanted, he tried to reach him -- without luck.

Mandela obtained the archbishop's telephone number by calling the cardinal's secretary, Colleen Mettler in Durban. Still in Mozambique, this time, Mandela was lucky. "Cardinal Wilfrid," he said when the connection was made. "I hear you have been proclaimed a Prince of the Church. I am so very pleased. Congratulations!"

At a special United Nations gathering to mark Mandela's 95th birthday in July 2013, former U.S. president Bill Clinton recounted a story about the elder statesman ending his 27 years in jail "a greater man than he went in."

Clinton said he'd asked Mandela why he had invited his jailer to his inauguration and brought white opposition parties into his government.

"Tell me the truth: When you were walking down that road, didn't you hate them?" Clinton asked Mandela.

"He said briefly: 'I did. I am old enough to tell the truth.' He said, 'I felt hatred and fear but I said to myself, if you hate them when you get in that car you will still be their prisoner. I wanted to be free and so I let it go.' "

[Winnie Graham in Johannesburg is a retired Catholic assistant editor of The Star. Graham was a young reporter when Nelson Mandela was charged with sabotage October 1963. Her husband was one of a team to cover the famous trial. She was at The Star when Mandela was released in 1990 and this year, her journalist son, Stuart, will cover his funeral.]