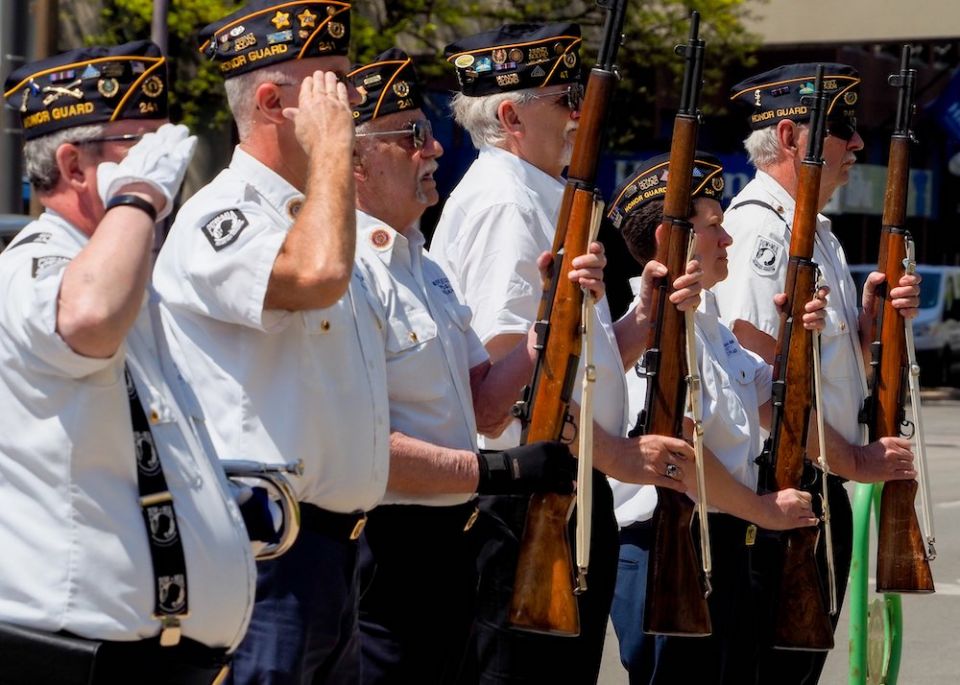 The honor guard from American Legion Post 241 in Fort Wayne, Indiana, renders military honors for a veteran at a funeral at the Cathedral of the Immaculate Conception May 14, 2021. (CNS/Today's Catholic/Jennifer Barton)

Fort Wayne, Indiana — The inception of Memorial Day goes back to the bloodiest conflict in U.S. history, when Americans slaughtered their countrymen by the thousands in single-day battles — the Civil War.

Even prior to the end of the war, civilians — particularly women — in both the North and the South began decorating gravesites in honor of those lost in the deadliest days the nation has ever seen.

In the years following, numerous cities on both sides of the conflict began holding "Decoration Day" services at various times throughout the year, honoring military servicemen from any war. This gradually came to be called Memorial Day. These celebrations eventually merged into a nationally recognized holiday falling on May 30, before being codified into law in 1968 to fall on the last Monday of May.

People still uphold this practice of remembering and praying for loved ones who have died.

Miller and his staff are dedicated to presenting immaculate grounds when families come out to honor their departed loved ones. They provide flags at both entrances to the cemetery for families to place at the gravesites of veterans.

Typically, it is intended as a time to honor those soldiers who have made the ultimate sacrifice for their country, though any veteran who served in a military branch for at least two years is eligible for a military funeral.

When a veteran's family makes funeral arrangements for their loved one at Divine Mercy, Miller's team arranges for military honors for that person, he told Today's Catholic, newspaper of the Diocese of Fort Wayne-South Bend. "That's a burden we take off the family."

The honor guard he usually contacts is the American Legion Post 241 in Fort Wayne. John Smeltzer is the honor guard director for the post, and it is his duty to set up the veteran-comprised guard for each military funeral that they are called to serve.

"I love what I do. We feel it's our duty to do that for fallen veterans," he said.

Some honor guards will only serve certain branches of the service, but Smeltzer is proud that his post will honor any veteran with the proper respect and formality due to them. "We are there for the veteran."

The honor guard itself is "a team of eight people: the commander, chaplain, bugler, rifle commander and four riflemen" who carry M1-A1 carbines, the weapon typically used by soldiers in World War II and the Korean War. 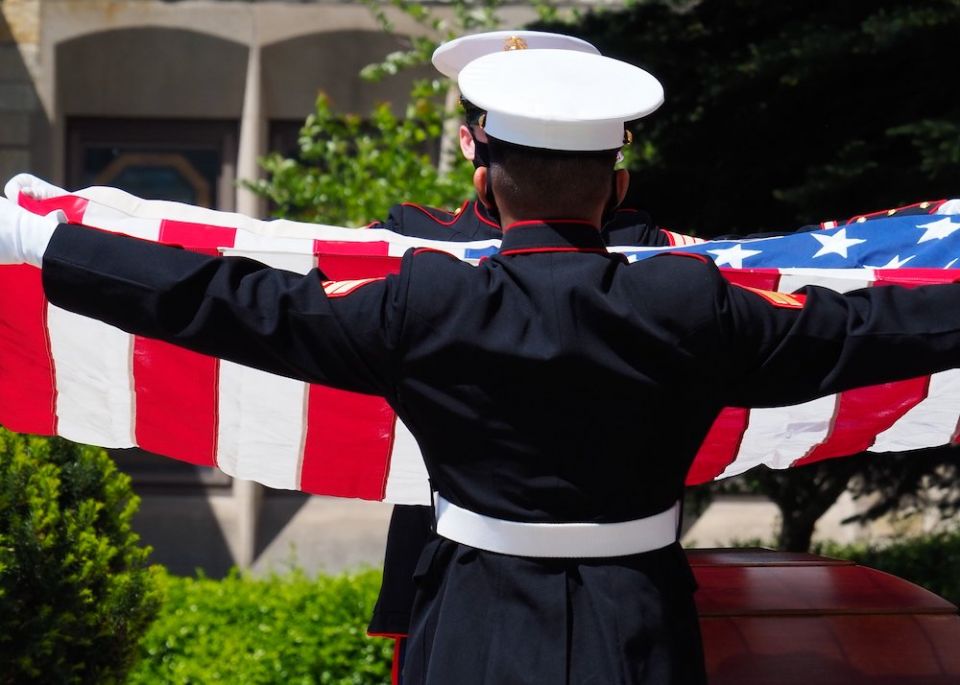 The honor guard from American Legion Post 241 in Fort Wayne, Indiana, renders military honors for a veteran at a funeral at the Cathedral of the Immaculate Conception May 14, 2021. (CNS/Today's Catholic/Jennifer Barton)

After the commander recounts the veteran's time in the service and the chaplain recites a prayer over him or her, the commander issues the call for the riflemen to render a three-volley salute.

Then the U.S. flag that has draped the service member's coffin is folded and presented to the closest family member with the words: "On behalf of the president of the United States, (service branch) and a grateful nation, please accept this flag as a symbol of our appreciation for your loved one's honorable and faithful service." The family is presented with a ceremonial brass shell casing.

This is probably the most emotional part for families. Smeltzer remarked, "Some people break down, others are pretty stoic."

Miller also has witnessed many such military funerals and the reactions of families.

"What I find is it's different for older people versus younger people," he said. "For older people that have lived through wars ... there's a certain respect when it comes to the honor guard or the military service that you recognize the sacrifice that that individual made of their early life to serve and protect our freedoms. Younger people, however, I find that it's a learning experience — and a good one, at that."

He described younger generations seeing "the folding of the flag and hear 'Taps' being played and it drives home the sacrifices that they haven't experienced or seen firsthand ... and it brings home that that person gave up two years plus of their life for our freedoms and we better protect it, and we better show respect for that individual." 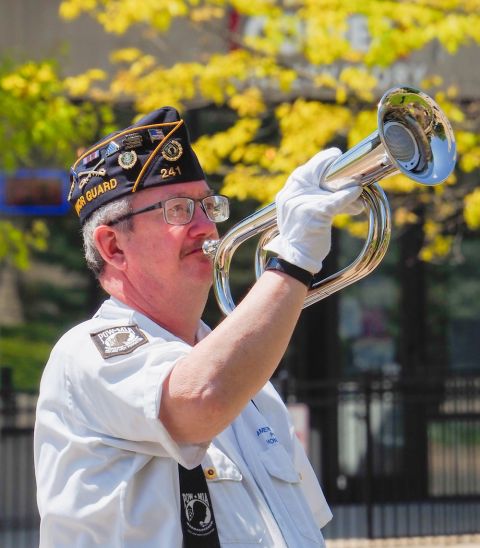 A bugler from the honor guard of the American Legion Post 241 in Fort Wayne, Indiana, renders a military tribute for a veteran at a funeral at the Cathedral of the Immaculate Conception May 14, 2021. (CNS/Today's Catholic/Jennifer Barton)

Vince LaBarbera, former director of communications for the Diocese of Fort Wayne-South Bend, is a member of a group called Buglers Across America. Founded in 2000, Buglers Across America's purpose is to honor every fallen veteran with the proper ceremony due to him or her by having an in-person bugler at funerals.

In an article for The Waynedale News, a local paper, LaBarbera said he was a student at Central Catholic High School in Fort Wayne in the 1950s when he began playing "Taps" for funerals.

As a member of the school band, the school's principal at the time, Msgr. William Lester, requested that LaBarbera play "Reveille" during the morning announcements.

"As part of the privilege of sitting first chair in the trumpet section, it was my honor to often play 'Taps' at the burial of a military service veteran," he said. An American Legion honor guard would drive him to various cemeteries, where he would play the melody, then return him to school.

"Not only was it an honor, of course, but I was thrilled to get out of classes for a couple of hours," he joked.

LaBarbera told Today's Catholic that "a new tradition was begun last year on Memorial Day — and I hope it continues this year — for buglers to play 'Taps' at 3 p.m. nationwide. I plan to do that in front of our house."

[Jennifer Barton is a staff writer at Today's Catholic, newspaper of the Diocese of Fort Wayne-South Bend.]