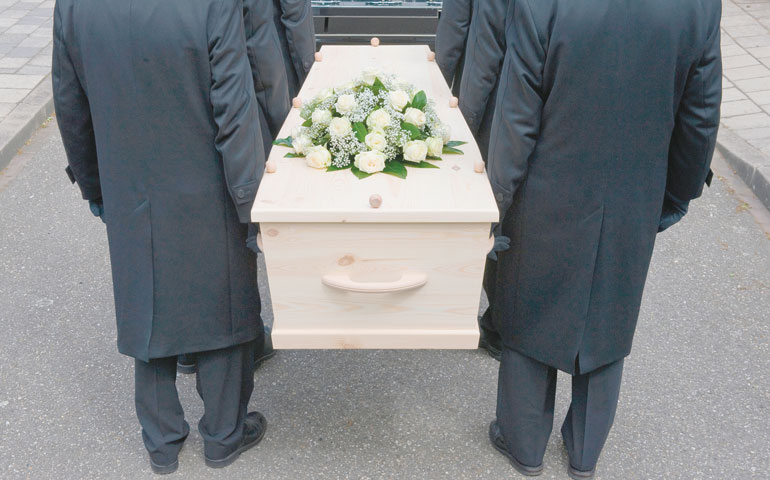 When I heard that my friend Linh's father had passed away, I knew I wanted to go to the funeral. Her father, who had fled Vietnam with his family during the war, had been especially kind and welcoming to our son, who was adopted from Vietnam. He had made us feel like family.

The funeral Mass was at his home parish, which was about an hour from my home. The pastor from that church, as well as from the parishes that are the base for Vietnamese Catholics in Chicago and from the local Divine Word Missionary community, concelebrated. There must have been almost a dozen of them. Parishioners from his parish and beyond were there too, as well as almost 100 family members, who wore traditional white headbands. The church was packed.

Since the liturgy was in Vietnamese, the only responses I could join in on were "Amen" and "Alleluia." But the eulogy by the youngest son was in English and brought tears to my eyes. I was sad for my friend, for her widowed mother and for her children who had lost a grandpa.

At the end of the funeral, we were invited to the cemetery for the graveside service, to be followed by a luncheon. I assumed it was only for close relatives, but everyone else seemed to be going, so I got the "Funeral" sticker for my car and joined the procession.

At graveside, there were more prayers and songs -- again in Vietnamese. Then the massive floral arrangements, which had been brought from the church, were dismantled, and the flowers distributed to people in the crowd.

The gravediggers were called to lower the casket into the ground. Next, they backed up a nearby crane and lowered a cement slab over the casket. We all waited patiently. Then we all threw our flowers into the casket-sized hole in the ground. While everyone stayed and chatted, visiting nearby graves, Linh's 6-year-old daughter tossed every last flower into her grandfather's grave.

What a powerful and moving example of "burying the dead."

Burying the dead seems like the lonely stepchild of the corporal works of mercy. The others -- feeding the hungry, giving drink to the thirsty, clothing the naked, sheltering the homeless, and visiting the sick and imprisoned -- are embraced by Catholics committed to social justice, with entire ministries and even nonprofit organizations created to try to meet those needs.

But burying the dead? That ministry is usually left to priests, close friends and relatives, and the dedicated parishioners (often retired women) who sing at funerals or serve post-funeral luncheons in church basements.

Catholics of all ages -- especially social-justice-minded ones -- should remember that burying the dead is just as important as feeding the hungry and sheltering the homeless. Being part of a proper burial not only maintains the deceased person's human dignity and is a service to the survivors, it also benefits the church and broader culture by offering ritual and meaning when people need it most.

Although burial of human remains in the ground may have begun as an efficient way to dispose of decomposing bodies, it acquired ritualistic and religious significance early on. For Catholics, burial of the deceased is not only a sign of respect but connected to our belief in the resurrection of the body. Burial is still preferred to cremation, which is now allowed by the church, "unless it has been chosen for reasons which are contrary to Christian teaching" (Canon 1176).

To be clear, I'm not just arguing for comforting the sorrowful -- a related spiritual work of mercy -- although certainly Catholics should consider spending time with widows or widowers, praying for those affected by the death of a family member, or perhaps volunteering at a hospice or hospital.

No, I mean actually attending wakes and funerals, including burial and graveside services. I know funerals are often held during business hours on weekdays, inconvenient for working people, but what could mean more to a family than their faith community accompanying their loved one to a final resting place?

The other six corporal works of mercy are taken directly from Matthew 25 ("Whatsoever you do to the least of my brothers and sisters ..."), the parable of God's judgment. Burying the dead was added to make the list a spiritually significant seven. The admonition to bury the dead comes from the Old Testament Book of Tobit, whose namesake is exiled for his righteous work of burying the dead, especially criminals.

Like Tobit, we should help bury not only our own deceased friends and family members, but others as well. This could include attending funerals of those in our community whom we did not know well in life, or even assisting, financially or practically, organizations that help low-income folks with funeral expenses (which today run in the thousands of dollars).

In our death-avoidant culture, it's understandable that attending funerals is something many prefer to avoid. But I can't think of anything more merciful than helping to ritualize the end of a life. My friend's Vietnamese community has it right.

A version of this story appeared in the June 20-July 3, 2014 print issue under the headline: The ministry of burying the dead.