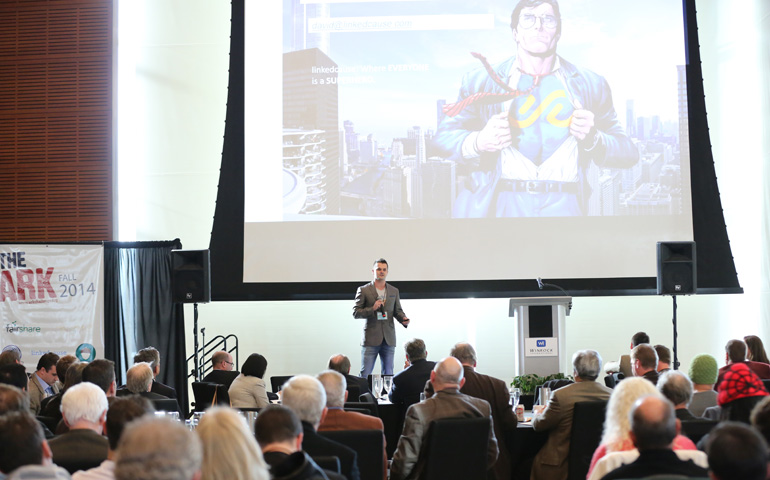 A Minneapolis-St. Paul business called eatiply hopes to go national with its model that lets diners at many restaurants donate 39 cents when they order certain meals -- with half of the money going to a group of hundreds of food pantries across Minnesota and several other states.

The cause-related marketing firm is now taking the next step by designing software that helps organizations form their own such charitable campaigns, which employ what is termed one-for-one donating. For every meal purchased by a customer, a meal is donated to a local food pantry.

The software is a way for restaurants to cater to patrons who like giving to causes, and to allow the businesses to increase sales of high-margin items, as well as their brand image, without discounting, explained eatiply founder David Woodbury. "We've seen a 175 percent increase in sales for those [items] that are profiled."

For charities such as the food pantries and other hunger relief organizations, eatiply's concept simplifies their fundraising and helps with startup resources and ongoing logistics the organizations otherwise might not be able to afford alone. The new software arm of eatiply takes it a step further, as the charitable groups can tailor the concept to their mission, and get support in its promotion.

"If they do it themselves, they make a higher percentage," Woodbury said. "There is no salesperson."

In the original model of the business, which started in Minnesota a couple of years ago, eatiply handles the marketing for a one-time fee. It seems to be working, as first-year revenue for eatiply was about $200,000.

"We have donated 700,000 meals in seven states," Woodbury said. "Customers feel good about it, the businesses profit by it, and it engages customers and increases customer loyalty."

That 39-cent fee when certain meals are ordered is split evenly between food pantries and eatiply itself, as Woodbury says that carrying out such marketing services comes with a cost.

Woodbury got the idea by attending a leadership conference that included Blake Mycoskie, the owner of the shoe company TOMS, as a speaker. TOMS has applied the one-for-one donation idea to footwear.

Eatiply now has hundreds of restaurants involved in the effort and growing. "We'll also have 52 more accounts getting on board in the next two months," Woodbury said.

Eatiply's partner in the home state is Minnesota FoodShare and its 300-plus food pantries, a program of the Greater Minneapolis Council of Churches.

Noya Woodrich, president and CEO of the council, said they are happy thus far with the potential return on their one-time $15,000 investment, and will see straight profit from donations soon, after just over a year.

Many of the benefiting food pantries are in rural towns, where the local Catholic church is one of the centers of the community and many times runs the food pantry. Woodrich said that although most of the dining that's donated occurs in Minneapolis-St. Paul, they are hoping to increase restaurant connections in rural towns, too, so the charity starts at home.

Woodrich said that the food pantries have an added advantage with eatiply since money, rather than in-kind donations, is received and can be used to buy cost-effective grocery items.

Woodbury's venture is attracting attention across the country. Eatiply's parent company, LinkedCause, was one of seven companies that received a $20,000 grant to participate in the Ark Challenge for innovative startups in Arkansas. The challenge, supported by state and private investment, held a three-month "boot camp" that culminated in a Demo Day held at the Clinton Presidential Center in Little Rock Nov. 12.

In Minnesota, eatiply soon will mark an increase in its number of restaurant partners to five times the amount of food pantries served, Woodbury said.

"This will give us saturation across the state," he added.

[Joe Winter is a freelance writer who lives in Hudson, Wis.]