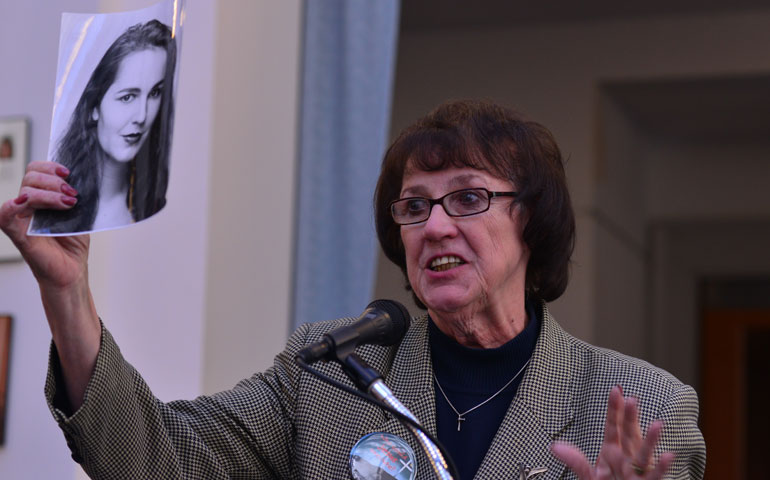 Vicki Schieber, holding a portrait of her daughter, Shannon, discusses her opposition to the death penalty during a Nov. 9 conference hosted by The Catholic University of America and the Columbus School of Law. (Newscom/ZUMA Press/Miguel Juarez Lugo)

On the moral and political issue of the death penalty, U.S. Catholic bishops took their dawdling time in opposing state-sanctioned hanging, gassing, shooting, drugging or electrocuting criminals. When resolutions against exterminating people were finally passed in the mid-1980s, thanks to urgings by Cardinal Joseph Bernardin of Chicago and Bishop Walter Sullivan of Richmond, Va., unanimity was absent. Among the holdouts was Bishop Michael Begley of Charlotte, N.C. Of the 1984 North Carolina execution of Velma Barfield, he said: "She caused some painful deaths. The state has a right to decide on the death penalty and this is one instance when they chose that right."

If bishops were slow-footed in their march to abolition, many in their flocks were not stirring at all. Two years before his death in 1996, Bernardin told James Megivern, author of the 641-page The Death Penalty: An Historical and Theological Survey: "We do not have a large percentage of our people with us, so it is going to require a great deal of work. There's a real challenge here and, if it is really the case that 75 percent to 80 percent of our people do not agree, well then, that means we really have a job ahead of us to explain to them why we take this position."

Few have done more of this hard work as effectively or persistently as Vicki Schieber, whether by writing, lecturing, or testifying before congressional committees, state legislatures or bishops' meetings. When Maryland recently became the latest state to abolish capital punishment, it was Schieber who won the most praise for moving the politicians to action, an effort that took more than a decade of lobbying.

About the same time that she was winning politically, Schieber could point to another success: the publication of a 16-chapter book she edited with Trudy D. Conway and David Matzko McCarthy: Where Justice and Mercy Meet: Catholic Opposition to the Death Penalty. Published by Liturgical Press last year, it is a worthy collection of essays divided into four parts: "The Death Penalty Today," "A Christian Rethinking of the Death Penalty," "Church Teachings on Capital Punishment" and "The Least of These." All but five of the 20 writers are on the faculty at Mount St. Mary's University in Emmitsburg, Md., a school of such progressive bents that it devoted two years to classroom and student assembly discussions and debates on the topic.

The final piece is by Schieber, whose story is a model of the ageless truth that you don't how strong your principles are until they are tested. For Schieber and her husband, Syl, the test came when their 23-year-old daughter, Shannon, was murdered in 1998 when in graduate school in Philadelphia. The Schiebers had to fend off a prosecutor hot to win a capital conviction.

"At the time of Shannon's death," this heroic mother writes, "my husband and I knew little about the criminal justice system, specifically about the death penalty and its arbitrary application related to race, geography, defendant disabilities, conviction of innocents, inadequate legal defense funds, and so forth. ... Shannon's murder also forced us to come to grips with the teachings of our Catholic faith and the lessons learned from numerous years of Catholic education. We were tested in ways no religion course exams ever covered."

Death penalty books, gratefully so, are not rare. Where Justice and Mercy Meet is different. At the end of each of the 16 chapters are "Questions for Discussion." As I imagine it, the intention of Schieber and her co-editors is to arouse parishes to create adult education courses to discuss the church's case against the death penalty. I'd suggest that the pastors of churches in Texas lead the way, that state being the most rabid about killing prisoners -- 507 since 1976, as of Nov. 20, 2013. Then on to congregations in Virginia, in second place with 110. Then Oklahoma with 106 and Florida with 81.

How often have priests or bishops in those states, or any states, taken to their Sunday pulpits to lay out the church's opposition to the death penalty? How often have they turned over the pulpit to any of the country's 140 men wrongly or maliciously convicted of capital murder? How often do they single out for rebuke the thinking of pro-death penalty Catholics like Supreme Court Justice Antonin Scalia?

Those, too, are questions for discussions -- heated or not.

A version of this story appeared in the Feb 14-27, 2014 print issue under the headline: Mother's principles were tested and found true.