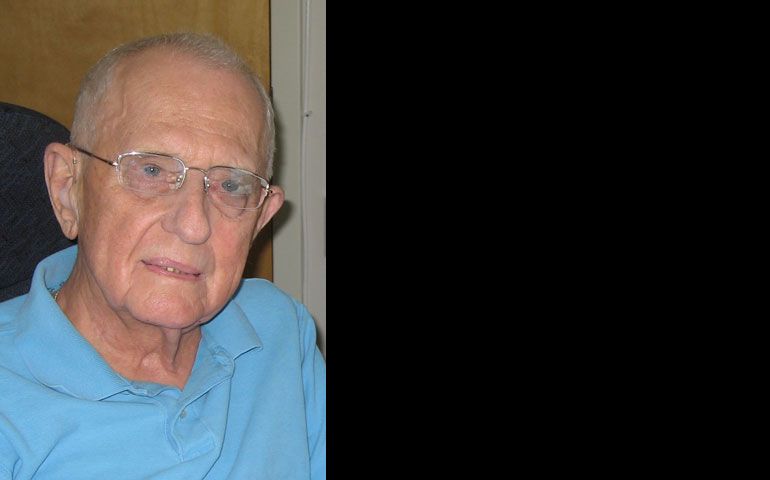 Manchester, N.H. — Msgr. Wilfrid Henry Paradis, an expert adviser at the Second Vatican Council who went on to reshape Catholic religious education in the United States, died June 25. He was 91 and had been a priest for 64 years.

The announcement of his death at Catholic Medical Center in Manchester was made by his niece, Corinne Foreman-Doherty; the funeral Mass was private.

While a young monsignor, Paradis was accredited as an official peritus, or expert, at Vatican II, one of about 460 from around the world. He also served as Manchester Bishop Ernest Primeau's chief aide from 1960 to 1965, working on a preparatory commission for the council and attending all four of its sessions. When the council was meeting in Rome, he lived and worked with prominent figures such as Jesuit Fr. John Courtney Murray, author of the council's groundbreaking text on religious liberty, and Swiss theologian Fr. Hans Küng.

The three were part of a small forum organized by Paradis and others to discuss council proceedings openly. The meeting place was dubbed the "Truth Room," and "No pulling rank" was the motto. "It was as if the bishops had removed their episcopal rings before entering the room," Paradis would later recall. "They really wanted a frank exchange with the international scholars."

Paradis considered Vatican II a highlight of his life, and fully committed himself to its vision of renewal. "I felt extremely grateful to have been alive at the time of the council and to have participated in it," he said.

Subsequently appointed episcopal vicar for renewal in the Manchester diocese, Paradis led the implementation of council reforms throughout New Hampshire. In a fresh approach to church governance, he facilitated the establishment of 125 parish councils across the diocese. The councils were among the first established nationwide. He also sponsored 10 Christian Life Centers, where adult education was a priority. He was a tireless speaker on Vatican II, addressing hundreds of national and local audiences of all denominations. Primeau called Paradis "the veritable herald of renewal among us."

From 1965 to 1968, he coordinated the first diocesan synod in a century. The synod adopted an agenda with a pastoral, not legalistic, approach, aligned with the documents of Vatican II. It aimed to attract and persuade by moving beyond traditional exhortations to "believe, pray, pay and obey" -- a phrase for which Primeau had earlier received worldwide attention during an "intervention," or address to council fathers in Rome.

As the diocesan synod developed, Paradis found serious divisions among the clergy and the laity, between those enthusiastic about reform and those cautious about its direction. He consulted intensively with all groups, including those in opposition to the 10 documents the synod produced. He said none of the 10 was promulgated officially. Primeau felt the Roman Curia would most likely reject them for being insufficiently juridical in tone. The synod's work was allowed to die, with no further action on its proposals.

This difficult episode is covered in Paradis' award-winning history of the diocese, Upon This Granite: Catholicism in New Hampshire 1647-1997. He said that Primeau's resignation in 1974 at the age of 65 -- 10 years before the normal retirement age for bishops -- was the result of disillusionment and exhaustion. Both Primeau and Paradis acknowledged that the attempt at substantial renewal with genuine sharing of decision-making authority had only lasted roughly 10 years. While Paradis recognized increased lay involvement in church administration, he said it was still more in advisory than executive capacities.

In 1973, Paradis joined the U.S. Catholic Conference in Washington as project director for publication of the first national policy guidelines for religious instruction, assisted by Sr. Mariella Frye, a Mission Helper of the Sacred Heart and a catechetics expert. Titled "Sharing the Light of Faith," and widely known as the National Catechetical Directory, the guidelines expanded the traditional focus on student-age populations to include Catholics of all ages and circumstances in life.

The document's purpose was fostering a mature faith capable of addressing the complex needs of contemporary society. Reinforcing the scope of renewal the council recommended, Paradis organized the largest and most in-depth consultation ever undertaken in Catholic religious education in this country. He sought theological perspectives from various scholars and involved constituencies across cultural, ethnic, racial, educational and ecumenical boundaries, including Protestant and Jewish organizations. Some 100,000 recommendations poured in.

The directory was "the centerpiece of catechetical renewal in this country ... and a truly historic contribution to Catholic life," said the late Bishop Thomas Kelly of Louisville, Ky., who was Catholic conference general secretary at its completion in 1977. It was the standard reference for 28 years, with a circulation of more than 300,000 copies.

In 1977, Paradis was appointed secretary of education for the bishops' conference. In that capacity, he was a liaison with the White House, and testified before committees of the Senate and the House of Representatives on educational matters.

The same year, he served as official consultant to the American hierarchy at the Synod of Bishops in Rome. The American bishops' interventions, based on the new catechetical directory, were regarded as among the most influential contributions to the success of that gathering.

In 1981, the Holy See named Paradis to a five-year term on the International Catechetical Council, a consultative body responsible for religious education of Catholics around the world. He is the only New Hampshire priest ever appointed to such a Vatican post.

Paradis was born June 23, 1922, son of the late Wilfrid Zenon Paradis and Alice (Dugre) Paradis of Manchester. He is survived by his younger sister, Marcelle Paradis Lemay of Manchester; niece Foreman-Doherty and her husband, David Doherty; and two grandnieces, Nicole Foreman and Jaime Foreman, all of Pembroke.

After graduating from St. Anselm College with honors in chemistry in 1943, Paradis volunteered for the U.S. Army, serving as a combat medic in France, Germany and Austria. He won the Silver Star -- the Army's third highest military award -- for bravery in combat after he saved the life of his lieutenant while under sniper fire. He was also awarded the Bronze Star, a Combat Medical Badge, a Presidential Unit Meritorious Citation and three battle stars.

On returning home in late 1945, the young veteran abandoned medicine as a career in favor of helping people spiritually. "After seeing the human condition at its most primitive and brutish," he said, "my mind shifted away from science. I was more concerned with the interior, spiritual life than with physical well-being."

[Carolyn Disco writes from Merrimack, N.H., where she is survivor support chairman for New Hampshire Voice of the Faithful.]

Bishop who served Czechs in US, Canada, Australia dies in California

What would Jesus wear to celebrate Mass at the end of the world?