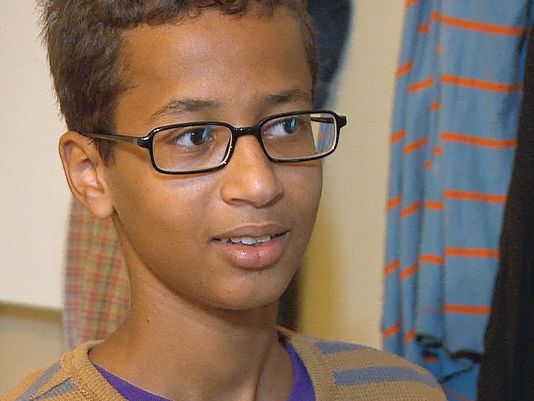 Ahmed Mohamed, 14, was detained after police said a suspicious device was found inside his pencil box at MacArthur High School. (Photo courtesy of USA Today)

A Texas high school student at the center of a tech storm after authorities mistook his clock invention for a bomb got a reprieve from the highest level Wednesday (Sept. 16). President Barack Obama invited him to the White House.

“Cool clock, Ahmed. Want to bring it to the White House?” @POTUS tweeted. “We should inspire more kids like you to like science. It’s what makes America great.”

Officials at MacArthur High School in Irving suspended freshman Ahmed Mohamed, 14, and called police Monday after determining that his invention looked like a bomb. Irving police handcuffed, questioned and detained Ahmed, then let him go.

Police Chief Larry Boyd said Wednesday the wires in a briefcase looked suspicious — and that Ahmed was not immediately “forthcoming” other than to say the device was a clock. He said the incident “evolved as it did as a matter of safety and an abundance of caution” and that no charges will be filed.

Ahmed, who has won awards for his inventions, said he created the clock over the weekend and brought it to school to show an engineering teacher. Ahmed’s case created a storm of support on social media, with #IStandWithAhmed trending on Twitter. Hillary Clinton tweeted support, and technology and engineering giants also chimed in.

“Having the skill and ambition to build something cool should lead to applause, not arrest,” Facebook co-founder Mark Zuckerberg posted on his Facebook page. “The future belongs to people like Ahmed.

“Ahmed, if you ever want to come by Facebook, I’d love to meet you. Keep building.”

The Google Science Fair tweeted that it was “saving a seat” for Ahmed at this weekend’s event. NASA geologist Fred Calef tweeted: “Anytime you wanna see Mars rovers Ahmed, let me know. #IStandWithAhmed.”

The travel website CheapAir.com said it was offering Ahmed a free flight to visit the “NASA center of his choice.”

The White House invited Ahmed to Astronomy Night at the White House next month, an event that connects students with government scientists and NASA astronauts.

“The fact is that America’s best teachers in our schools, in our best schools at least, nurture the intellectual curiosity of all of our students,” White House Press Secretary Josh Earnest said. “In this instance, it’s clear that at least some of Ahmed’s teachers failed him.”

According to Irving police, Ahmed’s case contained a digital clock that the student had taken apart and rearranged. Police said the student had the briefcase in his English class, where he plugged it into an electrical outlet and it started to make noise.

Ahmed said his English teacher confiscated his case. A few hours later, the student said the school’s principal and resource officer pulled him out of class. Police confiscated the case along with Ahmed’s tablet computer.

The Dallas chapter of the Council on American-Islamic Relations said Ahmed was targeted because of his religious and racial identity.

“I think this wouldn’t even be a question if his name wasn’t Ahmed Mohamed,” said Alia Salem, executive director of CAIR’s North Texas chapter. “He is an excited kid who is very bright and wants to share it with his teachers.”

Ahmed said the principal suspended him for three days. The school district declined to discuss details of the case, citing student privacy. But it defended the teacher who voiced concern.

“We always ask our students and staff to immediately report if they observe any suspicious items and/or suspicious behavior,” the district said in a statement, adding: “We will always take necessary precautions to protect our students and keep our school community as safe as possible.”

“Hopefully, we can all learn from this week’s events and the student, who has obvious gifts, will not feel at all discouraged from pursuing his talent in electronics and engineering,” Van Duyne said.