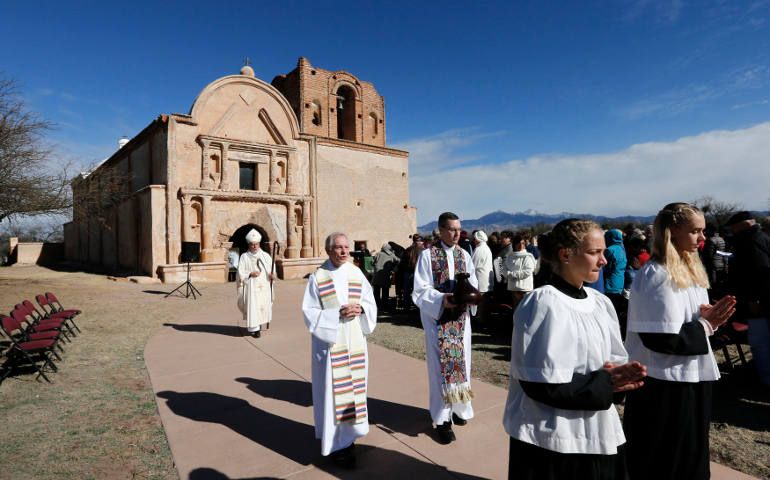 Bishop Gerald Kicanas of Tucson, Ariz., walks with his crosier after celebrating Mass outside the mission at Tumacacori National Historical Park in Tumacacori, Ariz., Jan. 10. The Mass was part of the park's Kino Legacy Day marking the 325th anniversary of the Jesuit missionary's first visit to an O'odham village there. (CNS photo/Nancy Wiechec)

TUMACACORI, Ariz. — Jesuit Fr. Eusebio Francisco Kino, an Italian missionary to the American Southwest known as the "Padre on Horseback," was honored Sunday at the Tumacacori National Historical Park with Kino Legacy Day.

The celebration of the priest -- who founded 24 missions and was also known as an astronomer, builder, mapmaker, linguist, agriculturalist and stockman -- kicked off the yearlong celebration of the National Park Service's 100th anniversary.

But that morning, park rangers left much of the storytelling to Tucson Bishop Gerald F. Kicanas, whose diocese covers the land that Kino crisscrossed, building his missions when he traveled more than 15,000 miles by horseback.

During Mass, held outside the ruins of Mission San Jose de Tumacacori church, the bishop told the crowd what it is to be a great missionary. He compared missionaries such as Kino to archers, ardent with a singular, fixed target.

"They teach Christ, they preach Christ, they lead to Christ," he said. "That was the purpose of Kino's whole life, to lead the native peoples to Christ. To teach them about a God who loved them dearly and who was there among them, always at their side."

The Tumacacori mission church dates to the early 1800s. It had a short-lived tenure as an active church. Apache attacks, upheaval following war with Mexico and one particularly hard winter led to its abandonment by the mid-1800s. The site was named a national monument by President Theodore Roosevelt in 1908, and in 1990 Congress created Tumacacori National Historical Park, which includes the old monument land and the remains of two smaller missions.

Kino was born in 1645 in the northern Italian town of Segno and was educated by Jesuits. As a young man, he fell seriously ill and prayed for God's grace and healing, calling on the Jesuit missionary St. Francis Xavier as intercessor. When he got well, he joined the Jesuits.

He yearned to do missionary work in China, but was sent to Mexico instead. He worked in Baja, California for three years and spent the rest of his life in Pimeria Alta, what is now the northern part of Mexico's Sonora state and southern Arizona.

He first arrived in Tumacacori (pronounced Too muh ka' koh ree) in January 1691, responding to an invitation of its O'odham people. Shortly after, there were four Kino missions in O'odham communities. Today, San Xavier del Bac remains the only active Kino mission in Arizona. Located just south of Tucson, the northernmost point of the Sonoran mission trail, it is a popular destination for pilgrims and tourists.

Tumacacori, about 20 miles from the border city of Nogales, Ariz., covers 360 acres and is among the smallest of the 23 national parks within Arizona.

During the Kino Legacy Day, the park service set up displays of heritage horses, livestock and other items associated with the missionary priest who brought cattle, other livestock, European farming tools and seeds to the area so the missions would be self-sufficient.

"We're honored to be a part of that, to feed America a little bit and to be able to work and be a part of God's land," he said.

Mark O'Hare of the Kino Heritage Society handed out Kino wheat to Tumacacori visitors. The grains came from a line of winter wheat the Jesuit brought to the missions.

O'Hare, a Tucson native and admirer of Kino since boyhood, runs the society's website, padrekino.com. He said the group was formed in 2010 to make Kino's life and legacy more known to the public and to assist the Diocese of Tucson in promoting his cause for canonization.

"Spiritually, he was this man of great faith," O'Hare told Catholic News Service. "He was what we'd call a white martyr, not someone who died for the faith, but someone who dedicated his life for the salvation of souls."

The Vatican received the diocesan petition and documentation on Kino's life and work in 2006, but has yet to act to name him venerable, the next step in the sainthood process.

Tucson resident Rosie Garcia, president of the Kino Heritage Society, said moving his cause along would a blessing for area. She marks her admiration for the missionary with the vanity Arizona license plate that reads KINOLND.

"He was a man of peace and that is what we need right now -- peace in these border areas where there is so much turmoil," she said.

Once forbidden, outdoor Catholic weddings could be pandemic trend