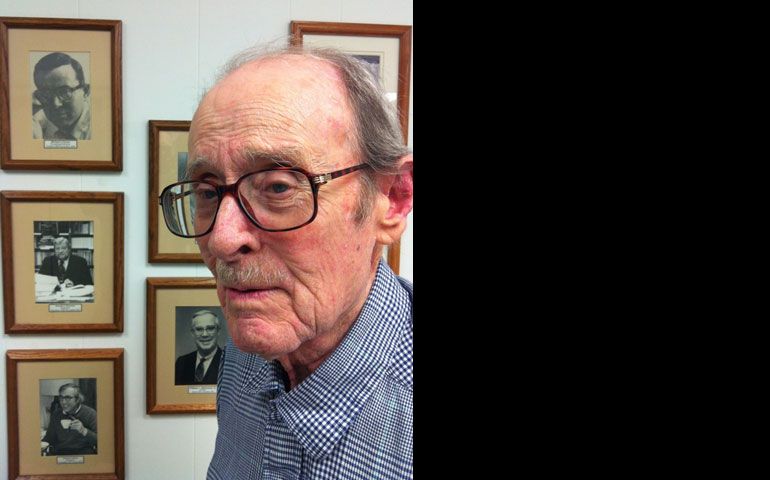 Michael Greene stands before photos of NCR’s eight publishers at the company’s Kansas City, Mo., offices during a 2012 visit. His photo is at top left. (NCR photo/Thomas C. Fox)

Kansas City, Mo. — A memorial service will be held here Jan. 26 for Michael Greene, the founding publisher of the National Catholic Reporter.

Greene, a husband, father and U.S. Army veteran who turned to philanthropy and social justice advocacy after leaving NCR, died Dec. 30 while receiving care from the Veterans Administration Medical Center in Kansas City. He was 84.

Part of a team of people -- with editor Robert Hoyt and Kansas City, Mo., diocesan priest Fr. Vincent Lovett, among others -- who founded the paper, Greene served as publisher from its first issue, dated Oct. 28, 1964, until November 1965.

Upon his departure, Greene was replaced by Donald Thorman, who served in the role until his death from a heart attack in November 1977.

Speaking during a talk at NCR's offices last fall, Greene said the idea to create NCR came after he, Hoyt and Lovett had worked together to found the Catholic Reporter, a Kansas City diocesan newspaper, in 1959.

"I was satisfied to have a paper that prided itself on very limited resources to attempt to do some reporting, and that's why we called it the Reporter," Greene said. "And after doing that for about a year, I realized that nobody else in the world of Catholic publications was attempting to do that on a national basis. I thought, 'Why can't we try that?' "

After hosting a 1964 dinner that raised some $1,600 for the new paper, Greene said, he and the others decided to move forward with the venture, publishing the national paper concurrently with the diocesan edition.

With the Second Vatican Council under way in Rome by 1962, Pope John XXIII "was our very best circulation promotion guy," Greene said, with news of the council's events helping to propel the new national paper to an average of 1,000 new subscribers per week in the first year.

A native of Wheeling, W.V., Greene graduated from the University of Notre Dame in Indiana with a degree in philosophy of literature and was named the institution's "man of the year" in 1963, accepting the award at a ceremony hosted by its longtime president, Holy Cross Fr. Theodore Hesburgh.

Before moving to Kansas City in 1959 with his wife and family, Greene had worked for a number of other news organizations. Drafted into the U.S. Army during the Korean War, he first served as a correspondent for Stars and Stripes, the daily newspaper of the U.S. Armed Forces.

Following discharge from the Army as a sergeant, Greene then worked for The Record, the newspaper of the Louisville, Ky., archdiocese, and The Review, Baltimore's Catholic newspaper (now the Catholic Review), before moving to Kansas City.

After departing NCR in 1965, Greene went on to serve as the vice president for institutional advancement for the Kansas City Art Institute, an independent college of art and design. While there, he helped launch the city's annual Renaissance Festival as a benefit for the institute.

Ron Cattelino, the art institute's executive vice president for administration who worked with Greene when Cattelino was first hired in the 1970s, described Greene as "the kind of person that you would want out in the community."

Biz Greene, Michael Greene's wife, said in an interview that both she and her late husband considered their role creating NCR as "central to our mission in life."

Recalling how she registered the first subscribers to the paper by hand along with a number of volunteers who were helping keep pace with the rocketing number of subscribers, Biz Greene said "I truly remember feeling at the time that this is our mission in life."

Michael Greene credited a number of connections he made while attending Notre Dame to eventually leading him to journalism.

While taking part in a prayer group during graduate studies at the university, Greene said during his fall talk, he met Holy Cross Fr. Louie Putz, a German immigrant who headed up Fides Publishers, a now-closed Catholic publishing house based at Notre Dame.

Fides, Greene said, hired him to translate a French manuscript into English, which led him to identify himself as a writer when filling out his U.S. Army forms, which led to the job with Stars and Stripes.

Larry Guillot, a former Kansas City area priest who wrote for both the national and diocesan editions of the Reporter while attending the Second Vatican Council and who would later work with Greene at the art institute, said the ex-publisher was "very proud" of his work with NCR, but "didn't carry it around on his sleeve."

"I don't think he used that as a way of saying, 'This is some great accomplishment I did,' " Guillott said. "I think he would probably have seen it as a piece of his work over the years."

Following his work at the art institute, Greene served as the executive director of Cross-lines Cooperative, a Kansas City, Kan., nonprofit organization that provides emergency relief and assistance to those affected by poverty. He retired with his wife to Pagosa Springs, Colo., in 1999 before returning to the Kansas City area for medical treatment in 2008.

Along with Biz, Greene is survived by son Denis, daughters Monica, Brigid and Kate, and eight grandchildren.

The Jan. 26 memorial service will be held at Kansas City's Unity Temple on the Plaza.

Your thoughts on Jamie Manson's columns, voting with a conscience, religious liberty and more