NCR readers may not see eye to eye, but they speak heart to heart 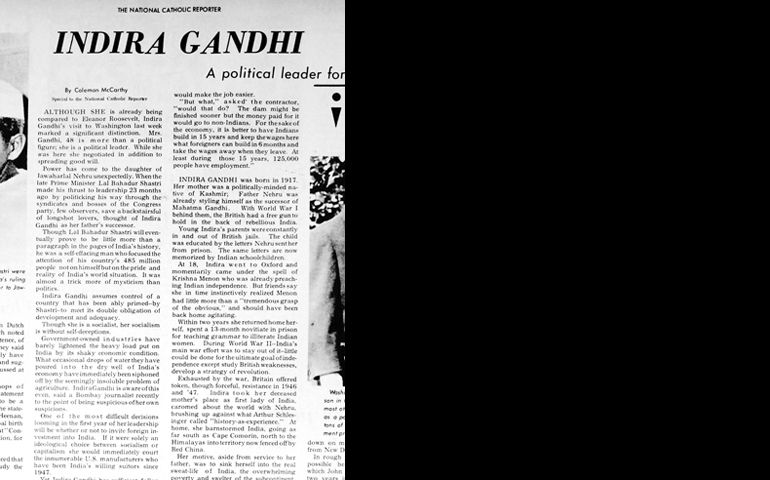 About the same time the National Catholic Reporter emerged 50 years ago, so also in 1964 did the Free Speech Movement in Berkeley, Calif. At its core, the upstart NCR was itself an effort at free speech -- against the controlled speech found in the pages of diocesan newspapers overseen by local prelates and assorted ecclesiastics who had little understanding, much less regard, for independent journalism.

The free speech that I've most cherished in the pages of NCR these past decades has been the letters to the editor. Who are the writers? They range from lovers of truth, haters of guff, correctors of errors, blowers of smoke, deliverers of manna to pickers of nits, spreaders of peace, and a bench of prose stylists. These people create a forum for diversity that can't fail to energize readers to take their antiphonal turn. The letters are expressions of loyalty, the writers seeing themselves as valued members of a team where if we don't always see eye to eye we can always speak heart to heart.

Now and again, someone quits the team by writing a cancel-my-subscription letter and damning NCR as pond scum, with me in the subaquatic waters below.

Though I've lost count of the letters wishing I sink farther into the dank bottom, there has been a pattern: my columns that took a less than fawning view of an icon.

"It gets tiresome responding to Colman McCarthy's attack on good people," wrote a reader on Nov. 18, 2005. "The latest is Jimmy Carter." Weeks earlier, on Oct. 7, 2005, this: "I'm getting awfully tired of Colman McCarthy and his self-righteous diatribes. In fact, I rarely read him anymore because I find him boring and predictable. His latest one, trashing Cindy Sheehan, was disgusting and I'm surprised you printed it. … Colman McCarthy impresses me as a middle-aged, embittered man who never quite made the mark he hoped to in the public arena and is envious of others who do."

"What in the world is Colman McCarthy thinking?" asked a reader Nov. 7, 2003, when I suggested that the halo above the Dalai Lama's handsome head was not all gold. "I find it unacceptable that the editors of NCR would allow this article to be printed without calling into question Mr. McCarthy's ignorance."

A similar thought on Jan. 13, 2006, also raised questions about NCR's judgment, as if you shouldn't blame a pig for grunting but scold the farmer for calling it music: "Colman McCarthy's column, 'Ten clichés to make a hunter happy,' was obviously printed by you in error. I'm sure Mr. McCarthy meant to send the column to PETA, not NCR. What a piece of drivel! I'm not a hunter, but I found this article to be a complete waste of ink in your paper."

Another, on Jan. 27, 2006, took dead aim on the same piece: "In the past I have read letters to NCR excoriating Colman McCarthy for what a reader has deemed his (pick one) erroneous, stupid, misguided, subversive view on some subject. I felt a little sorry for Mr. McCarthy. No longer! In the Dec. 16 edition, Mr. McCarthy launched into a diatribe against game hunting, a subject on which he demonstrated complete ignorance."

Not to be masochistic but one more, if I may, March 18, 2005: "I suppose it is somewhat admirable that NCR continues to give Colman McCarthy space to voice his 'I have seen the light about the futility of organized religion, especially Catholicism' views. Even lost souls deserve a hearing. But I found his article criticizing Jim Wallis to be a bit much."

Please pardon while I disagree with the last letter. It isn't "somewhat admirable," it's totally admirable that I've enjoyed the kindness of NCR's editors. I've been privileged to write for the paper for 48 of its 50 years, starting in 1966 when traipsing the land as a freelancer hoping to hire on somewhere. NCR had no staff openings, but Bob Hoyt, the paper's founding editor, published most of what I sent in. Getting in print gave me enough of a tailwind to uplift me eastward, and soon enough to The Washington Post for a run of nearly three decades.

NCR has deservedly won a bounty of prizes, but the grandest of all is when readers see a story and think: If NCR hadn't published it, I wouldn't have known about it. Every issue for 50 years has been a prizewinner.

Column | NCR readers may not see eye to eye, but they speak heart to heart