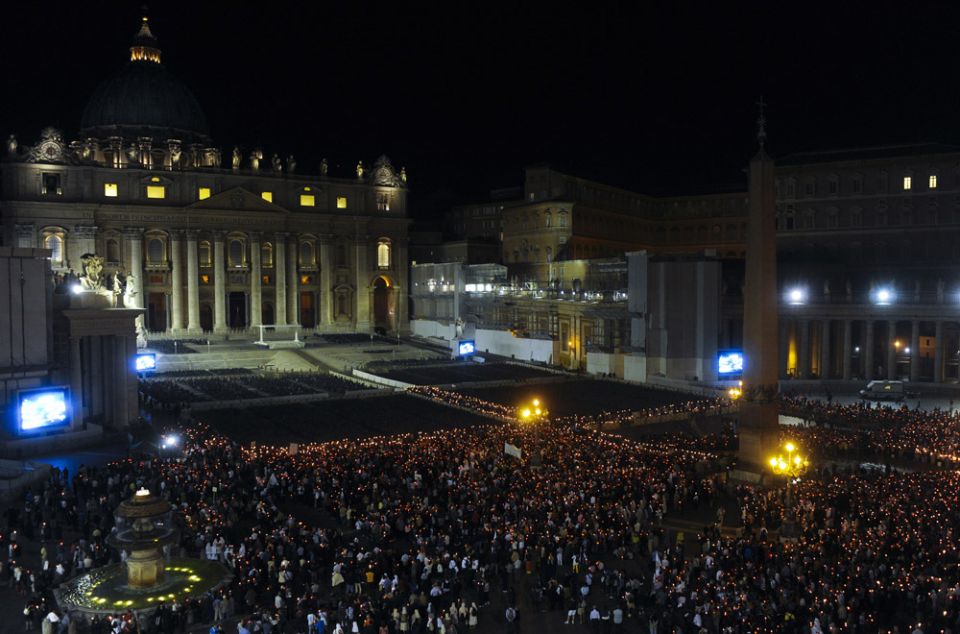 People hold candles in the form of a cross during a vigil in St. Peter's Square at the Vatican Oct. 11, 2012, to mark the 50th anniversary of the opening of the Second Vatican Council. (CNS/Giancarlo Giuliani, Catholic Press Photo)

Archbishop William Lori of Baltimore has taken unilateral action to address the sex abuse crisis in the Catholic Church. He should be commended for doing so. While his efforts are unlikely to resolve many of the problems associated with the crisis, it is at least a decision to act rather than waiting for permission.

However, the church is faced with a crisis that goes even beyond the sex abuse atrocities. There is a fracturing within the church of historic dimensions. Pope Francis himself has lost credibility, as members of the hierarchy feel emboldened to criticize him directly. They not only question his actions on the crisis but go after his leadership and commitment to what they see as unchangeable doctrines.

Bishops have accused the pope of lacking clarity in his statements on homosexuality and divorce. According to the Times, less than half of U.S. bishops attended the January retreat which Francis had encouraged the bishops to hold back in September.

Should the bishops act on their own? How does Francis and the church reestablish unity — or can they? Certainly, prayer to the Holy Spirit for guidance is in order, but what can be done?

I agree with Pope Francis when he says that credibility "cannot be regained by issuing stern decrees or by simply creating new committees . . . as if we were in charge of a department of human resources."

Too often the church has attempted to acknowledge the problem and feel that somehow solves the problem. It doesn't. Many pastors felt the need to apologize and express remorse after the Pennsylvania grand jury report accusing more than 300 priests of sexual abuse surfaced. That's fine. But there is somehow the notion that if I apologize from the pulpit for one or two weeks, the problem has been excised. Everything can return to normal. It can't.

The institutional church has been forced to acknowledge that there have been a lot of bad priests who have done bad things. The church even acknowledges that many bishops foolishly covered up the actions of these priests.

What does the church seem unable to acknowledge? There is something wrong with our church. Significant change needs to occur.

Instead, we face a fierce battle between a traditionalist hierarchy and so-called progressives in the church. Even though Pope Francis seems committed to some incremental change, the dominant conservative message coming from the hierarchy is that nothing can change in this mausoleum of a church. Such rigidity and refusal to understand the challenges the church faces in the 21st century does not suggest this church is capable of successfully dealing with any crisis it may face.

What needs to change in our church? Do we need married priests? Of course. Do we need female priests? There is no question about it. Do we need to rethink some of our moral proscriptions in light of today's culture? Certainly. Do we need to rethink a policy requiring Catholics to submit to confession to a priest for the forgiveness of sins? What do you think? Do we need to loosen liturgical norms which prevent pastors from leading their own congregations as appropriate? I would think so.

I could go on and on, but we continue to be faced with the power of those who only know one word – no. Does the hierarchy need to understand that they no longer have a right to the authority they claim and need to change their relationship with the faithful? Absolutely. That has to change.

This time around a church council needs to include women, laity, sexual abuse survivors and members of other significant groups as voting members. There needs to be a major period of preparation that should begin now. The entire event may take as many as ten years, but creating a new church will of necessity require a large block of time.

Only when the church realizes the need for a major overhaul will it be able to address its complete failure and shame over the major scandal and cover-up it has participated in.

The alternative is an inability to retain the respect and allegiance of its members. A remnant of those who retain blind adherence to the church will remain. Many others will walk away from a church that doesn't even understand the full import of its cataclysmic failure to be the light of Christ to the world.

Methodists postpone debate of gay issues that could split denomination

Chicago priest removed from ministry during review of abuse allegations