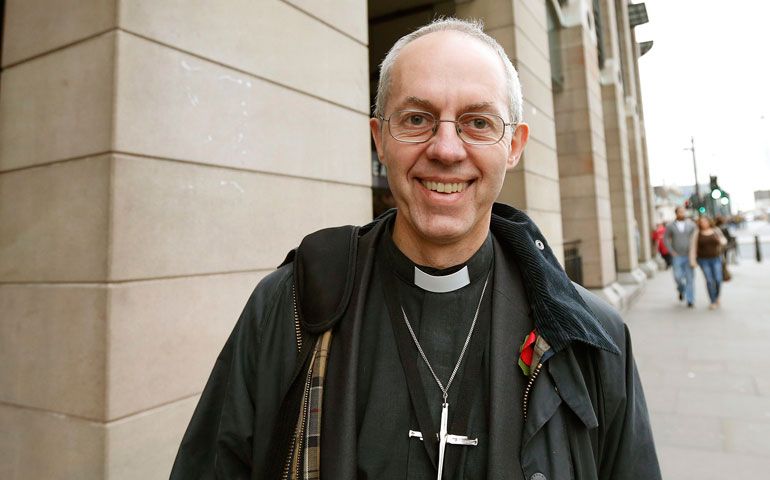 Canterbury England — Bishop Justin Welby, a former oil executive who's emerged as a critic of corporate excess, was named Nov. 9 as the 105th archbishop of Canterbury, primate of the Church of England and leader of the worldwide 77 million-member Anglican Communion.

A statement from British Prime Minister David Cameron confirmed the appointment after two days of speculation. Welby, 56, succeeds Archbishop Rowan Williams, who will return to academia at Cambridge University next year.

Speaking at a news conference on Nov. 9, Welby said he is "utterly optimistic" about the future of the Church of England.

He said that the question of gay marriage in his new global flock was a complicated issue "and not one to be handled today, off the cuff."

But he offered a definite olive branch to the gay community despite reaffirming his opposition to same-sex marriage. Welby pledged to re-examine his own thinking on homosexuality while speaking out against exclusion and homophobia.

"I know I need to listen very attentively to the LGBT communities and examine my own thinking prayerfully and carefully," he said.

In the United States, where the Episcopal church is the official American branch of Anglicanism, Presiding Bishop Katharine Jefferts Schori signaled that she's ready to work with Welby, acknowledging that "his gifts of reconciliation and discernment will be abundantly tested."

Episcopalians' progressive policies on homosexuality have strained ties with Canterbury in the last 10 years, particularly after the approval of gay bishops and same-sex marriages led to a small schism in the U.S. church.

Welby's appointment follows weeks of wrangling by members of the Crown Nominations Commission -- a panel of four women and 15 men -- and a split over whether to choose a "liberal" reformer or a "safe pair of hands" to maintain the status quo in a church that's divided at home and abroad on matters of gender and sexuality.

Welby's background in business and finance and his opposition to same-sex marriage makes him popular not only with conservatives within the Church of England but also with the evangelical Anglican provinces of Africa and Asia. His work as a peace negotiator on Williams' behalf has won him the respect of Muslim and Jewish leaders.

Welby, the current bishop of Durham, comes out of the fastest-growing wing of the Church of England, the evangelical movement that has helped to shape Christianity in Britain and other parts of the world with the popular Alpha Bible study course.

Welby's appointment is expected to seal a vote in favor of allowing women bishops at a special meeting of the Church of England's General Synod held in London later this month.

The first female bishop could be chosen as soon as spring 2014.

Welby is seen as more conservative than Williams, who famously said when he announced his retirement last March that his successor would need "the constitution of an ox and the skin of a rhinoceros."

Welby's meteoric rise from his ordination as a priest just 20 years ago to archbishop of Canterbury surprised many in the Church of England.

Welby studied law and history at Cambridge and went on to work in the oil industry for 11 years, where a reported six-figure salary seemed to cement his future as a top British businessman. But a personal tragedy in 1983 changed that.

That year, his 7-month-old daughter, Johanna, was killed in a car crash in France. "It was," he said in an interview, "a very dark time for Caroline and myself but in a strange way it also brought us closer to God."

In 1987, he resigned from the oil industry after deciding to pursue a call to the priesthood.

Although some Anglicans say his business background will help him confront the Church of England's pension crisis and a dwindling number of clergy, he has also emerged as a strong critic of the various excesses of capitalism.

Only last month, he suggested that before the present economic crisis banks had served "no socially usefully purpose" and were "exponents of anarchy." He called on the financial industry to be "rebuilt from the ruins."

In an interview with the U.S. magazine The Living Church earlier this year, Welby said that the pay of many of Britain's top executives was "outrageous and even obscene … We need to get to the point where there is a general recognition that being paid vast multiples of other people's pay is not acceptable in a society that wishes to be happy and stable."

'God loves you,' archbishop tells death-row inmates as he confirms them

Three weddings and a priest

Breastfeeding in church? Why, naturally