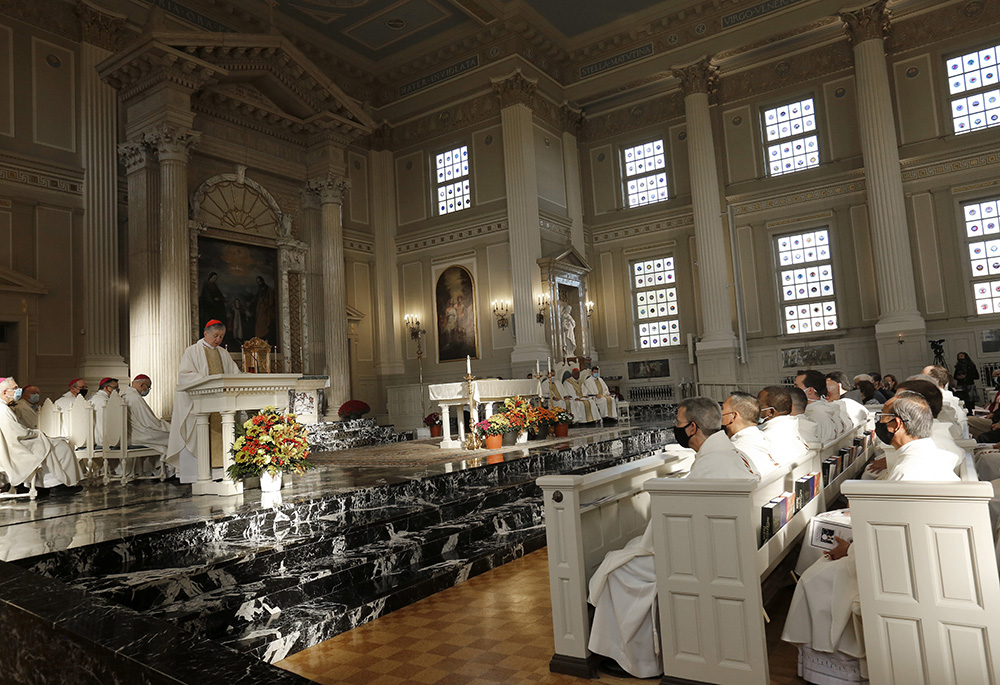 Cardinal Blase Cupich of Chicago reads a letter from Pope Francis at the beginning of Mass in the Chapel of the Immaculate Conception at Mundelein Seminary Oct. 17. Cupich promulgated a new archdiocesan policy Dec. 27 requiring all Chicago clergy to obtain the archbishop's permission to celebrate the Tridentine Mass. (CNS/Chicago Catholic/Karen Callaway)

Beginning Jan. 25, 2022, all clergy in the Chicago Archdiocese will need the archbishop's permission to celebrate the Tridentine Mass, according to a new archdiocesan policy that Cardinal Blase Cupich promulgated on Dec. 27.

The five-page policy spells out the archdiocese's plan for implementing Traditionis Custodes, the apostolic letter that Pope Francis issued July 16 that curtails use of the pre-Vatican II liturgy, instructing priests and deacons that their written requests to offer the pre-conciliar Latin Mass must include average attendance at those liturgies and that priests are obligated to celebrate Mass in the reformed rite on major solemnities like Christmas and Easter.

"My intention in sharing this policy is to encourage you to reflect on the duty we each must assist our people in this moment of Eucharistic revival by rediscovering the value of the liturgical reform in the rites given to us by the Second Vatican Council," Cupich wrote in an accompanying letter to priests.

The cardinal released his policy a little more than a week after Francis approved further clarifications regarding restrictions on the Latin Mass. Those clarifications, released Dec. 18 by the Vatican's Congregation for Divine Worship and the Discipline of the Sacraments, prohibit priestly ordinations and confirmations in the old rite and limit the frequency in which priests authorized to celebrate the pre-Vatican II Mass can do so.

Cupich wrote that after Francis issued Traditionis Custodes, the cardinal consulted with liturgists, priests and leaders of religious communities who have experience ministering to Catholics who regularly attend Mass in the old rite.

Cupich wrote in his letter to priests that he hoped issuing the archdiocesan policy would be "an occasion to renew your understanding of the foundations of liturgical renewal and to share that with your communities."

After Jan. 25, any priest, deacon and ordained minister in the Chicago Archdiocese wishing to celebrate the old rite will not only need to make an official request in writing, but their requests must include "a statement of agreement" that they will abide by the norms set in the archdiocese's policy.

If the archdiocese grants permission to celebrate the Latin Mass, it will also be with the understanding that the priests authorized to offer that liturgy and provide pastoral care to traditionalist communities will do so as delegates of the archbishop.

Using regular parish churches for Mass in the old rite will only be allowed if it is impossible to use another church, oratory or chapel. Using a parish church for the Latin Mass also requires the Vatican's Congregation for Divine Worship and the Discipline of the Sacraments to grant that favor at the archbishop's request.

If the traditional Latin Mass is authorized, the Scripture readings will need to be proclaimed in the vernacular, using the official translation of the U.S. Conference of Catholic Bishops. The homilies are also to reflect the norms and directions for preaching indicated by the Second Vatican Council and post-conciliar documents.

Priests authorized to offer the Latin Mass will be bound to celebrate Mass in the reformed rite on the first Sunday of every month. And in the Chicago Archdiocese, only the post-conciliar liturgy can be celebrated on Christmas, the triduum, Easter Sunday and Pentecost Sunday.

"The guiding principles for receiving and implementing this Motu Proprio must be the unity of the Church and the recognition that the Second Vatican Council and its reforms are not only an authentic action of the Holy Spirit but also are in continuity with the Tradition of the Church," the policy states.

That recognition, the policy adds, entails the "full acceptance" that the liturgical reforms promulgated by Popes Paul VI and John Paul II "are the unique expression of the lex orandi of the Roman Rite," in conformity with the decrees of the Second Vatican Council.

Signaling Vatican II's call for a reformed liturgy, Cupich signed his archdiocese's policy on Dec. 25, the 60th anniversary of Humanae Salutis¸ the apostolic constitution by which Pope John XXIII convoked the council.

In his letter to priests, Cupich said he had also asked the archdiocesan Office of Divine Worship to develop materials and opportunities "for the liturgical catechesis and formation" of the lay faithful "so all can come to a better understanding and deeper acceptance of the restored and renewed liturgy that is part of the precious heritage of the Second Vatican Council."

"The challenge before us as pastors, then, is to assist these brothers and sisters in coming to an appreciation that the reformed liturgy continues to embody the spiritual depth of the earlier liturgy and that it has been enhanced by the restoration of elements in the tradition which had become underemphasized," Cupich wrote.