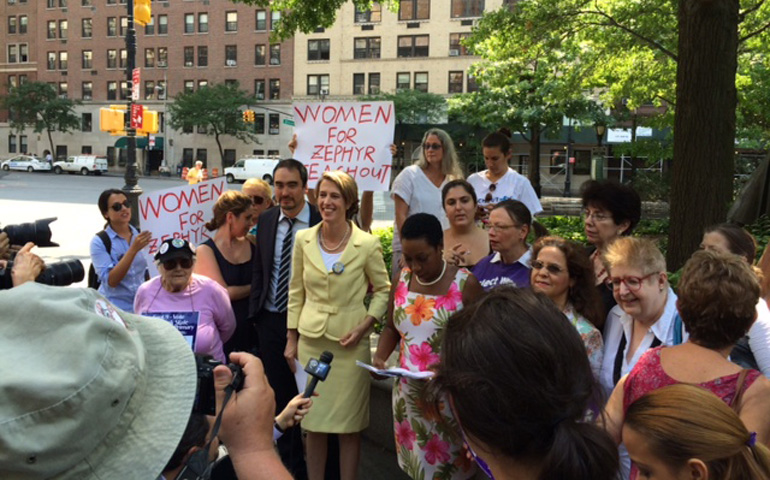 Zephyr Teachout, in yellow, accepts the endorsement of the National Organization for Women on Aug. 26 at Riverside Park in Manhattan, N.Y. (Ben Feuerherd)

In March 2001, it took just a phone call for the North Carolina Supreme Court to end a man's life.

Willie Fisher, a convicted murderer, sat on death row while a team of lawyers argued for a stay in execution. Claiming a conflict of interest, Fisher's lawyers successfully lobbied a Superior Court judge to postpone the execution.

But in a phone call, the state's Supreme Court decided to lift the stay, and Fisher was executed the following day.

It was a disheartening experience for Zephyr Teachout, at the time a law clerk fresh out of Duke University School of Law who worked with Fisher's defense lawyers.

"It was such a horrifying moment for my belief in law," Teachout said in a recent interview with NCR. "It was certainly a moment where I saw how law can be bent and used differently."

Today, Teachout is in another long-shot fight: a Democratic primary slated for Tuesday with the well-financed, well-recognized incumbent New York governor, Andrew Cuomo.

Teachout, now an adjunct law professor at Fordham University, has been on the stump this summer, touting her progressive politics and promising to end corruption in Albany if elected. In short, Teachout's campaign promise is to stand up for those who don't have a voice in politics. And many of her pertinent policy positions -- police procedural reform, law reform, and clemency -- are influenced by her previous experience in the criminal justice system.

According to Teachout, there are basic policy changes that can be made to curb the number of young New Yorkers who enter the criminal justice system.

Regarding police reform, Teachout publicly opposes both the stop-and-frisk tactic and the "broken windows" approach to policing. She also argues there's often a disproportionate response to small crimes, which leads to needless arrests.

"An example would be performers in the subway. Ideally, in the first encounter, the officer would say, 'That's against the law, don't do that' instead of an arrest," Teachout said.

"No one should casually sentence someone to five years in jail," she said. "Every politician should go and spend time and visit prisons and jails. Because if you are choosing to exercise this kind of power over another person's life, there's a role for that, but you have to know the kind of power you are exercising."

"At a policy level, we can support protecting and serving as opposed to militarization or disproportionate response," she said. "Step one is making sure we don't militarize and actually call for a review of military equipment in New York police forces."

Warming to her theme of standing for the outsider, Teachout supports legalization as a way to restore "dignity" in the political system.

Aside from these systemic and policy reforms, for Teachout, there's a human element missing in Cuomo's administration. A governor has the duty to be compassionate, she argues. And granting clemency is part of that.

"Andrew Cuomo does not grant clemency," Teachout said. "I think he has granted three clemencies total in the last four years. Extraordinary. There are more than three people in New York prisons deserving a clemency."

She then summed up her attitude toward Cuomo's reluctance: "Refusing to grant clemency is a failure of one of the most basic jobs of being governor."