Bishop Okpaleke [Middle] flanked by two other bishops who attended the event c.jpg 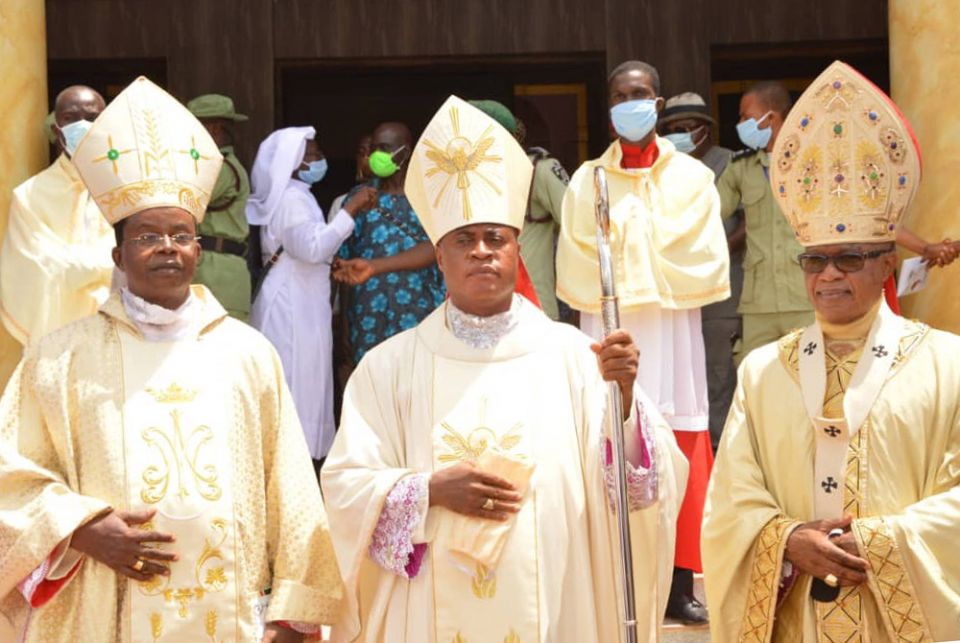 Bishop Peter Ebere Okpaleke, center, poses with two fellow bishops, at his installation as bishop of the Ekwulobia Diocese April 29. At Okpaleke's left is Archbishop Valerian Maduka Okeke of Onitsha, and also the papal delegate at the installation; to his right is Bishop Paulinus Chukwuemeka Ezeokafor of the Awka Diocese. (Martin Anusi)

Anambra, Nigeria — Bishop Peter Ebere Okpaleke was installed April 29 as the bishop of the new Ekwulobia Diocese, after having been rejected in the Ahiara Diocese by priests and parishioners in a prolonged crisis that engulfed the Catholic Church in the region for about eight years.

"It's one of the greatest news of the decade in this part of the church in Nigeria because the creation of the new diocese has long been overdue," Fr. Martin Anusi, the director of communications at the Awka Diocese, told NCR. "People have dreamt and made appeals for a new diocese over the years."

On March 5, Pope Francis announced the creation of the Catholic Diocese of Ekwulobia — a new diocese in Southeast Nigeria formed from part of the territory of the Awka Diocese that will be a suffragan see of the metropolitan see of Onitsha.

Ekwulobia is an Igbo-speaking, Catholic-dominated town in the Southeast region with a population estimate of about 40,000-50,000 people who are predominantly farmers and artisans. Since 2008, the Catholic Diocese of Awka had been writing letters and making passionate appeals to the Vatican for the creation of a new diocese for the growing Catholic population. Outstations and new parishes were springing up in communities around the diocese.

In 2012, then-Pope Benedict XVI appointed Okpaleke as bishop of Ahiara Diocese but he was rejected and never allowed to enter the diocese by protesting priests and parishioners. Protests were organized and petitions written to the Vatican in rejection of the new bishop. The protestors argued that Okpaleke is not from their own linguistic and cultural group and described his appointment as discrimination and "ecclesiastical colonization."

In 2017, with the crisis unresolved, Pope Francis gave priests of the diocese 30 days to personally write to the Vatican apologizing and pledging obedience to the pope and accepting Okpaleke or be suspended from the Catholic Church. While the priests wrote the letter, they still rejected Okpaleke and insisted that a local priest among them be made a bishop of the diocese.

As a result of the crisis, Okpaleke was never installed as bishop after he was ordained in May 2013. On Feb. 14, 2018, Okpaleke resigned as bishop of the diocese and moved to the Awka Diocese, his native home. Pope Francis announced he had accepted his resignation on Feb. 19 and appointed Bishop Lucius Ugorji of the Umuahia Diocese as apostolic administrator.

The crisis, the first of such development in modern Catholic history in the country, shocked the Catholic community and hierarchy in Nigeria and around the world.

Guests and parishioners inside the church during the inauguration c.jpg 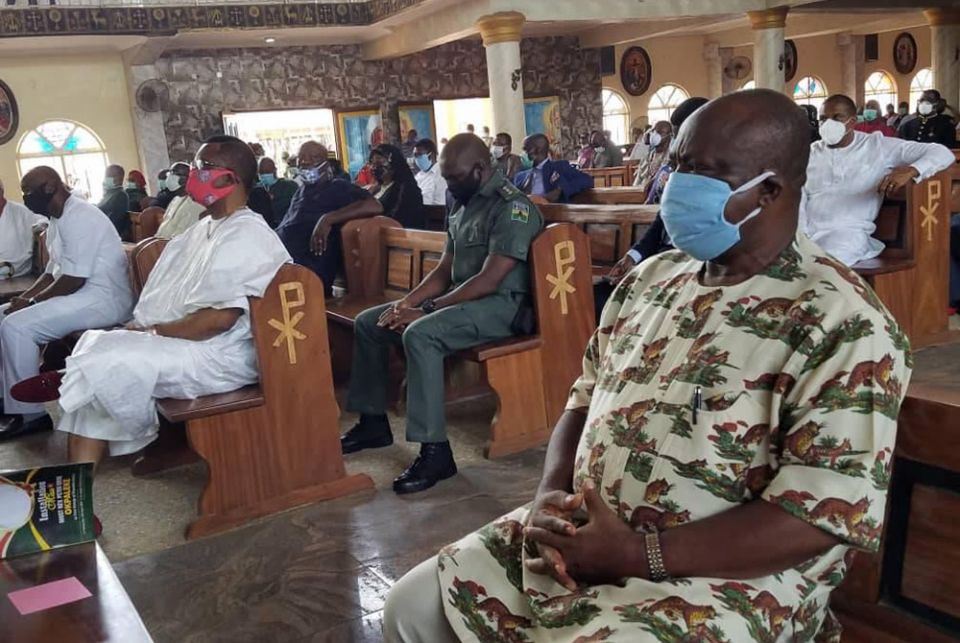 "It's a very complex situation," Anusi said. "The appointment of bishops is well-known all over the world. The pope has the canonical right to change and appoint bishops from any anywhere and send him anywhere he wishes. A bishop could be appointed from anywhere and sent to somewhere else. That has been the practice."

Okpaleke is not the only bishop in the country to be appointed to a diocese outside his own or in a region with different cultural and linguistic backgrounds. Other bishops including the current president of the Catholic Bishops Conference of Nigeria, or CBCN, Augustine Obiora Akubueze of Benin City, who is from the southeast region and is an archbishop outside his region with different language and cultural identity.

"I know about five bishops in Nigeria who are heading dioceses that are outside their regions or ethnic groups. So, I think the question of why they rejected him should be answered by them; that is why the entire church and people were surprised and asked questions at that time. When I spoke with him [Okpaleke] recently about the crisis, he said he was surprised too with the crisis and behavior of the priests and parishioners at the diocese," Anusi said.

Anusi said priests from other regions and observers who were monitoring the developments felt some groups were sponsoring the crisis in the diocese because Okpaleke was heading an Igbo diocese, his ethnic group. Ahiara is in Mbaise, a predominantly Catholic community in Imo state, Southeast Nigeria. Okpaleke is from Anambra state, which shares a border with Imo to the south.

"What made some of us to begin to see some foul play was that initially, the people were happy and celebrating with his [Okpaleke] coming in their diocese until suddenly everything changed. It seems like there is a hand somewhere causing the whole trouble but it's not really in my place to say that or who it was," said Anusi.

Anusi told NCR that Okpaleke said he doesn't want to be an obstacle to faith of Catholics in that region. "People held him in high regard for resigning because that was the example of Jesus Christ. People praised him for his humility and maturity," said Anusi.

In February 2018, after the resignation of Okpaleka, a reconciliation mass and prayer was held at Mater Ecclesiae Cathedral of the embattled diocese. All the priests in the diocese were asked to embark on a personal retreat of reconciliation with a resolution to forget the past and move ahead.

Parishioners during a mass at the inauguration c.jpg 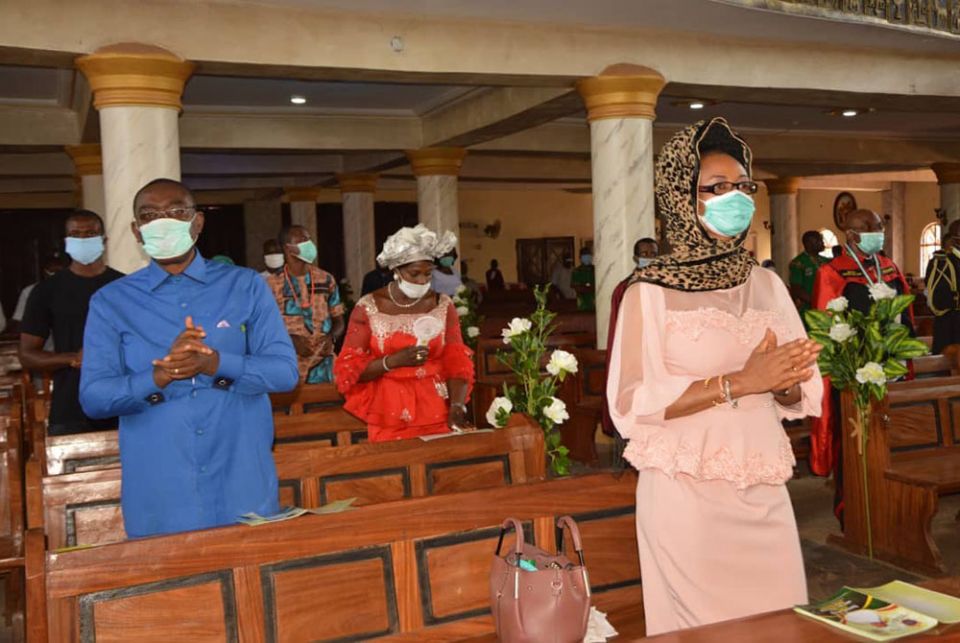 Parishioners during a Mass at the installation (Martin Anusi)

Installation amid a pandemic

Measures were put in place during the inauguration in line with safety guidelines by the Nigeria Centre for Disease Control, or NCDC, to combat the disease. The number of guests was limited because of the pandemic. The organizers had initially invited 30-50 persons but when the government relaxed the lockdown, the number of guests were increased between 100-150 persons while maintaining the social distancing rule. Thousands of parishioners who couldn't attend the event because of restrictions streamed online through the social media channels of the diocese.

"They had a rule that no one would enter the cathedral without a mask which will be provided at the entrance of the venue. And attendance was by invitation," Anusi, who was part of the organizers for the inauguration, said.

O'star Eze is a parishioner and member of the newly created diocese. He is excited with the developments. As a result of the pandemic, Eze joined other Catholics and well-wishers to stream the event online. Before the inauguration and through a Catholic WhatsApp forum, Eze alongside other members of the group, discussed and created awareness to others about the installation.

"It's something the people have been anticipating for a long time now. There is so much excitement here and it is going to set right a lot of things that had gone wrong in the Catholic Church in recent times," he said referring to the crisis at the former diocese.

Sisters and other religious at the inauguration c.jpg 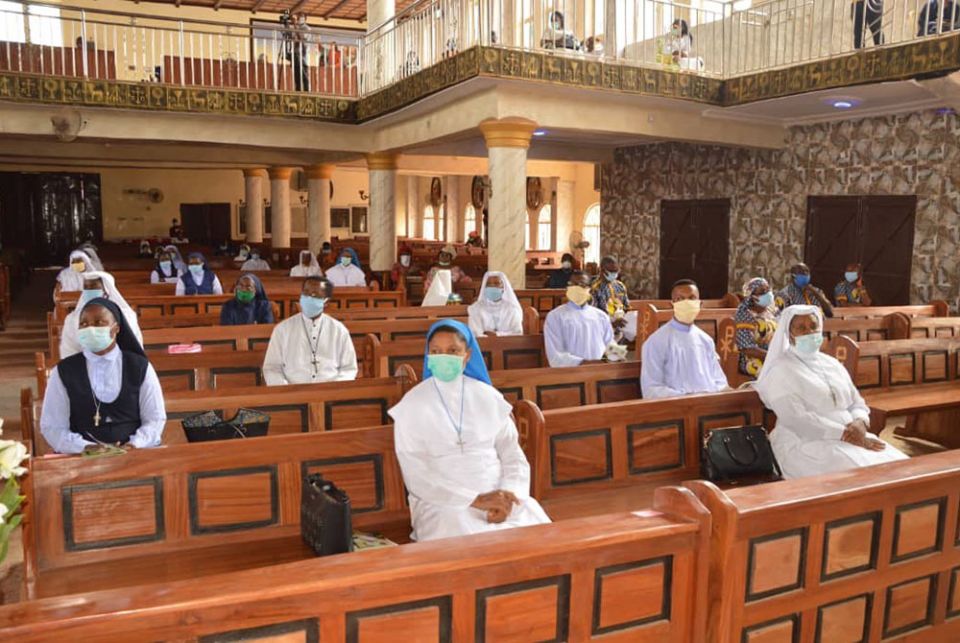 Sisters and other religious at the installation (Martin Anusi)

Eze added, "Things are bound to go wrong especially when you are dealing with human beings and the society. The installation is going to be a correction of an anomaly in the church and also send a message that the Catholic Church never leaves any vacuum."

The new diocese comes with some responsibilities, Eze said. "It comes with a sense of pride and responsibility because we know that the diocese has been created in our own town so a lot more would be expected of us in every aspect. I know it would come with its own spiritual blessings and we look forward to many outstations that would be converted to parishes for the expansion of God's kingdom."

NCR asked Anusi if Okpaleke's experience at his former diocese would have an effect on the way he would run his new diocese.

"I don't think so because he saw everything that happened as God's will in his life," he said. "When someone recently asked him if he has forgiven them, he said that there was nothing to forgive because he never felt offended because it's God's will. So, I'm sure it won't have any effect on him. Even before his appointment, he has been functioning and helping in his home diocese at Awka. He was very composed, coordinated, articulated and of course anyone that comes close to him would tell you that he is a great pastor."

'A wound has been healed'

For many priests and parishioners, the creation of the new diocese and the appointment of Okpaleke is "the healing of an old wound."

"We felt the pains when he was rejected as bishop and that was why we welcomed him with open arms when he came back," Eze says. "We feel a wound has been healed and we look forward to working with him and expanding God's kingdom under his leadership."

Fr. Ignatius Onwuatuegwu is pastor of St. Joseph's, a parish in the new diocese where he has been appointed as the episcopal vicar and cathedral administrator.

"We thank God for everything," Onwuatuegwu said. "The people are happy with this development because the rejected stone is now the chief cornerstone and will now bear fruit for us here."

After his appointment in March, a small group of priests, laity, religious and people from neighboring communities came to greet and welcome the new bishop. Local dance groups played musical instruments to entertain the small crowd. Anusi told NCR that the official welcome ceremony would be organized during the inauguration of the diocese after the pandemic.

"This is the best thing that could have ever happen to us as a people and it shows that the church is growing. We have long expected this," Onwuatuegwu said.

Standing in front of the church alongside priests and a bishop in the region during the event welcoming him to the Ekwulobia Diocese, Okpaleke addressed the crowd in an emotional tone.

"We thank God for this opportunity to be part of this diocese," Okpaleke told a group of priests and parishioners.

"We have longed for this but I never expected to be the bishop because I had gone on retirement, but I thank God for the opportunity and challenge."

He continued: "The work just started now. The church asked me to come here and I must obey. I thank everyone for coming to receive me. I ask God that gave us this diocese to give us the grace so we can all work together to the glory of God and salvation of mankind," he said amid cheers from the crowd.