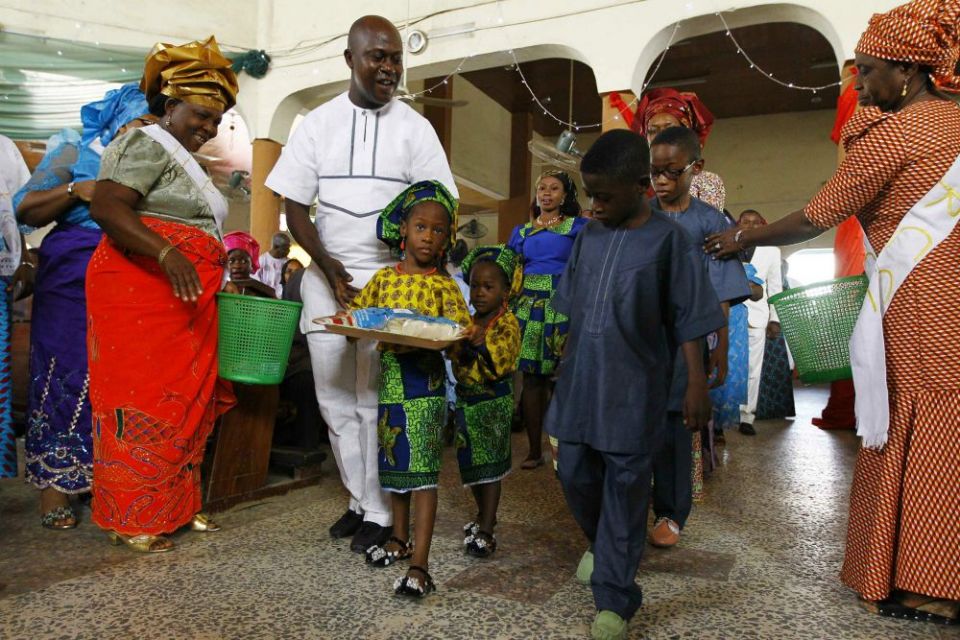 A Nigerian family is seen at Holy Rosary Church in Abuja, Nigeria, in this 2014 file photo. (CNS/Reuters/Afolabi Sotunde)

Abuja, Nigeria — The Nigeria Inter-Religious Council (NIREC) is working to defuse tensions between Christians and Muslims here, providing a forum since 1999 to enhance dialogue between the two groups.

Through the past two decades, the interfaith group has responded to crises that have wracked the country. 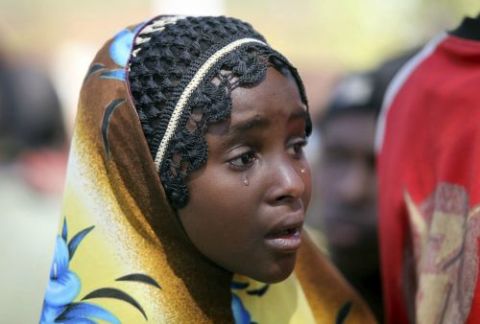 A girl cries at a camp for internally displaced people in Nigeria's central city of Jos Jan. 20, 2010. (CNS/Reuters/Akintunde Akinleye)

In February 2000, a violent crisis broke out in Kaduna state and other states in northern Nigeria between Christians and Muslims following the imposition of Sharia law in some states in the region. More than 3,000 people were killed, properties destroyed and about 60,000 persons displaced.

That was not the first inter-religious crisis in Nigeria. Since the return to democracy in 1999, Nigeria has witnessed scores of violent religious crises between Christians and Muslims. Nigeria is deeply divided along religious lines.

Fr. Cornelius Afebu Omonokhua, executive secretary of the Nigeria Inter-Religious Council, told NCR that the mission of the organization is to maintain peace and unity to strengthen the relationships between Christian and Muslims in the country. The council, he said, organizes meetings and dialogues where leaders of these two major religions in the country are invited to share their differences and challenges and find a way forward on peace-building initiatives.

"After that, we proffer solutions on the way forward to unite all fronts," Omonokhua says. "To a great extent, these dialogues and interactions have been working for us. All of them [Christians and Muslims] are realizing that we were all created by one God and that the only way to live is to love one another."

Apart from his work as the director of NIREC, Omonokhua contributes opinion articles regularly in Nigerian media where he discusses religious tolerance and the need for peaceful co-existence between Christians and Muslims in the country. His audience is wide and diverse, and he described his media work as "the right way of getting the message into the hearts of everyone irrespective of religious affiliations or background."

To get all groups involved, NIREC's membership comprises various religious organizations and councils across Nigeria. Presently, the membership includes the Christian Association of Nigeria (CAN), the president of the National Supreme Council of Islamic Affairs (NSCIA), traditional rulers and other religious actors across southern and northern Nigeria. The membership is evenly shared — 25 Christians and 25 Muslims.

Additionally, individuals have been in the limelight for promoting peace and love among the two faiths in Nigeria. In July, the United States government honored a Nigerian Muslim cleric, Abubakar Abdullahi, for risking his life to save over 250 Christians fleeing attacks from Muslim Fulani herdsmen in the state. More than 80 people were killed by the herders who attacked villages mostly dominated by Christians. 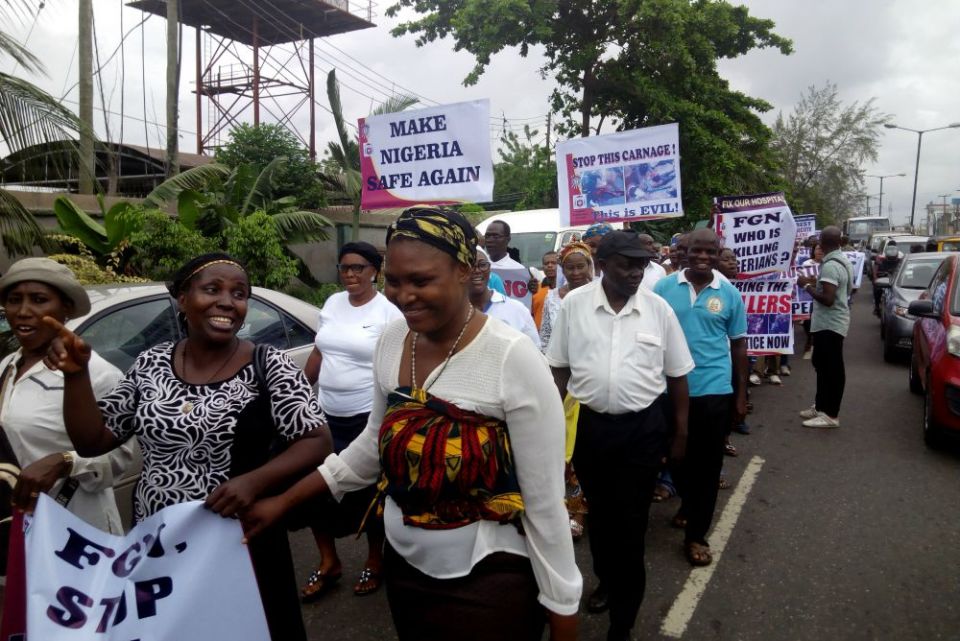 Nigerians carry placards during a May 22, 2018, protest in Lagos against the killing of innocent citizens, presumably by herdsmen, in some parts of the country. Catholics marched in various cities around the country. (CNS /Peter Dada)

"I believe that we do not allow the activities of extremists and fundamentalists to define our religions," Fr. Emmanuel Ojeifo, a priest of the Catholic Archdiocese of Abuja, told NCR. "In this regard, there are many Christian and Muslim leaders in Nigeria who have been at the forefront of joining efforts to denounce Boko Haram and to work towards rebuilding peace, dialogue, reconciliation, trust, mutual understanding and harmonious coexistence between Christians and Muslims in Nigeria. The sad reality is that the positive voices and initiatives of these religious leaders are not often given the kind of publicity that Boko Haram seems to enjoy." 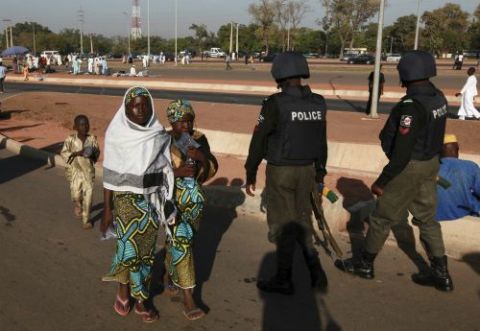 "The Catholic Bishops of Maiduguri and Yola have played important roles in this," Ojeifo said of the efforts at strengthening relationships between the two faiths. Some of the initiatives include providing relief for displaced people and organizing meetings with Christian and Muslim leaders in the region to rebuild the culture of mutual trust and understanding. Because the Boko Haram insurgency destroyed the sources of livelihoods of the indigenous of the Northeast, there have also been rehabilitation initiatives aimed at equipping displaced people with vocational skills. At the national level, two prominent religious leaders who have made efforts to build peace and reconciliation between Christians and Muslims are Cardinal John Onaiyekan, the Catholic Archbishop of Abuja, and the Sultan of Sokoto, Alhaji Muhammad Sa'ad Abubakar III, the leader of Islam in Nigeria. Both promote peaceful coexistence, interfaith dialogue, respect and mutual understanding between adherents of the two major faiths.

Nigeria and the World Seminar: The Role of Traditional Nigerian Leaders in Governance

The director of the Catholic Institute for Development, Justice and Peace, Fr. Chinedu Anieke, is advocating for a national conference on inter-faith dialogue, which he says would help strengthen the relationship between Christians and Muslims in Nigeria.

"It is important because we are all human beings and we share the same society together," Anieke said. "If dialogue is not promoted, there will always be quarrels and misunderstanding. It is the level of interfaith dialogue promoted already that is helping the society stay stronger at the moment. It would have escalated more than you see it now."

The leaders of Christians and Muslims in Nigeria who participate in NIREC dialogues and interactions for peace and harmonious relationships are expected to promote peace among their adherents.

"This way, the message gets to the least person in the community," Omonokhua says. "Their orientation changes automatically to embrace peace and love one another."

Quinn to priest group: Church poised at a moment of far-reaching consequences

Marriage: What's love got to do with it? Historically, very little