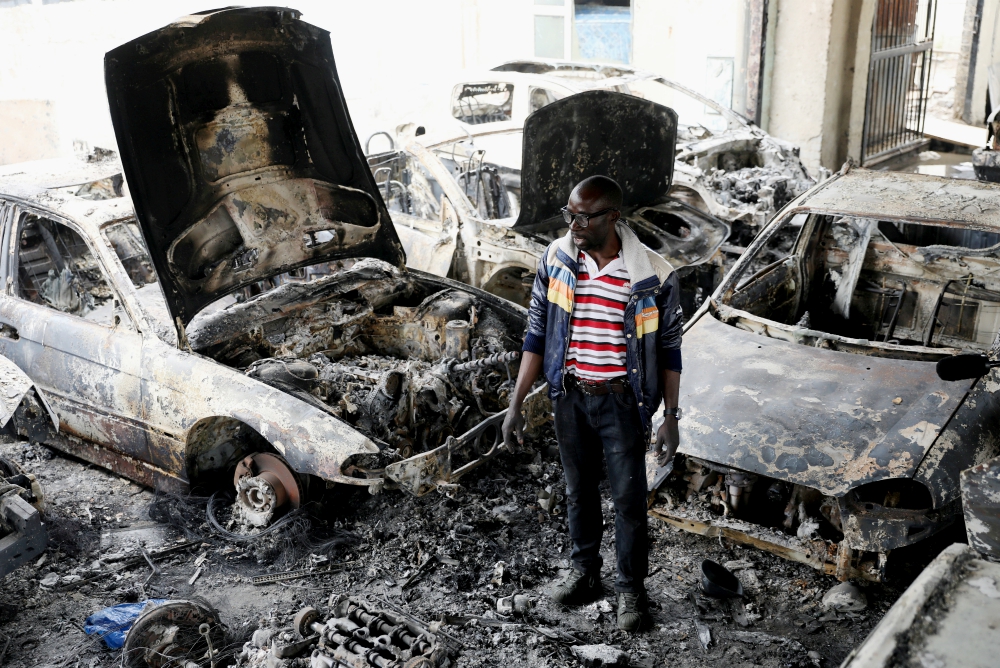 Nigerian entrepreneur Basil Onibo, one of the victims of a recent spate of xenophobic attacks in South Africa, looks at the burned cars at his dealership in Johannesburg Sept. 5. (CNS/Reuters/Siphiwe Sibeko)

In early September, violent riots targeting several stores owned by foreigners broke out across South Africa, in Johannesburg, Pretoria and surrounding areas. At least 10 people, including two foreigners, were reportedly killed in days of violence that erupted after armed mobs razed and vandalized several businesses and stores owned by immigrants. South African police in a Sept. 3 statement said they had arrested 189 people.

Attackers claim the foreigners are taking over their businesses and jobs and are bringing crime to South Africa.

In Nigeria, the Catholic community and authorities are speaking up against the attacks on not just Nigerians, but any foreigners living in South Africa.

The Catholic Bishops Conference of Nigeria in a statement at the end of their second plenary meeting condemned the recent xenophobic attacks by South Africans on foreigners.

"We pray for the peaceful repose of those who lost their lives and sympathise with those who have suffered," the statement said, adding that the bishops "draw the attention of all nations to Deuteronomy 10:18: 'He [God] defends the cause of the fatherless and the widow, and loves the foreigner residing among you, giving them food and clothing.' "

As the attacks were going on, Nigerians started reprisal attacks on South African investments, particularly supermarkets and telecommunication firms. The South African embassy in Nigeria temporarily shut down its activities over threats and fears of reprisal attacks. The Nigerian bishops' conference also condemned the reprisal attacks, saying two wrongs can never make a right.

"At the same time, we note that South Africa and Nigeria have come a long way in fraternal and diplomatic relations. We advise Nigerians living at home and abroad to be good and law abiding," the Nigerian bishops' statement said.

"It is a senseless and barbaric act that you rise up to attack people living in your country without any provocation," said Ayo-Maria Atoyebi, a bishop emeritus in southwest Nigeria. "Nigeria contributed a lot during their [South Africans'] fight for independence and against apartheid. Many of our people worked to help develop their country. Now that things are better for them, they have turned against us to say that we are denying them job opportunities in their country. This is wrong."

Atoyebi called on the South African government to take serious action that will put an end to the attacks.

"If these attacks continue, then the future consequences will be dire on all of us. These killings make children orphans and wives to become widows when their loved ones are killed in this way."

In addition to those in Nigeria, other Catholic authorities in Africa have spoken against the attacks. The bishops' conferences in South Africa and Zambia have also taken strong stands against the anti-foreigner attacks going on in the country.

"It is with dismay that we take note of the recent upsurge in violence against foreign nationals," Johannesburg Archbishop Buti Tlhagale of the South African Catholic Bishops' Conference Office for Migrants and Refugees said in a statement.

"Let us be absolutely clear — this is not an attempt by concerned South Africans to rid our cities of drug dealers. And this is not the work of a few criminal elements. It is xenophobia, plain and simple. ... If we do not take urgent action to stop it, there will be nothing left," Tlhagale said.

The Inter-Regional Meeting of the Bishops of Southern Africa [IMBISA] has also added its voice, expressing disappointment about the situation in one of Africa's most industrialized nations.

"The deplorable actions that we have witnessed cannot be condoned in any way nor can they be hidden behind words that hide the real terror of xenophobia," IMBISA said.

The organization includes bishops from Angola, Botswana, Mozambique, Namibia, South Africa, Swaziland and Zimbabwe. They added, "We implore the home nations of those affected, not to raise the stakes by responding in revenge with violence." 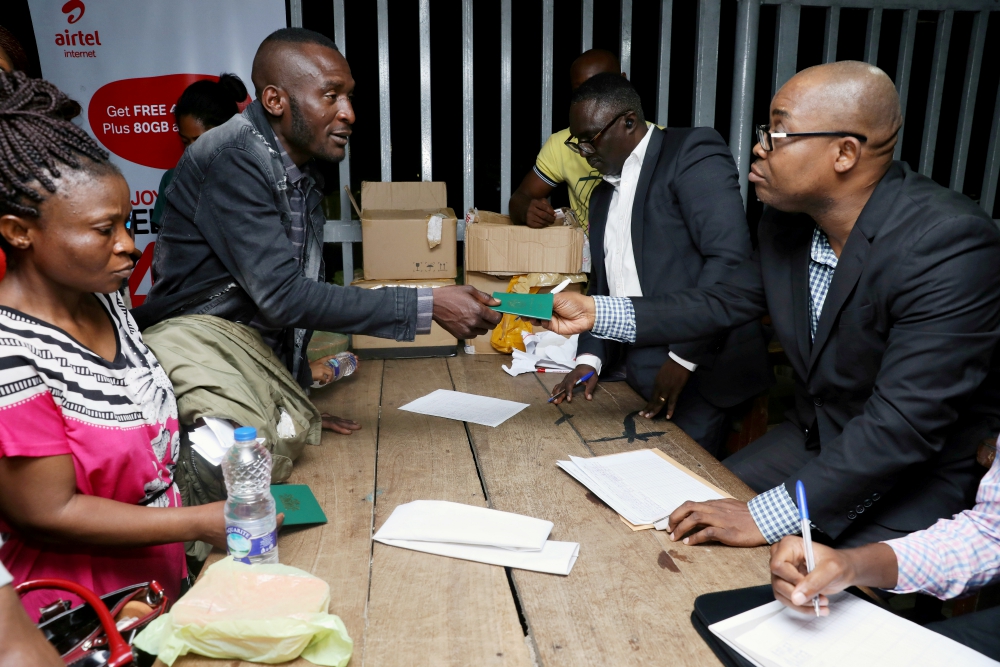 Two days after the attacks were reported, the Nigerian government recalled its ambassador to South Africa and pulled out of the Sept. 4-6 World Economic Forum on Africa taking place in Cape Town, South Africa.

Amid growing tensions and criticisms, President Muhammadu Buhari left Nigeria for South Africa on a three-day visit in early October. Buhari and South African President Cyril Ramaphosa discussed the growing attacks on foreigners in the country, trade and political cooperation. The two leaders also discussed the need for increased policing and sharing of data and intelligence as early warning mechanisms to reduce the rate of anti-foreigner attacks.

Currently, more than 600 Nigerians living in South Africa have returned home and efforts by the Nigerian government to resettle the returnees with skills and small funds to startup businesses are ongoing.

But Atoyebi says the root cause of the attacks on foreigners should be addressed instead.

"If we don't do this, there will be a recurrence and we will have more returnees and a situation where we have to start resettling them again," he said.