'Nothing' bishop gets frank on married priests, Vatican under Francis 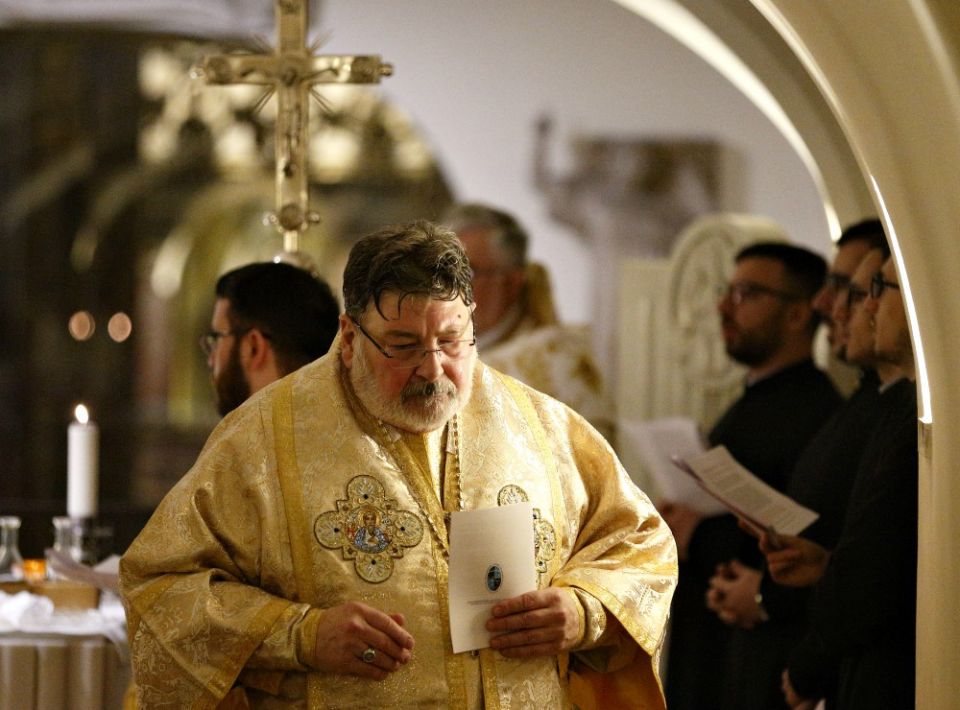 Bishop John Michael Botean of the Romanian Catholic Eparchy of St George's in Canton, Ohio, returns to his seat after receiving Communion as bishops of the Eastern Catholic churches in the U.S. concelebrate a Divine Liturgy in the crypt of St. Peter's Basilica at the Vatican Feb. 18. (CNS/Paul Haring)

Rome — If you believe Bishop John Michael Botean's description of himself, he's "a nothing bishop from a nothing diocese."

If so, that self-described identity appears to have bestowed on the Ohioan a rather unusual level of candor for a U.S. prelate.

At different points in an hourlong interview Feb. 18, Botean, who leads the only Romanian rite Catholic diocese in the U.S. and Canada, warned that one of his comments might "curl some hair," spoke frankly about how other American bishops see Pope Francis, and asked if he could take back referencing a recent visit to the "Holy Office of the Inquisition."

On the last subject, Botean was not only blunt, but somewhat emotional. He mentioned that most of the about 25 priests he has to serve a diocese that spans nearly a dozen states and provinces, are, like many other Eastern rite clergy, married.

"I haven't read the book, but the assertion that celibacy is somehow ontologically connected to the priesthood is something that I will leave to other cardinals and higher-ups to dispute," said the bishop. "And I believe they will."

Botean, who leads the Eparchy of St. George's in Canton, Ohio, the Romanian Greek Catholic Church's only diocese abroad, was speaking in a joint interview with NCR and Catholic News Service.

The prelate is in Rome this week alongside 14 other U.S. Eastern rite Catholic bishops and eparchs for their ad limina apostolorum visit, during which they meet with the various Vatican offices and are scheduled to have an encounter with Francis on Feb. 20.

They are the last of the 15 regions of the U.S. bishops' conference to make the visits, which have been taking place in turns since the beginning of November. 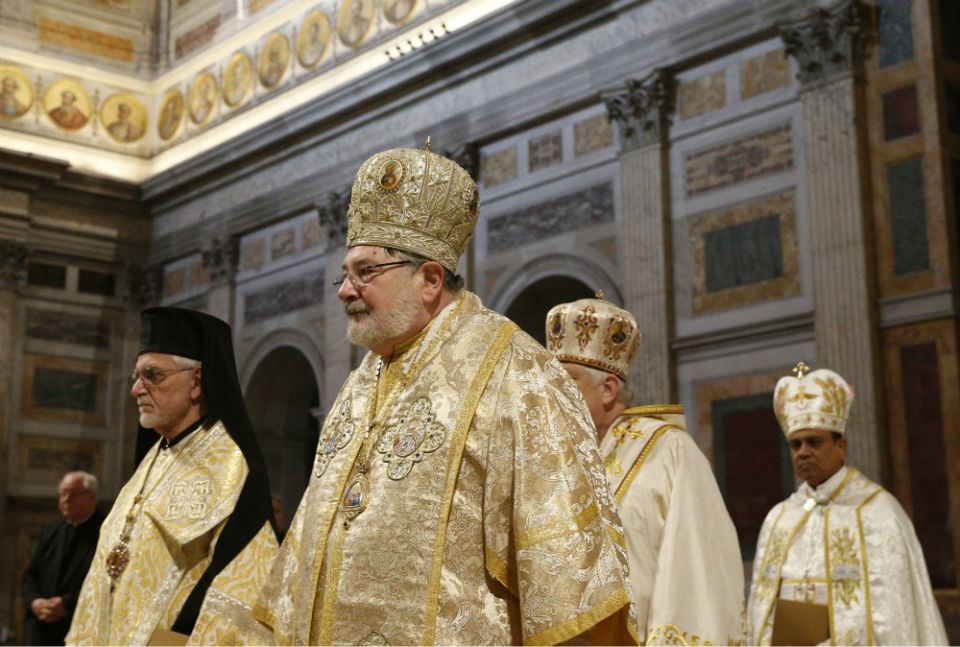 Bishop John Michael Botean of the Romanian Catholic Eparchy of St George's in Canton, Ohio, center, and other bishops of the Eastern Catholic churches in the United States arrive in procession to concelebrate a Divine Liturgy at the Basilica of St. Paul Outside the Walls in Rome Feb. 17. (CNS/Paul Haring)

Botean, who has served in his role since 1996, is among a small handful of U.S. bishops to have made four of the approximately once-a-decade ad limina visits — twice under John Paul II, once under Benedict XVI, and now once under Francis.

Echoing what prelates from other regions have said, Botean described a noticeable difference in meetings with Vatican officials under the first Argentine pontiff.

"Last time, one thing I realized after we came here is, 'Oh my God, they can yell at all of us all at once,' " the bishop joked, before adding: "Not now. It's been wonderful."

"Our last ad liminas as bishops was [under] Pope Benedict, of course, and it was a different atmosphere," the bishop added later.

"To hear the leaders of the [Vatican] congregations now encouraging us to get deeper into the Christian mysteries and reflect the openness and joy the Gospels are supposed to provoke, instead of getting into the nitty-gritty of disciplinary issues, has been really, really refreshing," he said.

Botean recounted Cardinal Luis Ladaria, the head of the Vatican's powerful Congregation for the Doctrine of the Faith, telling the Eastern rite prelates: "The church is beautiful. We have to tell the story of the beautiful church."

"Coming from the ... Holy Office of the Inquisition, as it used to be known, that's a great thing to hear," said the bishop, before correcting his century-old reference with a deadpan: "It's a venerable institution in the church, with a history that one cannot forget."

"What's going on now is vastly different," he continued. "It was about control. I don't think that's the emphasis as much."

Asked what he's planning to say to Francis in their meeting, Botean responded: "What I'm mainly going to want to say is thank you."

"I wish that was a little more of a common sentiment I would hear among bishops in the U.S.," said the prelate.

"But I don't hear too much, and I keep my own counsel," he quickly added. "That's another advantage of being a nobody bishop of a nothing diocese."

Married priesthood 'not a panacea'

Botean estimates that his diocese serves between 50,000-75,000 Romanian rite Catholics.* Traditionally comprising a 20th-century immigrant population that settled across parts of the northern seaboard and the Midwest, his community now has missions in California, and in Toronto and Montreal, he noted.

He spoke about the work of his clergy in response to a question about the conversations about the married priesthood that have been provoked by last fall's Synod of Bishops from the nine-nation Amazon region.

The 185 members of the synod voted by a two-thirds majority to ask Francis to allow for the ordination of married priests in their areas, in order to address a severe lack of ministers across the vast, hard-to-traverse region. In his post-synodal apostolic exhortation Querida Amazonia, released Feb. 12, the pontiff did not address the issue.

"It's not a panacea," Botean said about having a noncelibate priesthood. "As many centuries as the Latin church has had without a married priesthood, it would be a lot of adjustment. And a lot of expectations that families would have that might not be realistic."

The bishop spoke about some of the more mundane logistical issues in working with married clergy members. He mentioned that the Code of Canons of the Eastern Churches specifies that it is the bishop who "freely names" pastors.

"I always chuckle when I read that because I could freely name a pastor in a parish — if his wife is OK with moving to that city, and, if they do, then it has to be in the summer, when school is out," said Botean. 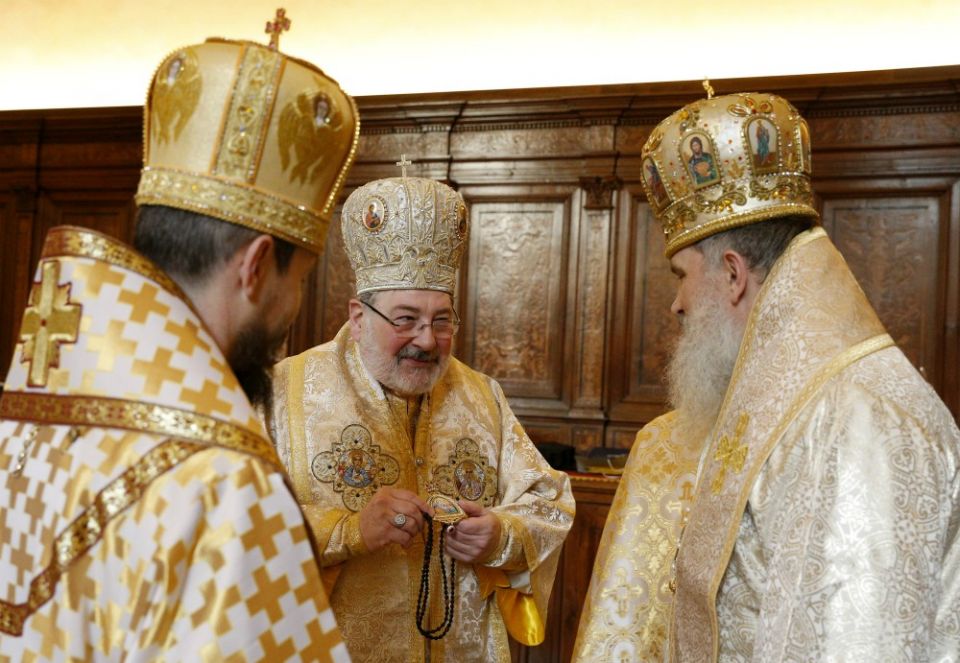 Bishop John Michael Botean shows a religious image to Bishop Milan Lach of the Byzantine Catholic Eparchy of Parma, Ohio, left, and Bishop Venedykt (Valery) Aleksiychuk of the Ukrainian Catholic Eparchy of St. Nicholas of Chicago as bishops of the Eastern Catholic churches in the U.S. prepare to concelebrate a Divine Liturgy at the Basilica of St. Paul Outside the Walls in Rome Feb. 17. (CNS/Paul Haring)

"That has contributed to something that is a part of our pastoral experiences, which is a great deal more stability," he said. "When you're a priest in a parish, you could easily be there most of your life. There's always the bonds that develop between the generations in a parish and the parish priest."

Botean also gave high praise to the wives of his married priests for the model of leadership they provide in their communities. As an example, he referenced the wife of the rector of his cathedral parish, who he called "a real leader in the parish."

"Her leadership is critical to the rector's leadership," said the bishop. "Her role in the parish is huge."

For a certain segment of the U.S. Catholic population, especially peace activists, Botean is something of a folk hero. In 2003, shortly before the U.S.-led invasion of Iraq, he was the only American prelate to speak out directly against the instigation of conflict, calling it an "objectively grave evil, a matter of mortal sin."

Talking about issues of war and violence during the interview, the bishop started with some more frank talk.

Asked about what he hopes Francis understands about the U.S. political environment, Botean responded: "To have any leverage with the administration or with the U.S. government in general ... the U.S. bishops have to have his back, big time."

"I don't want to judge what the situation of that is, but I don't suppose it's what it could be," he added.

About the Eastern rite Catholic dioceses in the US

Bishop John Michael Botean's Eparchy of St. George's is the only diocese abroad of the Romanian Greek Catholic Church, one of 23 Eastern rite Catholic churches. Those churches are in full communion with Rome, but practice their own liturgical traditions and are governed by their own canons, in accordance with the Code of Canons of the Eastern Churches.

A unique feature of the ad limina visit being made this week by the U.S. Eastern rite bishops is the celebration of liturgies at churches in Rome according to a diverse number of rites. Early in the morning Feb. 18, the prelates celebrated liturgy in the crypt of St. Peter's Basilica in the Armenian rite, which is particularly known for the complex harmonies of its musical compositions.

Asked why a Latin rite Roman Catholic should know more about the Eastern rite traditions, Botean responded: "If a Catholic who wants to know the Catholic Church, they need to know us. Because we're a part of it. And Christianity has many forms outside of Western Christianity."

But Botean then spoke much more introspectively, reflecting on how he understands nonviolence teachings in light of Christian, and specifically Byzantine, spirituality.

Referencing the number of Christians who have died in the Middle East since the invasion of Iraq, the bishop said: "What we are experiencing now is a new era of martyrdom, and I think that has yet to bear the fruit that God wants it to bear in the church."

"I think that will perhaps give us the boldness that we need to say ... 'Christ disarmed Peter, he disarmed every Christian,' " he said.

"By little and by little, as Dorothy Day would say," he continued. "We keep planting the seeds. And we keep watering, we keep weeding. It really becomes an exercise of faith."

Several times, Botean mentioned that his own interest in nonviolence teachings was sparked by his friendship with Fr. Emmanuel Charles McCarthy, a Melkite Greek Catholic, peace activist and author whom the bishop called his "spiritual father."

Botean said that during one of his previous ad limina visits under John Paul II he had brought copies of a book by McCarthy focusing on the nonviolent aspect of the Eucharist to share with the pontiff and some of his advisers, including Capuchin Fr. Raniero Cantalamessa, who has served as the preacher of the papal household since 1980.

But the Eastern rite prelate said that even he has trouble raising the issue sometimes. He said that one of the members of his cathedral parish is the local sheriff, who comes into the church wearing his firearm.

"He's the sheriff," said Botean. "I think he's required to be armed all the time. He's very discreet about it. But I don't feel I can bring that up yet."

"It's easier to speak boldly in front of cardinals and popes, I suppose, than your own people," he joked.

A version of this story appeared in the March 6-19, 2020 print issue under the headline: 'Nothing' bishop gets frank .

People | 'Nothing' bishop gets frank on married priests, Vatican under Francis