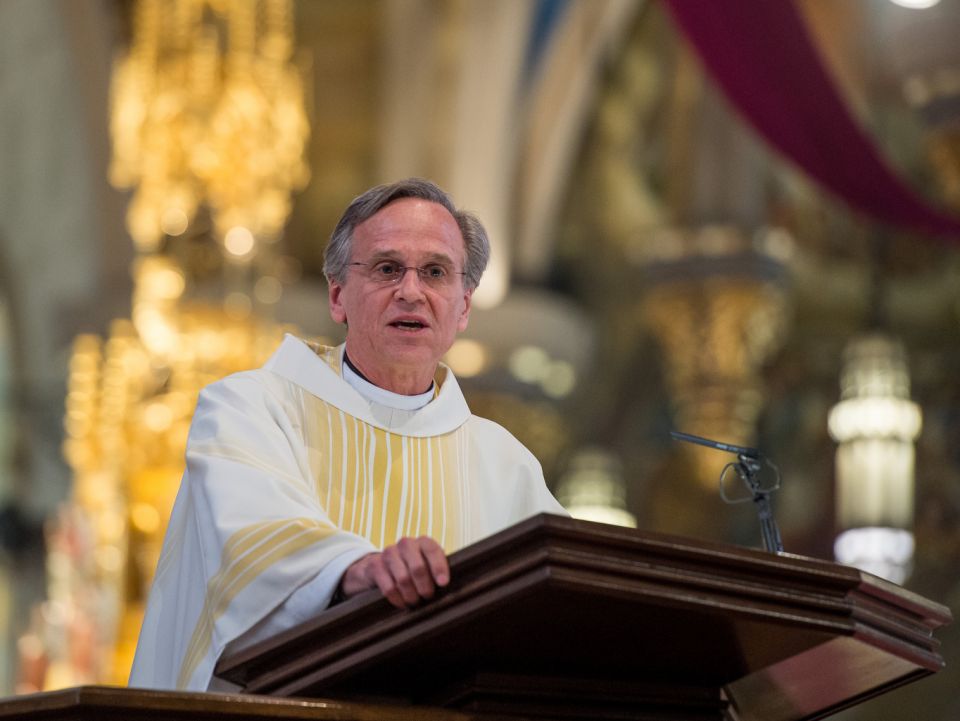 South Bend, Ind. — An Indiana bishop said he supports the University of Notre Dame's Feb. 7 decision to stop coverage of abortion-inducing drugs and add natural family planning services to the school's health plan, but he said coverage of artificial birth control by a Catholic institution is unacceptable.

"I strongly support the decision of the University of Notre Dame to stop the government-funded provision, through its third-party administrator, of abortion-inducing drugs and sterilization procedures," Rhoades said in a statement provided to Catholic News Service Feb. 8. "I am also happy that the university will provide natural family planning services in its insurance plans.

"At the same time, I strongly disagree with Notre Dame's decision to provide funding for contraception in its health insurance plans which involves it even more directly in contributing to immoral activity," he added.

Rhoades made the comments in reaction to the announcement by Holy Cross Father John Jenkins, Notre Dame's president, that the university had once again made changes on coverage of contraceptives in its health plans.

In October, Jenkins joined other Catholic leaders in praising a decision by the Trump administration to expand the religious exemption to an Obama-era mandate that all employers cover sterilizations, contraceptives and abortifacients even if an employer was morally opposed to such coverage. The priest in a university email to employees stated that the previously mandated coverage would end Dec. 31.

In reaction to that decision, a small campus protest took place, organized by the Notre Dame Graduate Workers Collective, an independent group of graduate students. The group also had gathered about 500 signatures on a petition calling on university officials to "respect our freedom to make reproductive, family, and religious choices without economic coercion."

The university reversed course Nov. 7, informing employees that third-party health plan administrator Meritain Health and prescription benefit manager OptumRx would continue to provide all those items free of charge. Students also were informed that their coverage would continue.

A statement from Paul Browne, Notre Dame vice president for public affairs and communications, said the reversal came after the university learned the insurers would continue the coverage at no cost, so the university opted not to "interfere."

In late January, some University of Notre Dame students, faculty and alumni voiced strong public criticism over the university administration's decision to continue employee insurance coverage for sterilizations, contraceptives and abortifacients after a federal mandate to do so was amended late last year.

Many also questioned how Notre Dame -- alongside other Catholic universities, dioceses and other entities -- could have fought in the courts for a lifting of the Obama-era contraceptive mandate and then gone ahead and allowed the third-party coverage  of morally objectionable services.

Jenkins in a Feb. 7 letter to the university community announced his latest decision on the coverage.

He acknowledged he had received emails and letters about the university's policy "on access to contraceptive coverage" and had spoken to faculty staff and students, and after further thought announced "steps based on Catholic principles that nevertheless provide access to some of the coverage that members of our community seek."

"Stopping any access to contraceptives through our health care plan would allow the university to be free of involvement with drugs that are morally objectionable in Catholic teaching," Jenkins said, however that decision "would burden those who have made conscientious decisions about the use of such drugs and rely on the university for health care benefits."

"The situation is one that demands discernment -- something to which Pope Francis has called the church in his various writings and addresses," Jenkins said. "Discernment, which has a long history in the Catholic spiritual tradition, is, of course, a process of weighing thoughtfully considerations for and against various courses of action. Yet it also demands prayerful attention to God's guidance through the prompting of the Holy Spirit."

In his statement, Rhoades said, "I hope and pray that the university will reconsider its decision."

As the bishop of the diocese of which Notre Dame is a part, "I wish to remind all the faithful of the diocese, including the faithful who are part of the Notre Dame community," he said, "of the church's definitive teaching that 'every action which, whether in anticipation of the conjugal act, or in its accomplishment, or in the development of its natural consequences, proposes, whether as an end or as a means, to render procreation impossible is intrinsically evil.' (Catechism of the Catholic Church No. 2370)."

He encouraged "all who struggle with this teaching to study prayerfully this teaching of the church," especially Blessed Paul VI's 1968 encyclical, "Humanae Vitae," ("Of Human Life"), which affirmed Catholic teaching against artificial contraception, and "the rich teaching" of St. John Paul II's "theology of the body."

"Many Catholics have come to a greater understanding and appreciation of the church's teaching through such study and prayer," Rhoades said.

"Notre Dame bears prophetic witness to the truths of the Catholic faith in its words and actions on many issues of importance for the good of our society," Rhoades said. "Not providing funding for contraception would not be popular with some, but it would truly be a prophetic witness to the truth about human sexuality and its meaning and purpose."

A version of this story appeared in the Feb 23-March 8, 2018 print issue under the headline: Bishop objects to Notre Dame's change on contraceptives .

Democratic fallout from Hobby Lobby decision is 'no surprise'