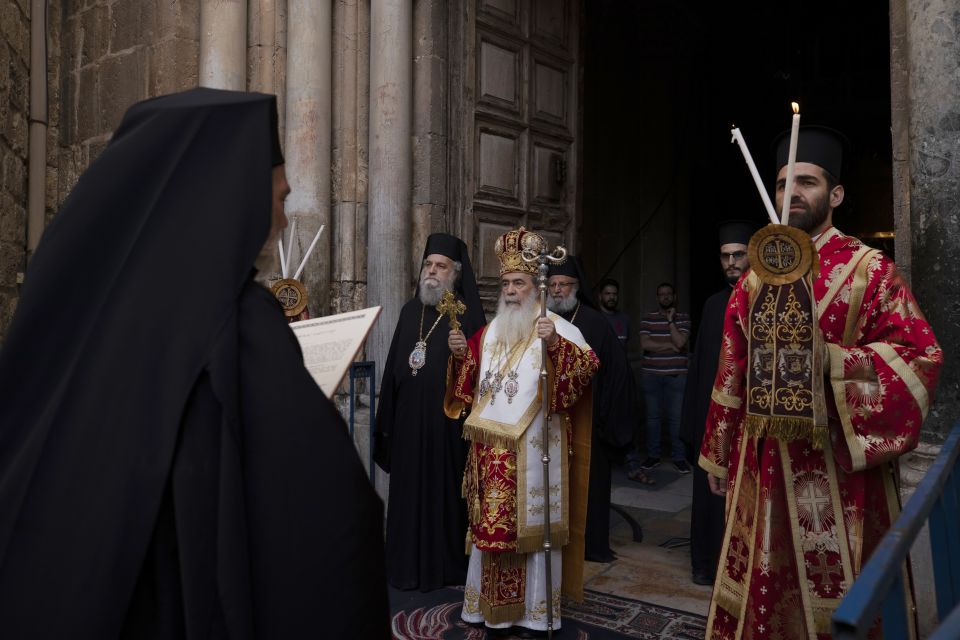 Greek Orthodox Patriarch of Jerusalem Theophilos III, center, walks in procession for the Washing of the Feet ceremony during the orthodox Holy Week at the Church of Holy Sepulchre, Thursday, April 29, 2021. (AP Photo/Maya Alleruzzo)

Amman, Jordan — The Orthodox patriarch of Jerusalem, Theophilos III, whose authority extends over some 130,000 Middle Eastern Christians, has posted a memo on the patriarchate website that appears to overturn a 45-year-old agreement with Western Christian churches to unify the celebration of Christian holidays.

Since 1975, Western and Eastern Christians in Jordan, the Palestinian territories (with the exception of Jerusalem and Bethlehem) and Israel have publicly celebrated Christmas according to the Gregorian calendar, on Dec. 25, and Easter according to the older Julian calendar, which the Eastern Orthodox Church still abides by to determine feast days.

On the Julian calendar, Christmas falls on Jan. 7, while Easter is typically a week later than in the West.

In Muslim-majority Jordan, the 25 of December is a national holiday, while Easter is not. Muslims believe in the virgin birth of Jesus. Christmas is also celebrated publicly in Palestinian cities in Israel such as Nazareth.

The patriarch's memo, which appeared Saturday (Nov. 27), calls for abstaining from any Christian carols on Dec. 25, which in the Eastern church is the feast of St. Spyridon. The memo says the liturgy for the day should observe the service of "Saints Spyridon, Bishop of Trimythus the wonderworker," and "not the service of Christmas day of 25th December."

The patriarch goes on to say: "During this day, after the observed service of the feast of Saint Spyridon, the members of the Greek Orthodox flock may proceed to demonstrations of a social but not ecclesiastical character." The memo ends with the call for total observance of the memo, saying, “Expecting your conformity.”

Many Christians have responded, however, with anger and have vowed on social media not to heed the patriarch's call. Others have said they will start a petition to oppose the memo.

Nidal Qaqish, a member of the Orthodox Central Council for Jordan and Palestine, told Religion News Service that the united holidays were agreed to by Christian leaders from all denominations and had the blessing of Jordan's former ruler King Hussein.

“Any effort to reverse that is an attack against the will of the Christians in Jordan and that of His Majesty the King," Qaqish said.

But Audeh Qawas, a Jordanian Christian member of the Senate who is close to the patriarch, told RNS that the patriarch's decision is not new. The same edict is issued every year, Qawas said, and applies only to how Orthodox priests observe the holiday, not the public.

But critics have pointed out that the memo online addresses lay heads of local congregations as well as clergy. “We will wait to see it removed from the church’s website," said Qaqish.

Botrus Mansour, president of the Evangelical Council in Israel, said decisions about the Christian holidays should not be made by any one denomination. “We have gone a long way into unifying the holidays," he said, "and now Patriarch Theophilos is bringing us backward.”

Mansour, who is also executive director of the Baptist School in Nazareth, said the Christian presence is so small that Christians need to work together to celebrate all at the time. “Unity has a special taste in the town that Jesus himself was raised and where the love of God was incarnated.”

Latino theologians get 'in the ministerial trenches'