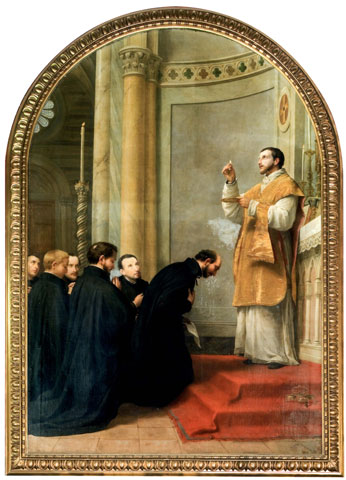 I want to propose a new patron saint for business people: Peter Faber.

On Dec. 17, Pope Francis signed the bull of canonization recognizing Faber as a saint, and the relatively low-key elevation -- no ornate Mass in St. Peter's Square for poor Faber -- is in keeping with his relative obscurity in the Jesuit pantheon. Faber was among the handful who co-founded the Jesuit order in the mid-1500s, but he never quite attained the renown of St. Ignatius of Loyola and St. Francis Xavier. No Jesuit church is complete without some triumphalistic mural or statuary of Loyola or Xavier. But Faber? He is usually one of an indistinguishable line of black-robed Jesuit extras, looking plastically pious at stage left of the mural.

His ministry was vital but not headline-grabbing. He was an extraordinarily capable spiritual director who reinvigorated clergy and bishops who had grown decadent, and patiently drew wavering Catholics back to the fold at a time when the Protestant Reformation was sweeping Europe. In an interview with La Civiltà Cattolica, Francis praised Faber's style, his "dialogue with all ... even with his opponents ... his simple piety ... his careful interior discernment ... capable of being so gentle and loving." Faber's patient but ever-persistent outreach, his "frontier spirit" so to speak, embodies the culture change Francis is trying to engender in our church at large.

But how does Faber become my patron saint of business?

Once, on mission to Mainz in Germany, he was appalled by its widespread poverty. "Having arisen in the quiet of the night to pray," he wrote, "I felt strongly inspired to do my very utmost to provide for the needy and homeless sick wandering about the city of Mainz." Faber, estimating that there were some 6,500 beggars in the city, concluded: "Perhaps if we [Jesuits] had a flair for business ... and we had not such a [spiritual] harvest to be reaped ... we could concern ourselves more with this problem."

Faber's vision of the positive role of business is remarkable. He wrote two centuries before Adam Smith lifted a pen, during an era when the Catholic church generally looked askance at business. Yet in a few short phrases, Faber crystallizes a profound and profoundly challenging philosophy of business.

First, business, when done well, plays an unparalleled role in enabling individuals to support themselves and their families with dignity. Faber's reaction upon seeing so many beggars? Not "We need a soup kitchen" but "We need businesses." Of course, charity is also essential: Jesus told us we're going to hell if we don't cloth the naked and feed the hungry. But Faber also perceives the unique role of business in creating positive, systemic, long-term societal change.

Second, Faber recognizes that great businesspeople have a "flair." The imagination to identify unmet needs, the willingness to try something new and bear the risk of failure, the scrupulous attention to detailed execution, the ability to inspire team members, and a hundred other things all mark the flair of good business people. These are talents, gifts from God, and ought to be recognized as such. It is not a sin to succeed in business by employing these talents fully.

But Faber implicitly challenges businesspeople that their talents are only being used well when they maintain a proper perspective on life. Business and money-making are not the highest ends: "If there were not such a harvest of souls to reaped," Faber writes. Our destiny lies beyond this world, and we're here for purposes beyond what we can sell, trade, build, buy, flaunt or own during this short earthly sojourn. That includes, if we are businesspeople, remaining aware that our every business decision impacts, for better or ill, the lives of employees, customers, shareholders and communities.

Faber's vision of business is an ennobling, inspiring one. Entrepreneurs with a Faber-style flair for business don't think only of "enhancing shareholder value" and making themselves hog-whimperingly rich; they hop out of bed each morning feeling blessed to help fellow citizens use their talents, support their families in a highly dignified way, and alleviate poverty in their communities.

Francis' apostolic exhortation, Evangelii Gaudium, also has plenty to say about the role of business, launching salvos, for example, at a business culture that sometimes turns money into a modern-day golden calf. Catholics and pundits more generally have rushed to react with predictable party-line tropes. Republican Catholics tsk-tsk that the pope really doesn't understand how markets work; Democratic Catholics reduce the pope's agenda to nothing more than an endorsement for more aggressively redistributionist tax policies. But a close read of his exhortation reveals challenges and affirmations for all Catholic parties and tribes in this debate.

In fact, the pope, like Faber, is calling businesspeople and all of us to ponder our human vocation in much more fundamental ways. After all, that's what great leaders do, whether popes or entrepreneurs with a flair for business. They try to inspire us to transcend our ideologies and differences and coalesce around a higher viewpoint.

[Chris Lowney, author of Pope Francis: Why He Leads the Way He Leads (Loyola Press), was formerly a managing director of J.P. Morgan & Co. and now chairs the board of Catholic Health Initiatives, one of the nation's largest health care/hospital systems.]

Saint was the first Jesuit ordained

St. Peter Faber, who was born in 1506 in what is now France, shared lodgings with Ignatius and Francis Xavier at the College of St. Barbara at the University of Paris. Faber was the first of the Jesuits to be ordained a priest and he celebrated the Mass in 1534 during which St. Ignatius and the others took their vows of poverty, chastity and obedience.

The pope began "by mentioning Ignatius Loyola and Francis Xavier, but then focuses on a figure that other Jesuits certainly know, but who is of course not as well-known to the general public: Peter Faber (1506-46)," Spadro wrote.

A version of this story appeared in the Jan 17-30, 2014 print issue under the headline: The new patron saint of business?.