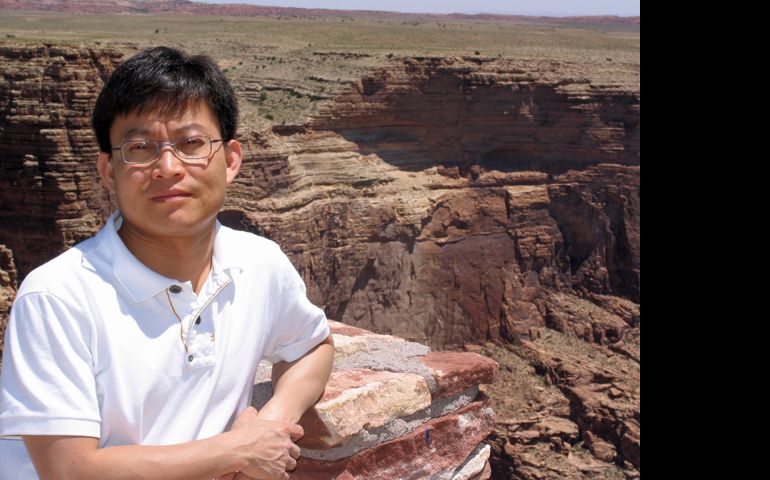 A young theologian and priest with a global reputation as a rising pioneer in the field of theological ethics died suddenly Tuesday, just months before he was to host a first-of-its-kind conference bringing together ethicists across Asia.

Jesuit Fr. Lucas (Yiu Sing Luke) Chan, a Hong Kong native who recently joined the faculty of Marquette University in Wisconsin, died Tuesday after collapsing at his office following a morning workout. He was 46.

Chan's sudden death left a number of renowned theologians around the globe at a loss for words -- struggling to evaluate the life and work of a priest, theologian and friend they thought would have much more time to leave an imprint on his field.

Among those immediately sending tributes were noted academics across the U.S., Ireland, Germany, Italy and India.

Linda Hogan, the vice provost and chief academic officer for Trinity College Dublin, said it was a "tremendous privilege" to have known and worked with the Jesuit. While he was only beginning to gain recognition in his field, said Hogan, "it was already overdue since his publications were significant and profound."

Jesuit Fr. Jim Keenan, the Canisius Professor in theology at Boston College who served on Chan's dissertation committees for his licentiate and doctorate degrees in theology, sent an emotional email calling the man his best friend.

"Lucas was at the beginning of a stellar career," said Keenan, who also worked with Chan as part of a global network of moral theologians called the Catholic Theological Ethics in the World Church.

"Fortunately he leaves us significant books and quite a number of essays," Keenan continued. "But more than anything he was very happy that he could be a part of something that meant the world to him and to others and he was excited by the way this work brought him into connection with others in his parishes, his classrooms, his conferences or his friends and family."

Chan, who focused his work in the still-emerging field of biblical ethics, was seen by many as a key leader in the academic effort to translate biblical teachings to the moral lives of ordinary Christians. He published an essay on the subject in March in Theological Studies, one of the premier global academic theological journals.

That essay followed publication of two books that offered wide-ranging reviews on the subject: Biblical Ethics in the Twenty-first Century: Developments, Emerging Consensus, and Future Directions, published by Paulist Press in 2013, and The Ten Commandments and the Beatitudes: Biblical Studies and Ethics for Real Life, published by Rowman and Littlefield/Sheed and Ward in 2012.

At the time of his death, Chan was editing a text that brought together 24 biblical scholars and ethicists from 17 countries.

To be published in 2016 by Orbis, The Bible and Catholic Theological Ethics was to see contributions from a number of noted academics, including Boston College's Lisa Sowle Cahill, Argentina's Maria Cunéo, biblical scholars Jesuit Fr. John Donahue and Gina Hens-Piazza, and Australian Salesian Fr. Francis Moloney.

Those meetings, for which Chan served as a member of the planning committees, saw some 600 theologians gather for what may have been the first such meeting to discuss global trends in theological ethics.

The Jesuit was helping organize a regional meeting of the theological ethics group in Bangalore, India, for July that is to see dozens of prominent academics across Asia gather to discuss doing theology in a cross-cultural and interfaith Asian context.

Chan was chairing the preparation for that meeting alongside Indian Carmelite of Mary Immaculate Fr. Shaji George Kochuthara, who said the Jesuit was a "great help" in reviewing articles for the theological journal Asian Horizons.

Chan, Kochuthara said, "worked hard to contact Catholic ethicists from various Asian countries, thus preparing the ground for a real cross-cultural dialogue in Catholic ethics to serve the Asian and universal Church and humanity as a whole."

Franciscan Fr. Kenneth Himes, a theology professor at Boston College known for his work on Catholic social teaching, said Chan "helped many of us in the West appreciate the scholarship and contributions of Catholic theologians writing from an Asian context."

"His early work on scripture and ethics was impressive and many of us thought he had a promising future bringing biblical studies and theological ethics into closer and deeper collaboration," Himes said. "As a person Lucas was ever gracious, joyful, and friendly."

"Though many Catholics might not know his name I think the death of this young Jesuit theologian is a great loss for the Catholic community," the Franciscan continued.

Besides his work in theology, Chan was also an avid amateur photographer, relied upon often to capture the moments of theological meetings around the world. After a groundbreaking meeting on African theology in Nairobi, Kenya, in 2012, Chan joined a number of other theologians in a safari in the Maasai Mara National Reserve.

Standing amid wildebeests, zebra and elephants from an open-top Jeep, the Jesuit kept mentioning how all he wanted from the trip was a nice picture of a lion. "Go, go, go!" he exhorted the driver over and over again in trying to follow different lions roaming the preserve.

Fr. Antonio Autiero, an Italian theologian who retired in 2013 after two decades of teaching at Germany's University of Münster, said Chan's photography talent emphasized his ability to inhabit different cultures and to "inhabit the land where he was; he wanted to have a keen eye, alert, able to grasp the details."

"Lucas knew how to read the reality, discovering interesting aspects," Autiero said. "His curiosity was well expressed by his skill and passion for photography. The camera was his magnifying glass on the reality that he loved to read in the originality of image and scene."

Born June 7, 1968, in Hong Kong to a mother who had been orphaned and a father who had run away from home at a young age, Chan was a high school teacher in the city before going on to earn a bachelor's degree in philosophy at the Holy Spirit Seminary College of Philosophy and Theology, affiliated with the Pontifical Urbaniana University in Rome.

The Jesuit spoke fluent Cantonese, English and Khmer, the official language of Cambodia.

Robert Masson, the department chair in theology at Marquette, said he and his community were "still reeling" from Chan's death.

"Lucas had just joined us in the fall," Masson said. "We anticipated that he would be a leading voice in the next generation of moral theologians and we were delighted to have him join our faculty."

Recounting the Jesuit's help to another professor in preparing notes for Chinese students in the class, Masson said Chan had told that professor to give her students the Chinese characters for "Work and study hard!"

"[That] is also a very fitting memorial for himself," Masson said. "We will miss him greatly."

In a brief intellectual autobiography he completed before being appointed to his role at Marquette, Chan recounted how he and Keenan had met as the result of a "beautiful mistake." Meeting for dinner together years ago, Chan wrote that Keenan had thought the younger Jesuit wanted to focus on ecclesiology.

"We both said it was too late to change and we broke into a good laugh!" Chan wrote.

Tying his interests in ethics to his experience growing up in Hong Kong, the Jesuit said, "I have witnessed moral decline and many injustices in our societies."

"These encounters led me to raise various ethical questions and moral reflections," he said. "I realize that one important way to respond to the suffering of people and challenges of the world is through an intellectual formation that calls for awareness of these realities and helps empower the people."

Autiero likened Chan's life and death to a road that comes to an end too soon.

"This leaves me in the good memories of having been able to go the way together, even in the bitterness of knowing that the road itself has been lost with his death," he said.

Pope: Jesus takes on human suffering to draw even closer to people