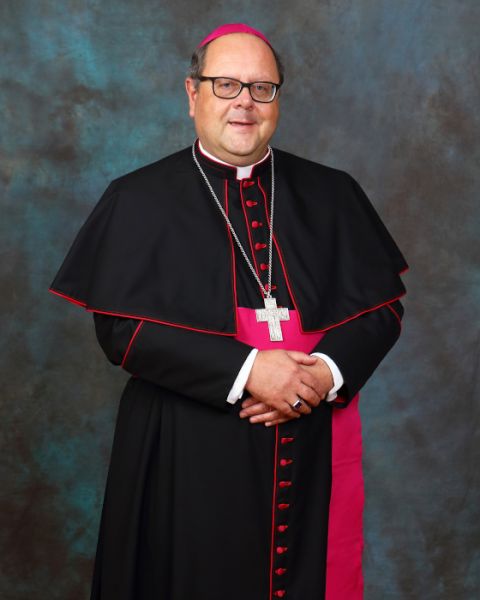 Malesic, 59, has been Greensburg's bishop since 2015. He will be the 12th bishop of Cleveland and succeeds Archbishop Nelson J. Perez, who was named by the pope to be Philadelphia's archbishop Jan. 23.

The appointment was announced July 16 in Washington by Archbishop Christophe Pierre, the Vatican nuncio to the United States.

Malesic will be installed Sept. 14 at the Cathedral of St. John the Evangelist in Cleveland.

The Catholic Church in Ohio "is receiving a true gift from Pope Francis in the person of Bishop Malesic. I know he will serve joyfully as a faithful shepherd and spiritual father," Perez said in a July 16 statement. He added that "it has been a privilege to work with him here in Pennsylvania" since his own appointment to Philadelphia in January.

"The people of the Diocese of Cleveland will always be near to my heart. My service as their shepherd was filled with many happy memories," the archbishop added. " I know they will embrace Bishop Malesic with the same spirit of faithfulness and warmth I experienced during my time there."

He also praised Fr. Donald Oleksiak, who has served as Cleveland's apostolic administrator for the past six months. "He was a great source of wisdom and support for me during my tenure as Cleveland's bishop and I know he will be a valuable asset to Bishop Malesic."

Edward Charles Malesic was born Aug. 14, 1960, in Harrisburg, Pennsylvania, to Joseph A. and the late Elizabeth Schatt Malesic. One of four children, he was raised in Enhaut, Pennsylvania. Two of his siblings are deceased, Joseph Jr. and Margaret R. Malesic. His surviving brother, Robert, lives in Hummelstown, Pennsylvania, with his wife, Constance. His father, at 102, is still quite active and lives near Hershey, Pennsylvania.

He attended Lebanon Valley College in Annville, Pennsylvania, for three years before going to the Pontifical College Josephinum in Columbus, Ohio, where he received a bachelor's degree in 1983 and earned a master of divinity degree in 1987.

He was ordained a priest of the Diocese of Harrisburg May 30, 1987, by then-Bishop William H. Keeler.

When Francis appointed then-Father Malesic to head the Greensburg Diocese April 24, 2015, he had been serving as judicial vicar for the Harrisburg Diocese since 2006 and was pastor of Holy Infant Parish in York Haven, Pennsylvania. He was installed as Greensburg's fifth bishop July 13, 2015.

On June 29, 2017, Bishop Malesic released his first pastoral letter, "A Pastoral Letter on the Drug Abuse Crisis: From Death and Despair to Life and Hope," in response to the opioid epidemic in the region.

In the pastoral, he called on the people of the Greensburg Diocese to take action against the opioid scourge and outlined diocesan and parish efforts focused on prayer, education and cooperative actions with social service agencies already engaged in the fight against addiction.

In response to the clergy abuse crisis and the release of the Pennsylvania grand jury report and in order to increase diocesan transparency and outside oversight, Malesic established a Safe Environment Advisory Council to assist the diocese.

The advisory council oversaw a series of seven listening sessions around the diocese, each of which was attended by Malesic and gave parishioners the opportunity to express their feelings about the grand jury report, make observations and offer suggestions.

The grand jury released its report Aug. 14, 2018, after a monthslong investigation into alleged abuse by clergy and other church workers in the dioceses of Pittsburgh, Allentown, Scranton, Erie, Harrisburg and Greensburg. The report covered a 70-year period starting in 1947.

In February 2019, Malesic announced details of a Comprehensive Reconciliation Initiative, which includes a Survivors' Compensation Program, to support survivors of abuse.

He is a member of two U.S. Conference of Catholic Bishops' committees: the Committee on Canonical Affairs and Church Governance and the Subcommittee for the Church in Central and Eastern Europe.

In other reaction to his new appointment, Harrisburg Bishop Ronald W. Gainer said he has known Malesic for years and has enjoyed "working with him as a brother bishop, and especially in the time we both worked in tribunal ministry. Personally, I have the deepest respect and admiration for him as a priest, bishop, close collaborator and friend."

"We will all miss him as he makes this transition to Cleveland," he said in a July 16 statement, "but Bishop Malesic goes to Cleveland with our deepest support and our continued prayers and friendship in Christ."

Pittsburgh Bishop David A. Zubik said Cleveland's new bishop is "a humble man of God who will guide Catholics closer to Jesus and help to strengthen all communities in his new assignment." He also said Malesic has been an "exceptional pastor to the faithful of the Diocese of Greensburg."

"He and I have worked together closely and often on many issues of the church in southwestern Pennsylvania," Zubik added. " Bishop Malesic has shown what it means to be a servant leader in the Diocese of Greensburg, giving wise and gentle guidance in difficult times and especially in his outreach to people devastated by opioid addiction. I will miss my friend and co-worker in the vineyard."

(This article has been updated with new information on July 20, 2 pm ET)