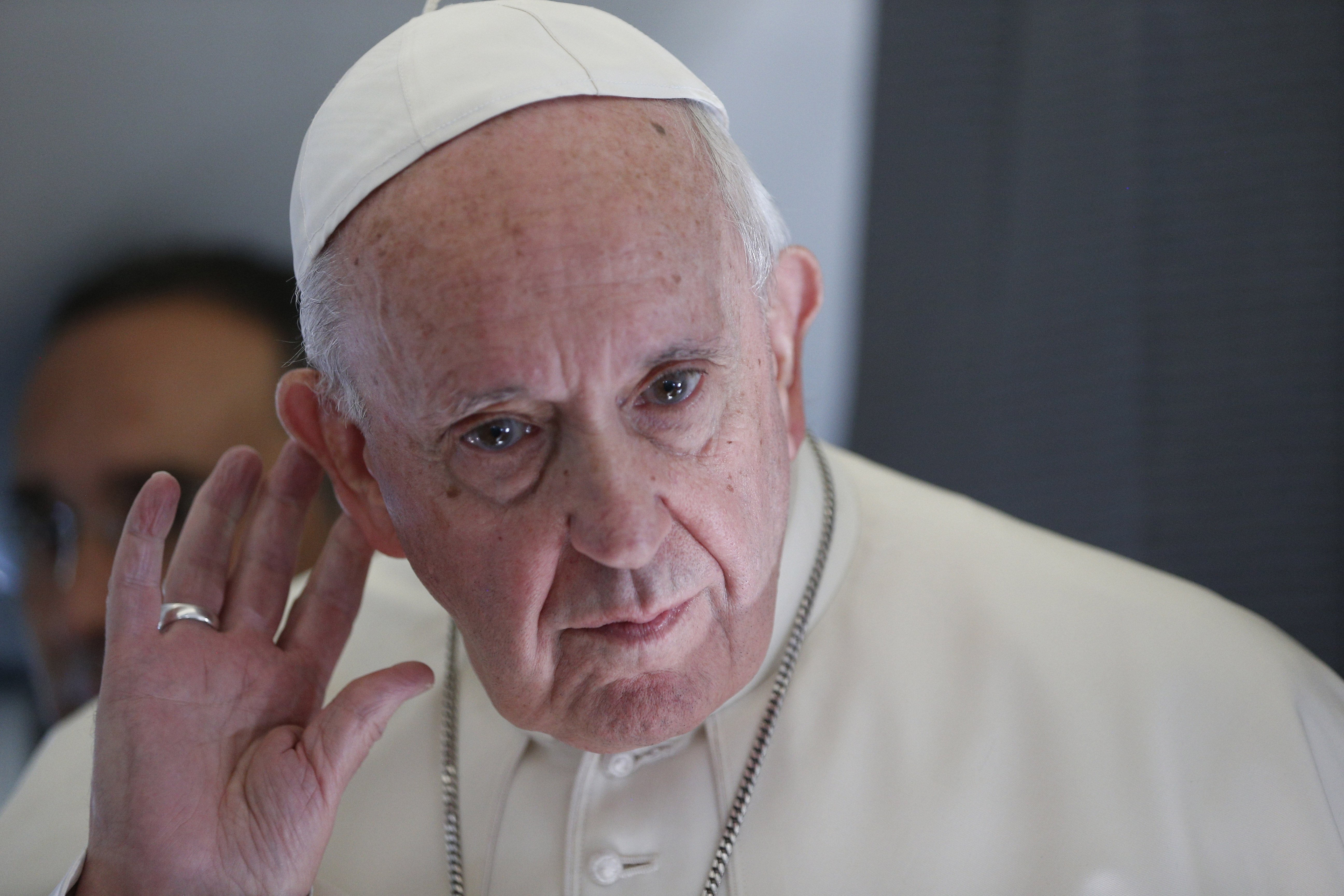 Pope Francis listens to a question while responding to journalists aboard his flight from Tallinn, Estonia, to Rome Sept. 25, 2018. (CNS/Paul Haring)

VATICAN CITY — Listening to others is the first essential ingredient of good communication and a condition of genuine dialogue, Pope Francis said.

"Communication does not take place if listening has not taken place, and there is no good journalism without the ability to listen," he said in his message for World Communications Day.

"In order to provide solid, balanced and complete information, it is necessary to listen for a long time," he said. "To recount an event or describe an experience in news reporting, it is essential to know how to listen, to be ready to change one's mind, to modify one's initial assumptions."

"Listening with the ear of the heart" is the theme of this year's World Communications Day, which most dioceses will mark May 29, the Sunday before Pentecost. The message was released Jan. 24, the feast of St. Francis de Sales, the patron saint of journalists.

Listening, the pope said, is essential for communication and genuine dialogue.

However, "we are losing the ability to listen to those in front of us, both in the normal course of everyday relationships and when debating the most important issues of civil life," he said.

In public life, he said, "instead of listening to each other, we often 'talk past one another,'" which is a symptom of seeking consensus rather than "the true and the good" and of paying more attention to the audience than listening to the person before oneself.

"Good communication, instead, does not try to impress the public with a sound bite, with the aim of ridiculing the other person, but pays attention to the reasons of the other person and tries to grasp the complexity of reality," he said.

"It is sad when, even in the church, ideological alignments are formed and listening disappears, leaving sterile opposition in its wake," he added.

People must set aside the "monologues" and listen to several sources to ensure "the reliability and seriousness of the information we transmit," he said.

"Listening to several voices, listening to each other, even in the church, among brothers and sisters, allows us to exercise the art of discernment, which always appears as the ability to orient ourselves in a symphony of voices," he said.

Listening can be arduous, especially with "difficult parties" in difficult conditions, he said, but this "martyrdom of patience" is needed to listen and be heard in negotiations and "obtain the greatest possible good in conditions of limited freedom."

"Even in less difficult situations, listening always requires the virtue of patience, together with the ability to allow oneself to be surprised by the truth, even if only a fragment of truth, in the person we are listening to," the pope said. There is always something to learn from others.

Being able to listen is more important than ever "in this time, wounded by the long pandemic," he said.

So much mistrust has been built up against "official information," causing an "infodemic" in which "information is increasingly struggling to be credible and transparent," Pope Francis said.

In response, he said, one must listen carefully to people, "especially to the social unease heightened by the downturn or cessation of many economic activities."

The world of forced migration is another place people and journalists must listen, he said, encouraging reporters to cover this complex reality and help "melt the hardness" of prejudiced hearts by giving migrants a name, a face and telling their stories.

"Many good journalists already do this," he said. "And many others would like to do it, if only they could. Let us encourage them! Let us listen to these stories!"

Once people understand migrants are human beings and "not numbers, not dangerous invaders," then they will be more "free to support the migration policies they deem most appropriate for their own country," he said.

Pope Francis also said the synodal process underway in the church will be "a great opportunity to listen to one another. Communion, in fact, is not the result of strategies and programs, but is built in mutual listening between brothers and sisters."

As the Protestant theologian, Dietrich Bonhoeffer, said, "Whoever does not know how to listen to his brother or sister will soon no longer be able to listen to God either," the pope said.