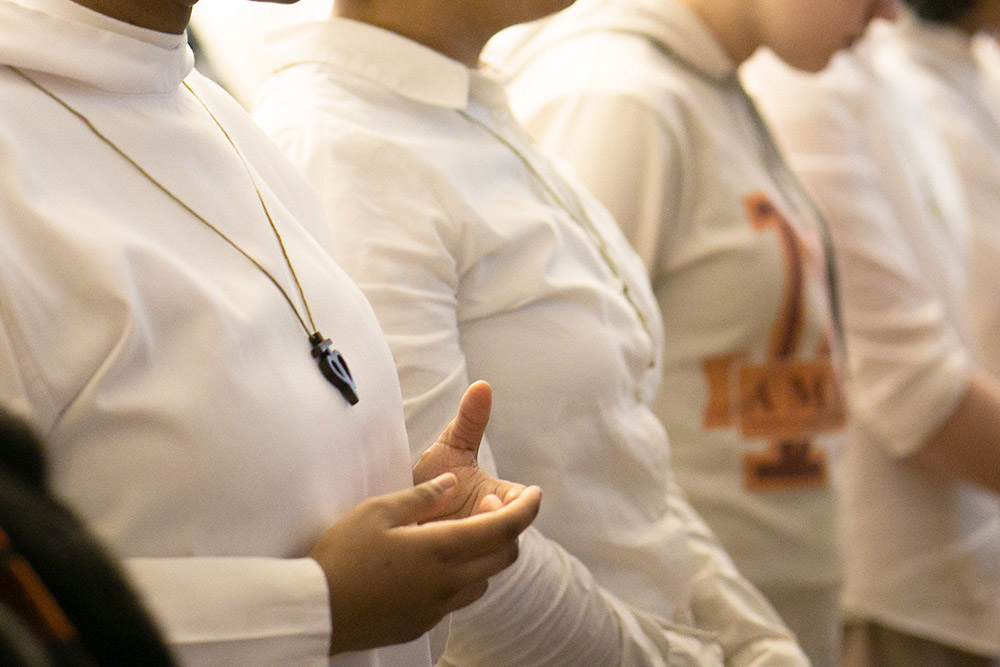 Members of the Famille Marie-Jeunesse are pictured during Mass in Notre-Dame-de-Foy's Church in Quebec City Jan. 31, 2017. (CNS/Présence/Philippe Vaillancourt)

A Quebec Superior Court judge authorized a class action against a Catholic religious group once heralded for its ability to foster vocations. The decision opens the way for people who claim to have been physically, spiritually or psychologically abused within the organization to join the legal case.

Judge Alicia Soldevila decided in favor of class action involving Famille Marie-Jeunesse (Family of Mary's Youth), which was founded in the 1980s.

Pascal Perron, a member of the group for 17 years, will represent those who join the class action. He left the religious community in 2014, at age 36, after having lived in the group's community houses in Quebec and on Reunion Island, a French department in the Indian Ocean.

Perron blames the group and its leaders for putting in place rules that were "so strict and rigorous" that they had the effect of "destroying the identity of the individuals who were part of it," preventing their development, and making "their reintegration into civil society extremely difficult."

He also claimed to be a victim of spiritual abuse, which an expert defined as the use of a person's spiritual need "for the purpose of manipulating and controlling him or her for bad purposes," Soldevila's ruling explained. In the case of Perron, the abuse resulted in "a loss of faith," the judge wrote.

Fr. Réal Lavoie, identified as the group's founder and who was ordained in 2005, was mentioned several times in Soldevila's Sept. 13 ruling. The priest is accused of having "developed and implemented a closed system or sectarian scheme that had the effect of making the members of the group completely vulnerable and enslaved to its leaders and to the sect," it said.

In her 39-page judgment, Soldevila concluded that it is inappropriate to evaluate the rules regarding membership in a religious community. The ruling determined, however, that a future trial will examine whether a system existed "that deprived the plaintiff of his freedom to choose freely to join the community," kept him for 17 years against his will and did not provide assistance for reintegrating into civil society.

The congregation also has external members who live outside of community houses. A third category of members are priests who come under "the competent ecclesiastical authority," the judge wrote, and thus are outside the community.

The group currently has 21 members living at its home in Sherbrooke, explained Fr. Jean-François Pouliot, the congregation's spokesperson. However, an unspecified number of members live outside the community, he said.

During the hearings in February to obtain authorization for the class action, it was mentioned that since its founding Famille Marie-Jeunesse has counted "more than a hundred members" who would have pronounced "final commitments," notably in Quebec and Belgium.

In February 2019, an unknown number of members with "temporary or definitive commitments," whose departures from the congregation "may have been more painful," were invited by the Sherbrooke Archdiocese for "support and mediation."

In 2002, the archdiocese recognized the group as a "new community type" public association of the faithful, and because of that decision the archdiocese has been named as a plaintiff in the case. The court will have to decide if the archdiocesan authorities took "reasonable measures to put an end to the abuses" that the victims reported to them or if they "knowingly and consciously chose to ignore said abuses," the ruling said.

"I am very pleased with the judgment," said Jean-Daniel Quessy, Perron's lawyer. "The courts are sending a strong message. That the victims in the Marie-Jeunesse case have a defensible case and that they are right to move forward."

Regarding Soldevila's determination about the rules that religious groups can adopt, Quessy said it is not his intention to "put the group's rules on trial."

"Rather, we are looking at this from the perspective of spiritual abuse. How are the rules applied and lived in the day to day? We feel that rules have caused damage and are wrong. To us, that's abuse," Quessy said.

Eliane Thibault, archdiocesan spokesperson, said that "while the court accepts favorably the plaintiffs' request at this stage of the proceedings, the Archdiocese of Sherbrooke intends to maintain its efforts to collaborate with the justice system and to ensure its defense in the next stages of the case."

"Abuse of any kind is unacceptable," she said. "Through this judicial process, we hope that the alleged victims can find peace and that these people can live a life that meets their expectations."

The religious organization continued to review the ruling and was considering what steps to take, said Pouliot.