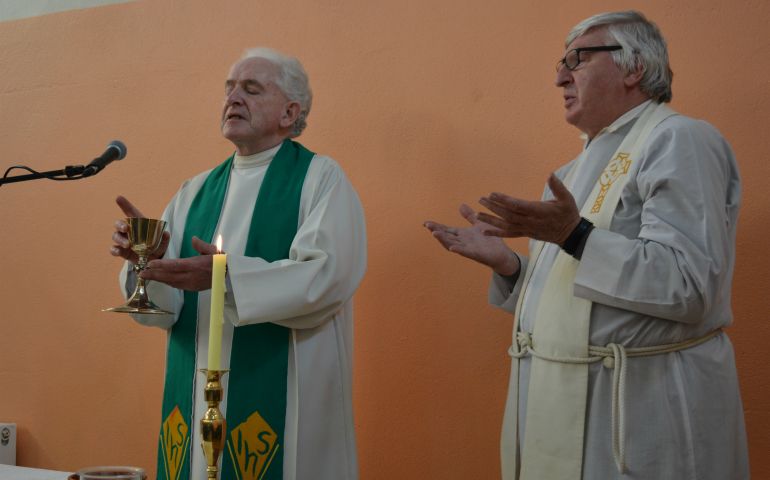 Dublin — Redemptorist Fr. Tony Flannery has said he is not anticipating any backlash from the Vatican over his celebration of a public Mass last Sunday in contravention of a ban on public ministry imposed on him by the Congregation for the Doctrine of Faith.

The 70-year-old Irish missioner described the liturgy, which was attended by up to 800 people, as "emotional and beautiful."

"I have celebrated many big Masses over the years, at missions and novenas, but nothing that touched me to the core like this one." He added that the occasion "would come close to being the loveliest day of my life."

Flannery, who is a co-founder of the reform-minded Association of Catholic Priests, said he was "not worried about excommunication" by the church and didn't "anticipate" any excommunication under Pope Francis and "even less so in the context of Pope Francis' visit to Ireland next year."

Referring to the "volume of support and encouragement from people" at the Mass and those who had contacted him by email, letter and telephone, the priest said that for church authorities to do anything to him now would be "shooting themselves in the foot."

He regarded excommunication as a medieval concept and said it "wouldn't influence me or my life or my faith in any way," he told NCR.

Those who attended the Mass at a community center in Flannery's rural home village of Killimordaly in County Galway on Sunday afternoon were local friends, supporters of the priest, members of reform groups such as the Association of Catholics in Ireland and We Are Church Ireland. Some attendees had traveled from overseas to be there.

The strictures imposed on Flannery, which include forbidding him to minister publicly, relate to his liberal views on women priests, the Eucharist and the church's sexual teachings.

In 2013, through his Redemptorist superiors, the Congregation for the Doctrine of Faith made it known that he would only be allowed to return to ministry if he signed and published a statement assenting to the church's teaching that women should never be ordained as priests and that he would adhere to the magisterium on issues such as contraception and homosexuality.

Refusing to agree to the doctrinal congregation's terms, Flannery remains unable to publicly exercise his ministry while a resolution to the impasse looks a long way off.

A marquee outside the community hall on Sunday facilitated the overspill crowds who turned up in solidarity with the cleric on a bright, crisp January afternoon. The Mass was concelebrated by Fr. Willie Cummins from County Clare.

Writing in his blog on Monday, Flannery said he had decided beforehand that the Mass was going to be a celebration, "so I would have no negativity, rancor, complaining or criticizing. And, on the day, I stayed strictly to that."

In his homily, he only made a passing reference to the Vatican. He began by telling the congregation that what he wanted to say was something simple and that he hoped he could find the words to say it.

Noting the diversity of those who had come to the service, he observed that they were people with very varied views on faith, on God and on the meaning of life itself.

Recalling how in pre-Vatican II rural Ireland, Mass was a matter of priests standing with their backs to the people saying the words in Latin, he said the congregations then were "largely spectators" and that the real event happened on the altar. "The priests communing with God in a foreign language and through their power, as priests, bringing God present into the community — that was the work of the priest."

Acknowledging he still believed that at the words of consecration Jesus becomes present in the bread and wine, he also stressed that this was not the only presence of Jesus and God among us.

"He or She or whatever pronoun you want to use is just as powerfully present in this gathering, in the whole lot of us and in each of us individually. We have a new understanding of Mass and the Eucharist and it isn't just the work of the priests — it is the work of the believing community."

Addressing the crisis around priesthood and the concerns about who will be left to celebrate Mass in 10 or 20 years' time, he said, "It is time the believing communities once again took possession of the Eucharist. That is how it began after the time of Jesus; the believing communities gathered in their houses and they celebrated the Eucharist. Then as time went on, the centralized power took it over and laid down all sorts of regulations and rules about where it could be and who could say it."

"That now is breaking down very rapidly and if we are to preserve what is very precious – the Christian message — we need to recover, as communities, the Eucharist for ourselves."

The congregation gave the priest a standing ovation at the end of his homily, and all were invited to Communion, irrespective of whether they were regular Mass-goers or not, as a statement of love towards one another.

Among those who attended the Mass was Marie Morrissey from Loughrea, who is affiliated with the reform group, the Association of Catholics in Ireland.

She told NCR that the large attendance was an indication of the level of support for Flannery and his objectives.

"I think it conveys a very strong message of support for Fr. Tony Flannery and others who have been silenced, particularly in this country. The church authorities need to address that and try and bring them back into ministry."

Columban Fr. Sean McDonagh, who along with Flannery, co-founded the Association of Catholic Priests, attended the Mass with another co-founder, Fr. Brendan Hoban.

Speaking to NCR, McDonagh described the Mass as a "great celebration" for Flannery. "He has been five years out of ministry for reasons that he shouldn't have been; it has been a very difficult journey for him."

Paying tribute to the people who turned up in solidarity, he added, "Would that some of the leaders of the church would show some of the same concern for people in ministry."

He was critical of the way the Redemptorist priest's case was being allowed to drift by the Vatican. "His case has just been left in the halls of the Congregation for the Doctrine of the Faith; there is no resolution being brought to it. The church's processes don't actually work. We should be thoroughly ashamed of ourselves," he said and suggested that the processes of the Congregation for the Doctrine of Faith were "much more in line with the church of the 19th century when it was the inquisition." (Before 1908, the official title of the congregation was the Supreme Sacred Congregation of the Roman and Universal Inquisition.)

Referring to the Redemptorist's efforts to highlight the issue of the role of women in the church, McDonagh commented, "We have had three popes talking about the role of women in the church but they didn't do anything about it. Pope Francis is the first man who has said he is going to look at the diaconate. The reality is that in the future the church has to have men and women equally recognized. As Galatians says, there is no distinction between male and female."

Referring to early church writers such as Sts. Jerome and Augustine, he commented, "The church itself has had a horrendous misogynistic history."

Lining up to greet Flannery at the end of Mass were Shirley Griffin and her son Jack from Athenry, County Galway. She explained to NCR that Flannery had married her and her husband and had baptized her 8-year-old son. The link goes back even further. "I was the first child that Father Tony blessed when he was ordained."

Asked what she thought the Vatican would make of the liturgy, she responded, "I think if they saw the amount of people here it would inspire them. People have turned up of their own free will and made time out of their normal daily routine to be here."

"I believe Father Tony's message is to be Christian to one another and it is about being kind and accepting of people's uniqueness. I would love for the sanctions to be eased on him because he deserves it. He is a man of the people and he has a gift."

Bishop: Irish hierarchy should reach out to priests like Fr. Tony Flannery