Retired Auxiliary Bishop Moses B. Anderson of Detroit dies at 84 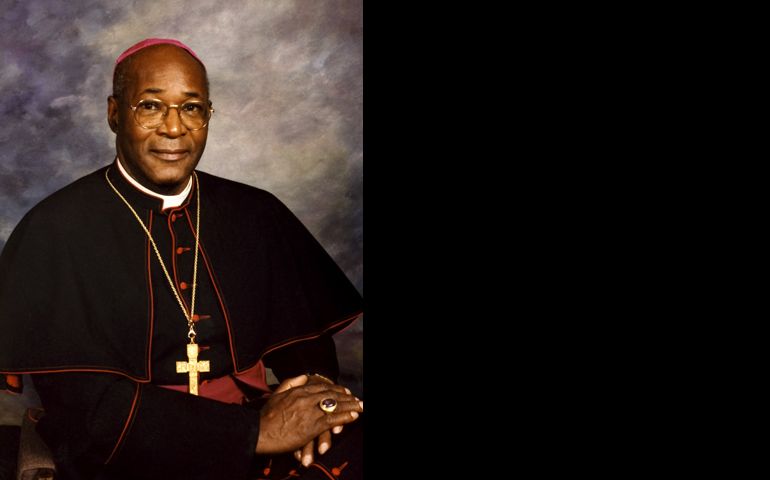 Livonia, Mich. — A funeral Mass is scheduled for Monday at the Cathedral of the Most Blessed Sacrament in Detroit for retired Auxiliary Bishop Moses B. Anderson, who died Tuesday in the Detroit suburb of Livonia, where he had been living in his retirement. He was 84.

A statement Wednesday from the Archdiocese of Detroit said Anderson died of cardiac arrest.

The week after his retirement, Anderson flew to Ghana, where he traces his ancestry, to deliver a previously scheduled series of lectures on inculturation.

In 1990, during a trip to Ghana, he was given a new title and "enstooled," so called because of the stool on which such dignitaries sit, as Kwasi, Aduanahene of Antoa -- which means Sunday, tribal chief of the Aduana, his ancestral clan, of the village of Antoa. The honor was given in appreciation of his work in Detroit to send development supplies to the village.

At the time, Anderson told Catholic News Service that the honor, bestowed with elaborate ceremonies, was "a cultural thing that has no political power attached." But he said it meant a lot to him because "ever since 1949 I have called myself Ghanaian-American."

It was that same year that Anderson became a Catholic. Two years later, he began studying for the priesthood.

In 1984, Anderson participated in writing "What We Have Seen and Heard," the first joint pastoral letter by the country's black bishops, on the topic of evangelization. It called on African-American Catholics "to reclaim our roots and to shoulder the responsibilities of being both black and Catholic."

In one of his first major speeches as a bishop, as keynoter for the 1983 Shepherds Speak series at St. James Cathedral in Brooklyn, N.Y., he warned that the United States was "going backwards" on race relations after years of improvement. He lauded the efforts of the church, especially his fellow bishops, to speak out against racism and resist it.

From 1992 to 2001, Anderson doubled as pastor of Precious Blood Parish, a predominantly black parish in Detroit. In 1992, he said the acquittals of police in the Rodney King beating trial did not "bode well for the country." He added he had tried to evangelize his parishioners along peace and justice themes, but "we're running into all kinds of difficulties because of incidents like this."

At a 1995 conference near Washington on pastoring black parishes, Anderson remarked, "Some say the parish will not survive because of the lack of priests, the lack of religious, the lack of deacons, or the lack of lay ministers. Some say the lack of good relations between the clergy, religious and lay ministers threaten the survival of the parish. ... They may threaten the survival of a particular parish but not the church. We must evangelize in such a manner that we live and preach the staying power of both the universal church and the local ecclesial community."

Following a 2004 ad limina visit with Blessed John Paul II, Anderson remarked that whenever he is in Rome, he makes a point to attend the audience "just to be with the Holy Father as much as possible." He added, "It's awesome to stand right beside him and bless all those people."

Rep. Elijah Cummings was an example of public faith in a time of religious skepticism

Finding self through service: The experience of long-term volunteers