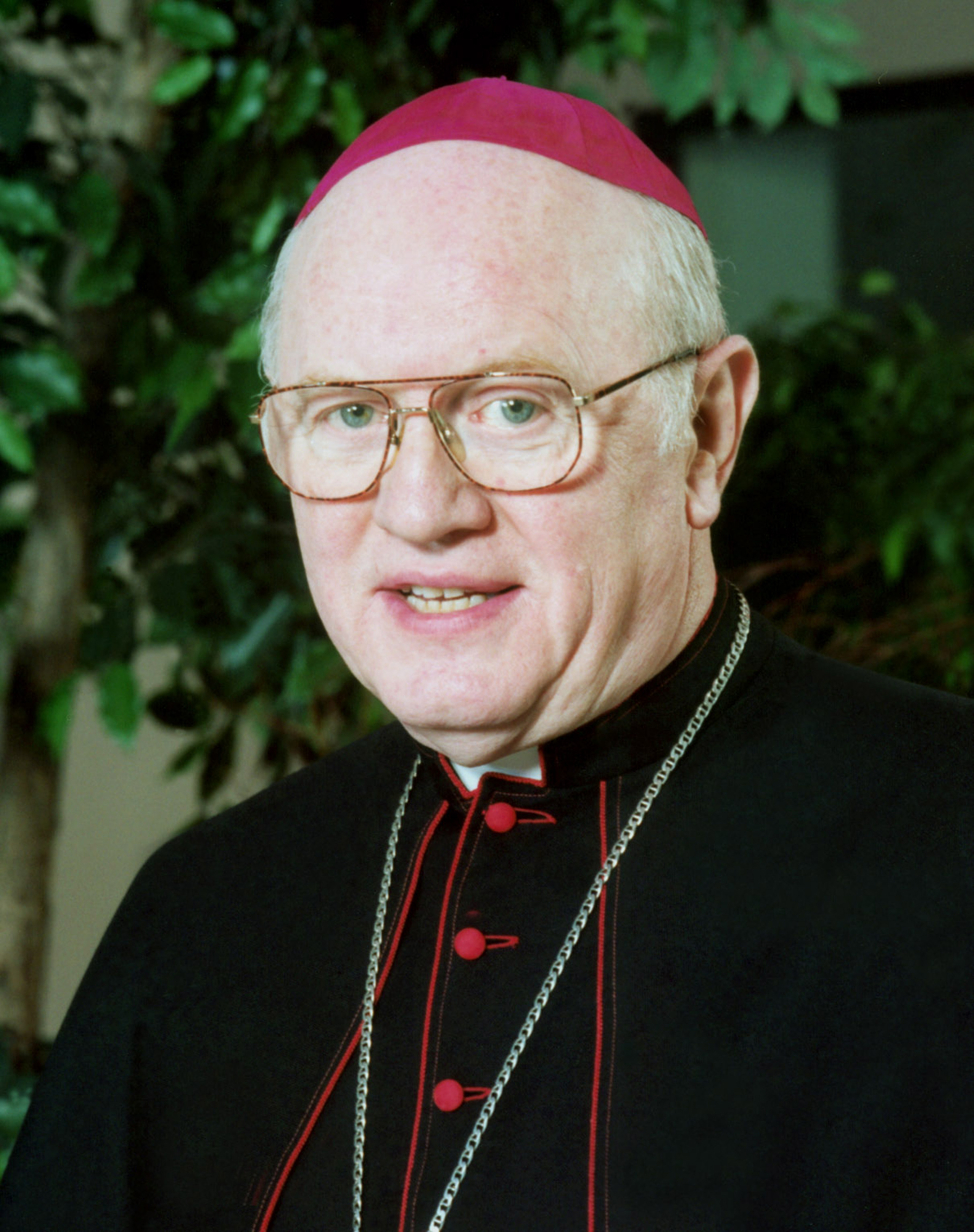 Retired Bishop Raymond J. Boland of Kansas City-St. Joseph died Feb. 27 in Cork, Ireland, in a hospice facility surrounded by his family. He was 82.

A funeral Mass will be celebrated March 4 in Ireland.

Bishop Robert W. Finn, who succeeded Boland as head of the Missouri diocese in 2005, said the retired prelate had returned to Ireland from Kansas City with his brother, retired Bishop J. Kevin Boland of Savannah, Ga., Feb. 22 "to fulfill his wish to be buried in his native country."

"We thank Almighty God for the grace filled ministry of Bishop Boland, and the warmth and goodness that we have experienced in knowing him," Finn said in a message posted on the diocese's website.

He said a local group planned to travel to Ireland for the funeral and the diocese will celebrate a memorial Mass for Boland at a later date. The bishop encouraged parishes to say Masses for the late prelate and he urged Catholics to remember him in their parish intentions and personal prayers.

"When I was appointed almost 10 years ago, Bishop Boland welcomed me warmly. I quickly came to know him as a good priest, and joyful bishop, who was highly organized, and very fraternal," Bishop Finn said. "He had lots of stories and a great love for the church."

Born Feb. 8, 1932, in County Tipperary, Ireland, and raised in County Cork, Boland had been one of 31 active foreign-born U.S. bishops, including eight from Ireland. His brother Kevin was ordained a priest of the Diocese of Savannah and was the bishop there from 1995-2011. Two other brothers remained in Ireland.

Educated at Christian Brothers College in Cork, the National University of Ireland in Dublin and All Hallows Missionary College in Drumcondra, Boland was ordained a priest of the Archdiocese of Washington June 16, 1957.

In Washington, he led three parishes and held archdiocesan posts, including secretary for Catholic education, chancellor, vicar general and moderator of the curia. He coordinated Blessed John Paul II's 1979 visit to Washington.

His national appointments included serving as chairman of the bishops' Committee on Communications, a consultant to the Committee on Pro-Life Activities and episcopal moderator of the National Catholic Risk Retention Group, which helped develop the "Protecting God's Children" education program about child sexual abuse.

When he retired in May 2005, he was 73 years old, two years shy of the age at which canon law requires bishops to turn in their resignation to the pope.

According to a Catholic News Service story, Boland did not specify why he was retiring two years early, but he said, "A diocese is not well served by a bishop whose energy is compromised by ailments too boring to enumerate."

An obituary on the bishop in The Catholic Key, newspaper of the Kansas City-St. Joseph Diocese, said Bishop Boland was a survivor of one cancer operation and suffered from a blood disorder that affected his stamina.

When he retired, he said he had "enjoyed almost every moment of it."

"Some dreams were not fulfilled, but in 12 years I have witnessed many magnificent accomplishments crafted by the dedicated and hardworking priests, religious and laypeople whom it has been my privilege to lead and to serve," he added.

His retirement plans included seeing "grandnieces and grandnephews whom I have yet to meet" and visiting "long-neglected friends."

"And there are poems to be read, sunsets to be savored, hobbies to be rekindled and maybe the Grand Canyon to be seen," he added. "These matter less than the conviction that the twilight of our lives is really our advent to the endless grandeur of God."

Finn in his statement praised his predecessor for having "a great missionary spirit" that brought him from Ireland to serve the U.S. Catholic Church.

"We were different, of course, but he always supported me and encouraged me. He laid a wonderful groundwork for me here in the diocese, and often was ready to share a story from his experience," Finn said. "I enjoyed him and said on more than one occasion that it would be better (easier) to follow a man who was not so capable and well loved.

"But on the other hand, his love paved the way for many priests, lay faithful and others -- even me! -- to persevere in following Christ."

The Catholic Key quoted from a Sept. 3, 2001, document that Bishop Boland called "My Personal Funeral Arrangements."

"It is obvious that God has blessed me in many ways," he wrote. "For that reason, I would hope that my passing will not bring sorrow or pain to others because I will be sharing the happiness promised by the Lord of compassion and love."

He prayed "the God of mercy will be waiting to welcome me home."