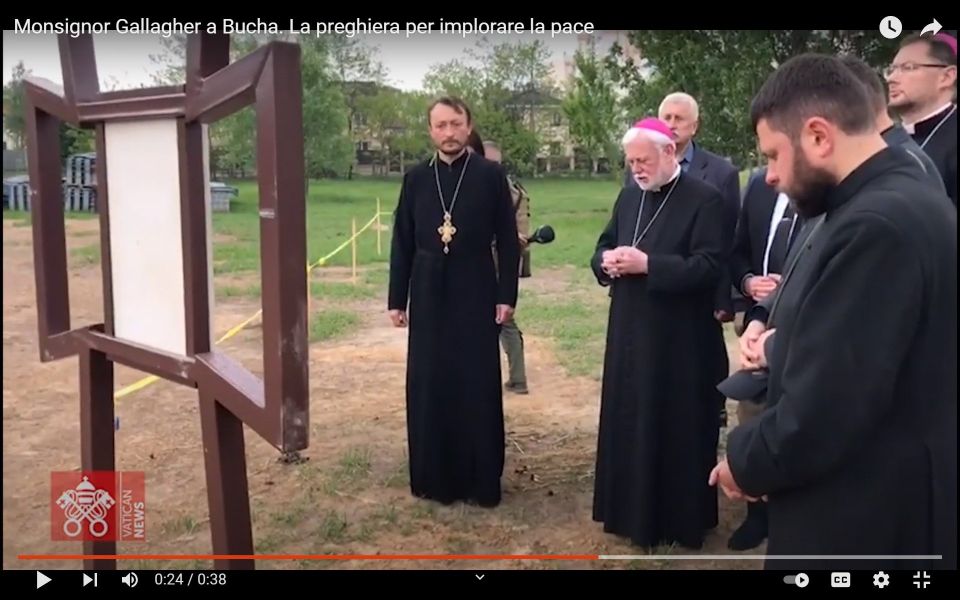 Archbishop Paul R. Gallagher, Vatican foreign minister, prays at the site of a mass grave near the Orthodox Church of St. Andrew in Bucha, Ukraine, May 20, 2022, in this still image taken from video posted by the Vatican. (CNS photo/Vatican Media)

WARSAW, Poland — The president of the Polish bishops' conference criticized the Vatican's "naive and utopian" attitude to the war in Ukraine and urged Rome to show "greater maturity" in attitudes toward Russia.

Returning from a visit to Ukraine, Polish Archbishop Stanislaw Gadecki acknowledged that the Vatican knew Christians were fighting on both sides of the war, and the Vatican normally does not point to an aggressor.

"Yet today, in a situation of war, it's crucially important the Holy See supports Ukraine at all levels and isn't guided by utopian thoughts," Archbishop Gadecki told the Polish Catholic Information Agency KAI May 23.

Archbishop Gadecki told KAI that he had written Pope Francis, urging him to revise his approach to the war, adding that he feared Vatican diplomacy was returning to its "old direction," focusing on ties with Russia at the expense of Eastern and Central Europe.

"The Vatican's attitude to Russia should be changed and made more mature, since the old and present approach seems extremely naive and utopian," said the Polish archbishop, whose country has taken in 3.41 million Ukrainian refugees since Russia's Feb. 24 invasion.

He told KAI Vatican diplomacy had achieved little in the 1970s to help communist-ruled countries until a "radical change" in policy under St. John Paul II.

Archbishops Gadecki, Wojciech Polak of Gniezno and Stanislaw Budzik of Lublin visited Ukraine May 17-20. The visit overlapped with one by Archbishop Paul R. Gallagher, Vatican foreign minister, who was in Ukraine May 18-20.

Archbishop Gadecki told KAI the Polish delegation had seen buildings destroyed by Russian tank fire outside the massacre towns of Irpin and Bucha, near Kyiv. He said he had witnessed similar destruction during visits to Iraq and Syria and said the mass graves reminded him of Russia's 1940 massacre of interned Polish army officers at Katyn.

"When I prayed at places where dead people on the proscribed lists were buried and later exhumed, I had the sad thought that human civilization isn't really making any progress," Archbishop Gadecki said.

"We've heard so many declarations and incantations over recent decades about such crimes no longer being possible given the present level of civilization, but murdering people has turned out to be just as possible as before ... As soon as a political leader appears with strength and determination to destroy his opponents, he'll do so, and no one can stop him."

Missionary nun's cause moves on to Rome