'Reverts' return to their childhood faith 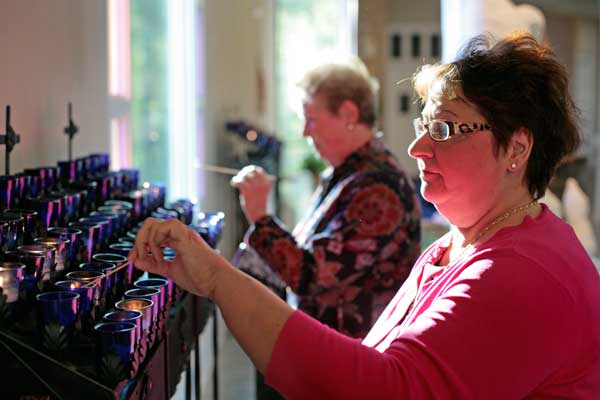 Bruce Boling was set to celebrate Easter Sunday among Southern Baptists, just as he did when he prayed at a tiny Kentucky church where his family filled half the pews.

After decades away from faith, "I slowly began to see what I was missing was the relationship with God that I could find in my church," said Boling, 45, who has settled in with a little Baptist congregation in Hendersonville, Tenn.

Lydia Scrafano's heart will again thrill to hear Catholic hymns sounding on a great pipe organ, just as she did as a child in Detroit.

"I missed it all. I missed taking Communion with a priest. I missed the stained glass. I missed the Virgin Mary," says Scrafano, 55, who has reconnected with her faith through a Catholic church in Williamsburg, Va.

Like many Christians and Jews, Boling and Scrafano drifted -- or marched -- away from the religion of their childhood. Then, unlike most, they came back.

And they came back to stay, not just to parachute in for the Easter service or a Passover seder.

According to the Pew Forum on Religion & Public Life, more than half of Americans say they've switched religions at least once, but just 9 percent of U.S. adults say they've returned to the pews, practices and prayers that shaped them.

They're not converts; they're reverts. And religious denominations are stepping up efforts to reclaim, re-energize -- and sometimes re-educate -- these fallen-away faithful.

Catholic churches are adding adult programs to focus on returnees who often fear their actions or choices will keep them from the sacraments, the essential rites of Catholicism. Evangelical churches steer reverts to Bible study groups to help them establish stronger religious roots.

Rabbis reach out to young adults through a program called "Next Dor" (dor is Hebrew for generation). It's promoted by Synagogue 3000, a consortium of leaders from Reform and Conservative movements, the two largest branches of Judaism in the U.S.

Several Catholic dioceses have reported post-Christmas or post-Easter attendance bumps after major advertising efforts, such as a "Catholics Come Home" media campaign launched in Phoenix in 2008.

The Archdiocese of Washington pushed to increase confessions during Lent (the 40 days preceding Easter) by opening church and chapel doors on Wednesday evenings. Their advertising slogan: "The Light is ON for You." Within five years, the campaign spread across the country as more bishops adapted the idea for their dioceses.

But are they staying?

It's not clear if these coaxed-back Catholics stick around, said Mark Gray, a political scientist with Georgetown University's Center for Applied Research in the Apostolate, which collects and studies statistics related to the Catholic church.

Gray said some must be back for the long haul because the Catholic share of the U.S. population has held steady at about 25 percent for several years.

"There is not enough immigration to keep it at that if our 'leavers' estimates are correct. Some must be 'coming home.' The match just does not work otherwise," Gray said.

At St. Bede's, a Catholic megachurch of 3,700 families in Williamsburg, Va., Deacon Dominic Cerrato leads a seven-week "Welcome Home" class designed to answer the questions and calm the concerns that kept lapsed believers from church. More than that, the course seeks to draw them into parish life, not just "punching your ticket at Mass," as he put it.

St. Bede's was just awarded a grant from Our Sunday Visitor Institute, a Huntington, Ind.-based foundation that supports Catholic education and evangelizing. The church will use the money to produce a multimedia DVD package on its program, so other parishes around the country can emulate it.

The class stresses the joy of following Catholic doctrine. Some of those teachings -- on morality, marriage, sexuality and other thorny topics -- may have been confusing or difficult for adults who last studied Catholicism when they were children.

"We take a very personal, nonjudgmental approach, without ever undercutting church teachings," Cerrato said. "We put things in context of real life."

About 250 people have participated in the classes, about 95 percent of which have gone to the Sacrament of Reconciliation, as confession is now called. Often -- as Scrafano can attest -- they emerge with tears of joy and relief.

Scrafano said her mother led her out of Catholicism to an evangelical Bible church years ago. She married a deacon in a nondenominational Christian congregation. "But it never felt right. It never felt the same," said Scrafano, now divorced. Ten years later, while driving around for her job selling produce to area restaurants, Scrafano spotted a "Welcome Home" banner promoting the class at St. Bede's.

"Three weeks into the class, my mom started coming with me. Now she's back to the Catholic church," said Scrafano, who is sure she's home to stay.

Synagogue 3000 is looking for similar results. Its research on synagogue life found 70 percent of young Jews are either not affiliated or not engaged with their religion. "And they're not coming back in significant numbers when they have children," said CEO Rabbi Aaron Spiegel.

Rabbi Esther Lederman of Temple Micah in Washington finds 20- and 30-something Jews who are curious about exploring meaning in Jewish terms and engaging more in religious practice.

Through enhanced programs and lower initial membership fees in 2009, Temple Micah has seen young adult membership jump from three to 30 in a year. Free services for the autumn High Holy Days -- when members typically donate their annual support to the synagogue -- prompted a surge of 350 people attending the evening worship for Rosh Hashanah and Yom Kippur in 2010 and 2011.

One is Jocelyn Roberts. Roberts' mother is the daughter of a rabbi, and her father is an atheist ex-Catholic. As a child, Roberts never attended synagogue or church. Yet Roberts, 36, fondly recalled the family lighting Hanukkah candles and singing together.

After doing graduate work in Asian studies -- learning about Hinduism, Shintoism and many kinds of Buddhism -- "I came home and found myself more curious about Judaism. I felt like I was Jewish, but I didn't know what being Jewish meant," she said.

She found Next Dor while living in Seattle and began attending synagogue there. After moving to Washington, D.C., for a job as a consultant, Roberts joined Temple Micah's class for adults who want a Bat or Bar Mitzvah, a life cycle event traditionally marked by a 13-year-old girl or boy. 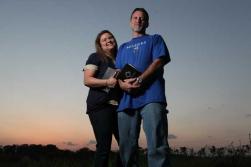 Bruce Boling was driven away from his family's small-town Southern Baptist church by his mother's insistence that he go every Sunday. "Once I grew up and didn't have to go anymore, I just quit," he said.

Years of moving between cities and careers didn't give him any incentive to return, said Boling, a project manager for a contracting company.

His wife, Elizabeth, is Catholic, and though a priest married them, he never converted. The birth of their two children prompted him to rethink his choices.

"I thought if I went back, it would make me a better father," Boling said. "What I found was it made me a better me."

Now, the Bolings worship on Sunday mornings at Grace Baptist Church in Hendersonville, Tenn. On Sunday nights, they delve into Bible study in a small church group.

His Bible once belonged to his late grandfather. After he'd returned to church and stuck with it for six months, he says, "my mother mailed it to me for my Christmas present."

How evangelicals teamed up with the White House on prison reform