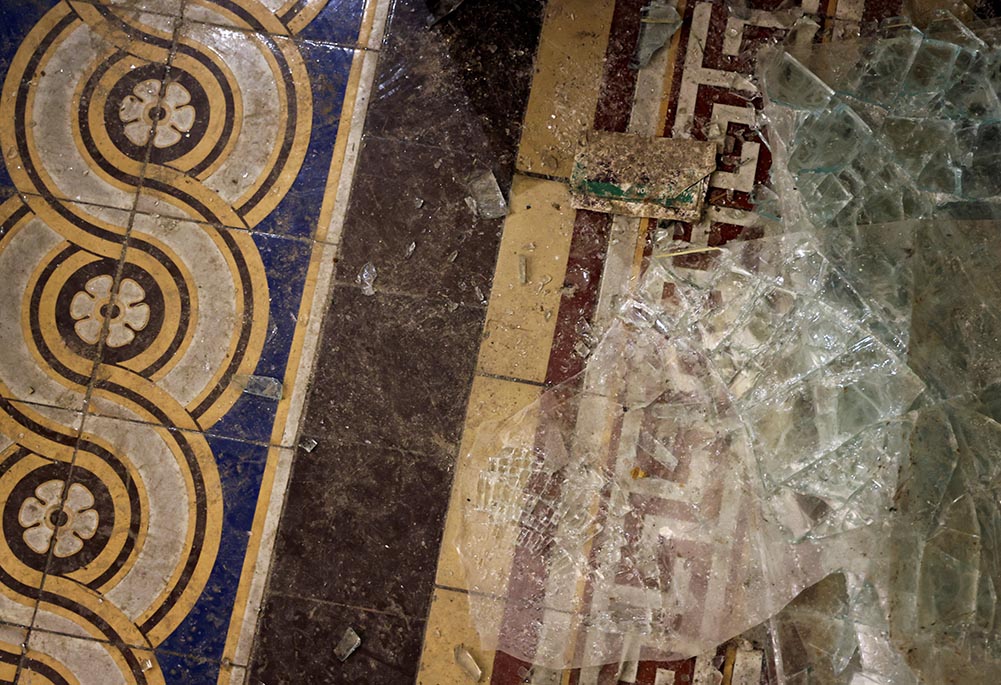 Broken glass is seen on the floor of the U.S. Capitol in Washington Jan. 7, 2021, after supporters of then-President Donald Trump occupied the building the previous day. (CNS/Reuters/Jonathan Ernst)

An organization that provided hefty sums of money to nonprofits that spread misinformation about the 2020 presidential election and organized the Jan. 6, 2021, attack at the U.S. Capitol building has also funneled millions of dollars in anonymous donations to right-wing Catholic nonprofits and official Catholic groups.

The organization, known as Donors Trust, has been described as a "dark money ATM" for the political right and has provided funding to groups linked to white supremacist and anti-democratic elements, as the Daily Beast reported on Nov. 22.

"This is really dark, scary money connected with some of the most radicalized extremists on the right. It's really just appalling," said Stephen Schneck, a national Catholic political activist who recently retired as executive director of the Franciscan Action Network.

Included in those receiving funds were the Diocese of Spokane, Washington; the Thomas More Society; the Acton Institute; and the San Francisco Archdiocese's Benedict XVI Institute for Sacred Music and Divine Worship.

In total, nonprofits affiliated with the Catholic Church or that have worked closely with church officials on anti-abortion advocacy and other policy and legal matters received at least $10 million from Donors Trust, a donor-advised fund that in 2020 doled out more than $182 million in grants to organizations like the VDARE Foundation and New Century Foundation, which the Southern Poverty Law Center and the Anti-Defamation League consider to be white supremacist groups. 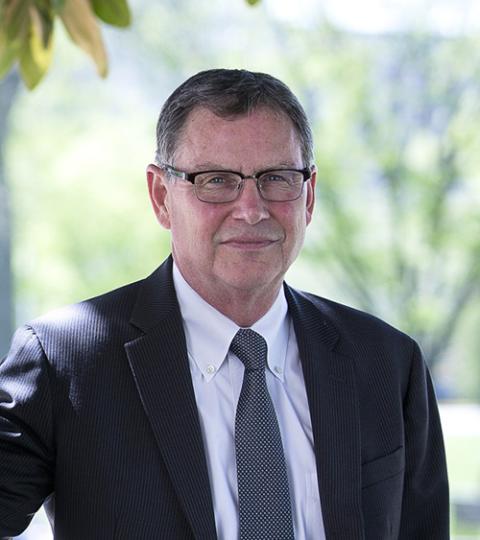 Other observers raised concerns about Catholic organizations receiving money from groups like the Donors Trust, which over the last 20 years has provided hundreds of millions of dollars to nonprofits that lobby against labor union protections, climate change mitigation policies, economic regulations, voting rights and immigration reform.

"People with economic interests have figured out that they can use the cultural antipathies that have grown out of the abortion debate to combat climate change [mitigation measures], COVID regulations, to do all these things that serve a libertarian agenda, which is inimical to Catholic social teaching," said Steven Millies, director of the Bernardin Center at Catholic Theological Union in Chicago.

But others say the fact that conservative Catholic-affiliated organizations received money from a group that supports far-right political movements and causes in some ways mirrors situations in which Catholic nonprofits have accepted funding from and worked with left-leaning groups and nongovernmental organizations to provide charitable and relief services.

"Part of living in a world where things are morally messy is that to do good, you have to cooperate with people and organizations that are doing some things that you disagree with," said Melissa Moschella, a philosophy professor at the Catholic University of America.

Meanwhile, one Catholic organization that received financial donations from Donors Trust in 2020 pushed back against suggestions that the money would politicize or unduly influence its operations.

"The donations in question are within a normal tithing range of some of our parishioners and would not stand out as unusual or influence our decision making," said Mitchell Palmquist, a spokesman for the Spokane Diocese. 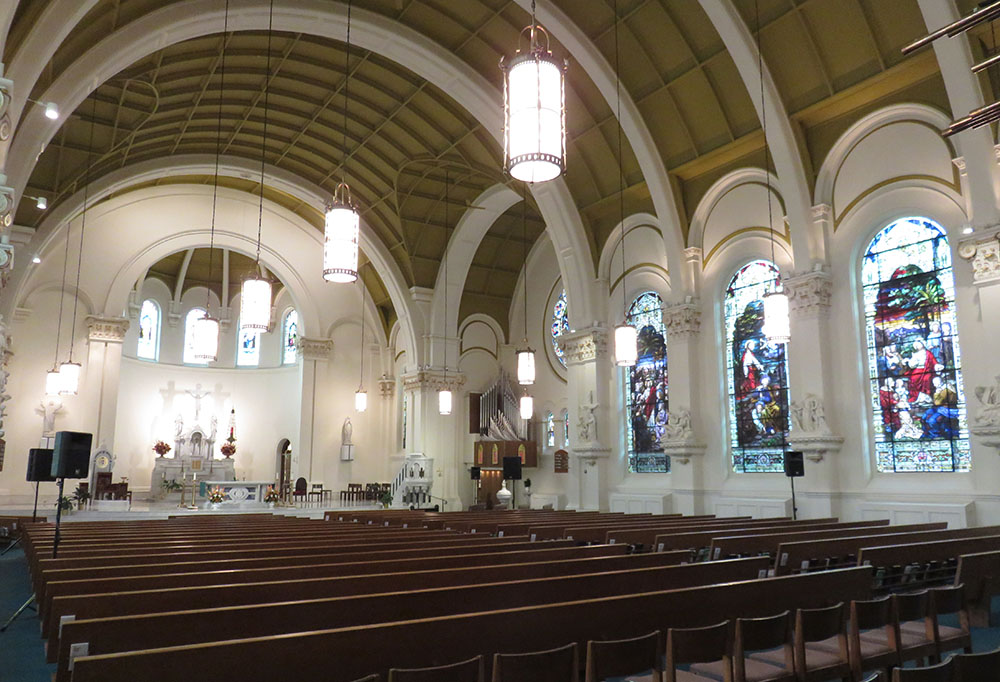 The interior of the Cathedral of Our Lady of Lourdes in Spokane, Washington (Wikimedia Commons/Antony-22)

The Spokane diocese — led by Bishop Thomas Daly, an outspoken conservative prelate — received $10,000 for its annual Catholic appeal and $500 to support a local Catholic school. The Cathedral of Our Lady of Lourdes in Spokane was given $15,000 for general operations.

Palmquist told NCR that donations are routed to the diocese through "a variety of means," including checks from financial institutions on behalf of donors.

The term "dark money" is often used to refer to political spending by nonprofit organizations that are not legally required to disclose their donors.

As a donor-advised fund, Donors Trust essentially is a clearinghouse — it receives funds from outside groups, and then uses those funds to make contributions to recognized charities. People who donate to donor-advised funds can recommend where their money goes, but the funds themselves have final say over how the money is allocated. The donors may get a larger tax write-off than they would giving to other charities or foundations. 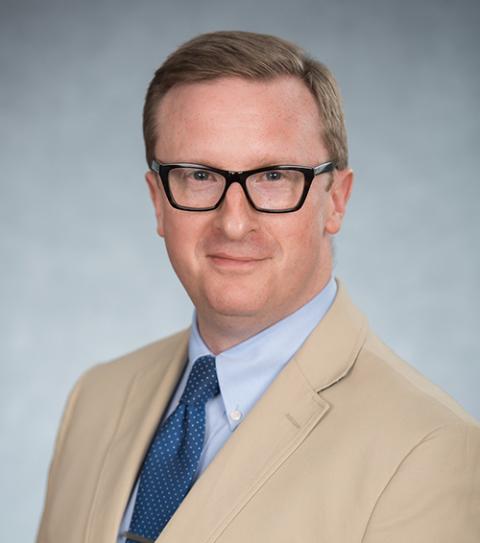 Individual contributors to Donors Trust are mostly anonymous, but tax documents indicate that charities and foundations bankrolled by major conservative benefactors like the Koch and Mercer families have given tens of millions of dollars to the organization in recent years.

Millies told NCR that the church's involvement in the nation's culture wars has made Catholics "very exploitable" for wealthy and powerful interests with political agendas.

"As the culture wars now have their own momentum and their own life, it's not hard to imagine that Catholics look like an interest group that can be deployed if someone's got enough money to do it," Millies said.

The Tea Party Patriots were one of the groups that helped organize the Jan. 6, 2021, rally preceding the attack on the U.S. Capitol. Turning Point USA helped transport busloads of Donald Trump supporters to the rally and participated in the "March to Save America" ahead of the event. 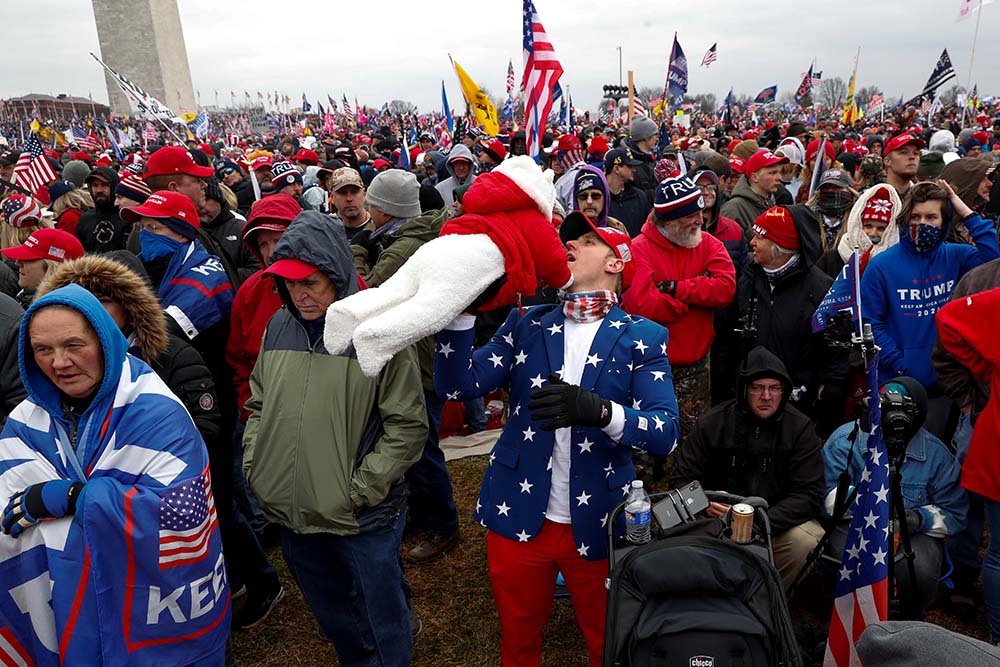 Supporters of President Donald Trump attend a rally in Washington Jan. 6, 2021, to contest the certification of the 2020 presidential election. (CNS/Reuters/Shannon Stapleton)

Donors Trust is the major donor-advised fund for the political right. On the left, organizations like the Tides Foundation dole out hundreds of millions of dollars every year to progressive groups in the United States and abroad. Left-of-center organizations that received $457 million in funding from the Tides Foundation in 2019 included nonprofits that advocate for abortion rights, LGBTQ equality, anti-racism initiatives, environmental protections and get-out-the-vote drives.

"This cuts across both left and right. There are dark-money organizations on the left as well," said Moschella, who mentioned Arabella Advisers, a nonprofit that serves as a hub for a network of progressive dark-money groups. "This happens on both sides." 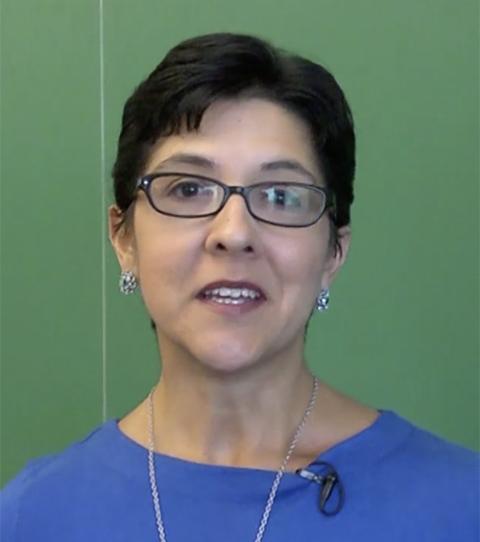 Moschella told NCR that she didn't see any ethical problems with Catholic organizations receiving money from nonprofits like Donors Trust if the money does not come "with strings attached." (Tax documents and other available public information do not indicate whether donations to charities are made with expectations for specific actions to be taken.)

"If accepting funding from this group would mean that they're only going to support you if you advocate for certain causes that are contrary to your mission or contrary to Catholic teaching, then obviously you would have to say, 'No, we can't take funding from you,' " Moschella said.

"But if it's just a matter that this group happens to support my position because I'm pro-life but they also support other things that I don't agree with, then fine, I can work with them because we share a common pro-life commitment even though I disagree with them on other things."

In 2020, Donors Trust directed $20 million to the 85 Fund, another dark money group formerly known as the Judicial Education Project that helps finance various conservative groups. The 85 Fund was founded by Leonard Leo, co-chairman of the Federalist Society who was critical in advising Trump to appoint conservative judges to the federal judiciary.

Founded in 1999 with the goal of "safeguarding the intent of libertarian and conservative donors," the Donors Trust also directed donations in 2020 to organizations that lobby for the decriminalization of sex work, as well as the legalization of recreational marijuana and physician-assisted suicide.

"It's clear that pure libertarianism cannot fit under a Catholic umbrella," said Schneck, who is also a former director of the Institute for Policy Research & Catholic Studies at the Catholic University of America.

"Everybody should realize that by taking this money, they're opening the door to the far right's efforts to further politicize our church," Schneck warned.

Millies argued that Catholic organizations and leaders should be wary of accepting money from organizations with stated partisan goals and hardline political ideologies that run counter to Catholic social teaching principles in some cases.

"Taking the money can seem like it's rather helpful in the sense that it supports Catholic organizations," Millies said. "But in the long run, it's actually quite destructive because the tendency of polarization is to drive people toward the extremes."

Despite those concerns, several nonprofits affiliated with or having close ties to the Catholic Church in the United States received substantial donations from Donors Trust in 2020. Among them: 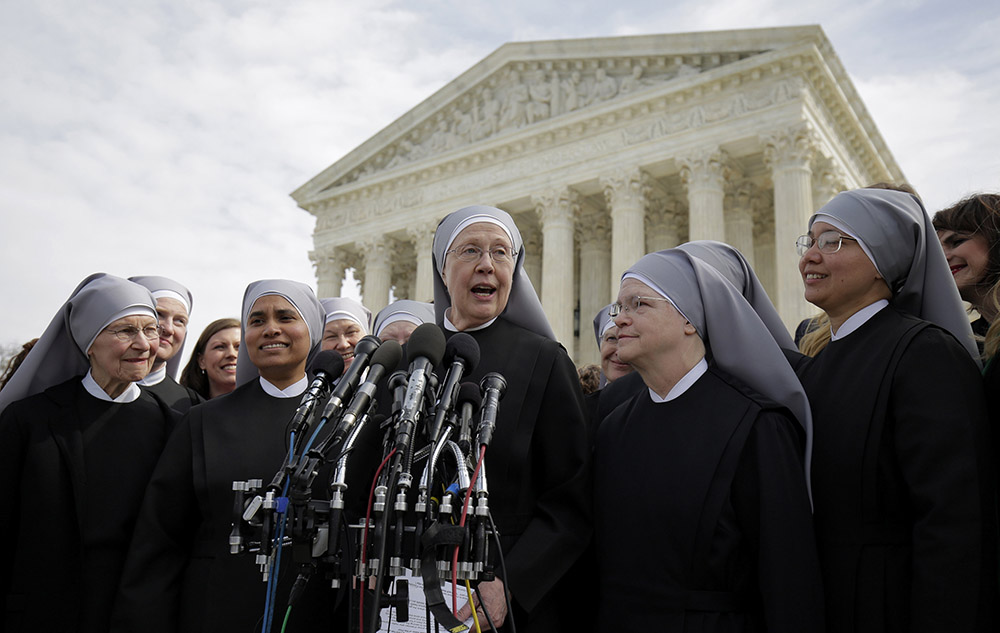 The Denver-based Little Sisters of the Poor speak to the media outside the U.S. Supreme Court in Washington, D.C., in 2016. The Becket Fund represented the sisters in their fight against the Affordable Care Act's contraceptive mandate. (CNS/Reuters/Joshua Roberts) 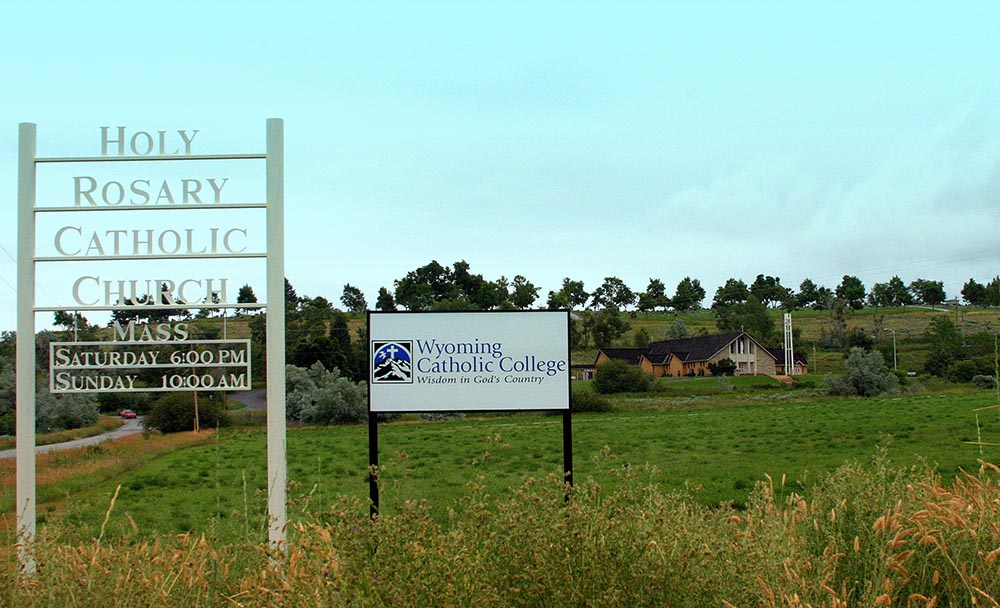 NCR contacted each of the organizations named in this article for comment about the donations they received, but only the Spokane Diocese responded.

Moschella said the criticisms that Catholic groups compromise their integrity, or risk damaging their reputation or independence by accepting money from groups like Donors Trust are unfair.

"If they can prove you took money and the money had strings attached and those strings actually compromised your ability to fulfill your mission with integrity, well then that's a fair criticism," she said. "But if the money doesn't come with strings attached that involve compromises on matters of principle, then it's not problematic."

Millies, of the Bernardin Center, argued that taking money from an organization like Donors Trust misrepresents the church and "positions it badly" in the public square while making it more difficult to fulfill the Great Commission's mandate to "make disciples of all nations."

"In the public mind, we have reduced Catholicity in the U.S. to a set of political positions or a side in the culture war," Millies said. "Taking money from an organization devoted to libertarian ideas continues and deepens, worsens that trend. In the long run, it's not a strategy for building the church."

A version of this story appeared in the Jan 21-Feb 3, 2022 print issue under the headline: The 'dark money ATM' for political right.