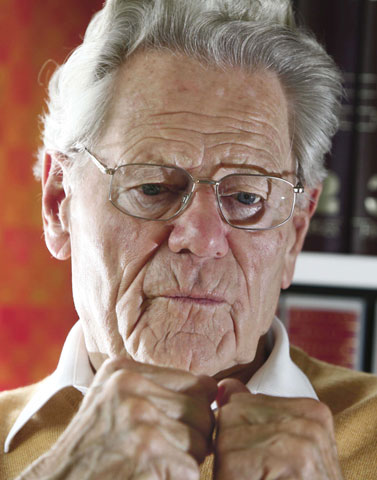 Note from Jamie Manson, NCR books editor: Swiss theologian Hans Küng has written more than 70 books that have influenced not only the ongoing quest to reform the Catholic church, but also theologians and practitioners who engage in ecumenical theology and interfaith dialogue. We asked noted scholar Leonard Swidler and veteran journalist John Wilkins to guide us in our appreciation of the vast scope of his corpus. Not only are Swidler and Wilkins experts in Küng's thought, both have read the third and final volume of Küng's memoir, which has yet to be translated from the original German. Both retrospectives also offer reflections on his latest title, Can We Save the Catholic Church?/We Can Save the Catholic Church! (William Collins, $16.99) On Thursday, we offered Swidler's reflection; here is Wilkins'. Both ran in the April 28-May 8, 2014, edition of NCR.

Hans Küng's house on a hilltop outside the German university town of Tübingen, where he has pursued his entire academic career, is full of books -- including, notably, copies of his own titles, amounting to more than 70, of which 50 have appeared in English translation. Often, they have been bestsellers. Applying impressive scholarship, yet in a style that is simple, direct and trenchant -- he has the ability of a great journalist -- he has ventured fearlessly into places that other theologians do not reach.

Seeing his quality, Pope Paul VI sought to enlist him. But Küng is Swiss, and embodies to a remarkable degree the independence of his nation. He refused. He would not be "a court theologian," as he put it.

He became famous very early -- too early, his critics allege. He was still only in his 20s when he dared to enter into ecumenical dialogue with the greatest Protestant theologian of the age, Karl Barth (also Swiss). Küng argued that if polemics were left aside, and the Roman Catholic and Protestant sources fairly evaluated, the key Reformation doctrine of justification of the sinner by faith alone need no longer divide Protestants and Catholics. Barth acknowledged that his thought was faithfully rendered in the manuscript Küng sent him. If Küng was equally faithful to the Roman Catholic side of the argument, Barth said he might well need to go to the site of the Counter Reformation Council of Trent and make a contrite apology to the bishops who had assembled there.

The Vatican was less impressed. When Küng published the final text in his book Justification: The Doctrine of Karl Barth and a Catholic Reflection (1957 -- publication dates throughout refer to the German originals), the doctrinal congregation opened a file on him. It was to become very fat.

Küng himself has likened the progress of his life's work to the ripples that spread out when a stone is thrown into a pool -- the stone in his case being a decision in favor of the scientific method of historical-critical analysis of Scripture. His endeavor has been to present for modern society a Jesus starting "from below" -- a man born of a woman in Palestine.

The Second Vatican Council (1962-65) has remained the touchstone of his thought. John XXIII is his model pope -- a true servant of the servants of God. The books Küng wrote at that time -- The Council, Reform, and Reunion (1960) and Structures of the Church (1962) -- proved to be prophetic.

In the 1970s, the next ripple spreading out from the stone widened Küng's scope from church structures to belief itself: How is the Christian faith to be commended to men and women in today's secularized society? Three groundbreaking books followed: On Being a Christian (1974), Does God Exist? (1978) and Eternal Life? (1982).

By the time the last of these volumes appeared, however, Küng was no longer an authorized Catholic theologian. In 1970, he had thrown down the gauntlet in his book Infallible?: An Inquiry. Papal infallibility, he contended, was the doctrine that made it so hard for the Catholic church to admit and correct its mistakes. Instead, he proposed that the church should claim "indefectibility" -- that despite all errors, it would always be maintained by the Spirit in the truth.

But this was to challenge a defined doctrine. Küng never ceased to believe that he was basically right. He returned to the charge in 1978, when he wrote an introduction to a book by a younger colleague titled How the Pope Became Infallible. He compounded the offense in 1979, when he released to the world's media a hard-hitting critical balance sheet assessing the first year of John Paul II's papacy. It is hard to judge which step was the more provocative.

The second volume of his memoirs (Disputed Truth, 2007) contains a riveting account of the crisis that followed. The German bishops questioned not only his rejection of infallibility, but also his doctrine of Christ as set out particularly in On Being a Christian. They did not believe that his "Christ from below" ever attained the "Christ from above" that is equally part of the Christian faith. They faulted his account of the Resurrection and felt he disregarded the tradition of the empty tomb. When his license to teach as a Catholic theologian was withdrawn in 1979, the memoirs leave no doubt that he came close to breakdown.

The University of Tübingen rescued him by withdrawing his ecumenical institute from the Catholic faculty and establishing it outside, with Küng as an independent professor of ecumenical theology. Now the ripples from the stone widened to embrace the great world religions that had long fascinated Küng on his multifarious travels. In 1985, his Christianity and the World Religions considered Islam, Hinduism and Buddhism; in 1989 came Christianity and Chinese Religions, written in concert with Julia Ching of Shanghai, professor in the University of Toronto. In 1991, he published Judaism: The Religious Situation of our Time, covering also the contemporary scene in the Middle East; and in 2004, another big book, Islam: Past, Present and Future.

The final ripple from the stone was still to come. Now the nations of the world at a time of shaken foundations were his focus. He was concerned that "a new model of capitalism" had slipped in, lacking any ethical moorings and motivated entirely by profit. Where could he find a corrective -- a global ethic that could be commended to all? He fastened on the Golden Rule: Do as you would be done by. In 1995, he set up the Global Ethic Foundation to spread his conviction that only such an ethic could measure up to the needs of a world where the economy, technology and communications were all on a global scale. He argued his case in Global Responsibility (1990) and A Global Ethic for Global Politics and Economics (1997).

He retired from his active professorship and became emeritus in 1996, but continued to work. In 2009, he published a personal testimony: What I Believe. The first step toward the option for God, he wrote, was to say yes to life, akin to a swimmer entering the water in confidence it would hold him up.

Shortly before Pope Benedict XVI abdicated in 2011, Küng set off another firecracker: Can the Catholic Church Be Saved? He cast himself in the role of a physician diagnosing a sick patient and prescribing remedies. The present crisis, he thinks, shows he was right all along in opposing the return of the centralized Roman system. He has expressed joy at Pope Francis' very different style -- and felt able to add a second, affirmative tier to the title of the English edition: We Can Save the Catholic Church!

The final volume of his memoirs appeared in October 2013 in German (not yet available in English), and caused shock. In it, Küng revealed he was suffering from incipient Parkinson's disease and macular degeneration, which leads to blindness. If he could not write by hand anymore, he asked, and could not read, what was left for him? He considered hastening his death. "Where is it written that in the last phase of their lives human beings lose the responsibility for their lives? You can't read anywhere in the Bible that human beings have to persevere right up to the very end of their lives. ... The right to life in no way means an obligation to continue living."

He then took it further: "As far as I am concerned, the unsatisfactory legal situation in Germany under which so many people suffer, forces me (and as a Swiss citizen with dual nationality I have the possibility) to join an assisted suicide organization in Switzerland."

Küng had always been greatly affected by the death of his younger brother from an inoperable brain tumor, not long after Küng was ordained. In 1995, he published a symposium on voluntary euthanasia, titled A Dignified Dying, with his colleague Walter Jens and with contributions from a medical doctor and a doctor of law.

Küng is confident that future generations will continue to be challenged and stimulated by his extraordinary achievements. He has always claimed that while the authorities may have the power, majority opinion is with him. History will decide, he has said, and "books survive many popes."

[John Wilkins edited the Catholic weekly The Tablet from 1982 until 2003.]

A version of this story appeared in the April 25-May 8, 2014 print issue under the headline: Ripples spread out from theologian's work.