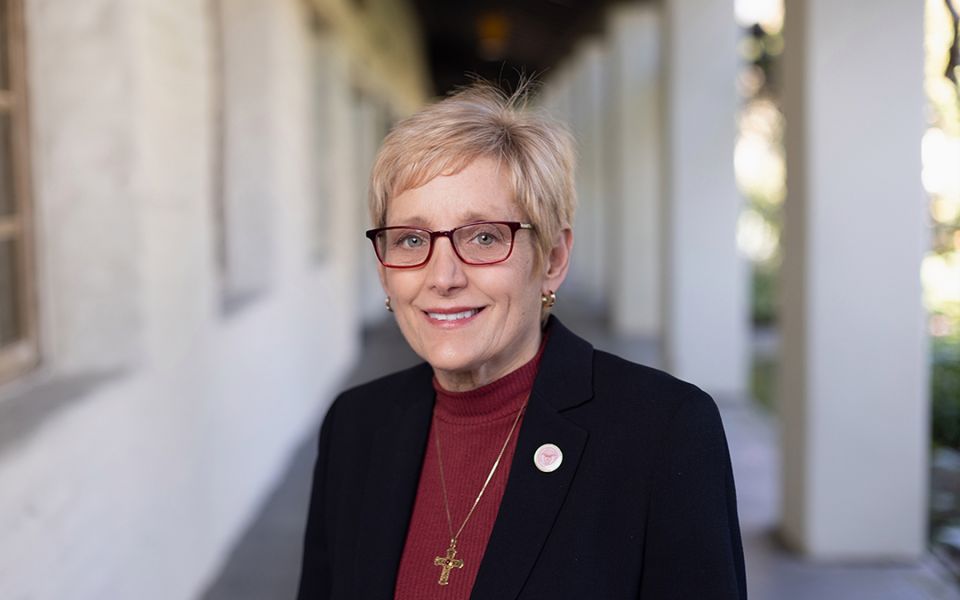 ST. PAUL, MINN. — Julie Sullivan, president of the University of St. Thomas in St. Paul, has been named president of Santa Clara University, a Jesuit-run university near San Francisco, where she will be the school's first layperson and first woman president.

"This is a historic moment for Santa Clara University," said Larry Sonsini, chair of the school's board of trustees, in a March 1 announcement.

He described Sullivan, who begins her new position July 1, as a "proven leader and faithful servant ideally suited to lead Santa Clara University in our pursuit of a more humane, a more just, and a more sustainable world."

Sonsini said Sullivan's extensive higher education leadership experience spanning more than three decades "brings strong academic and financial credentials to Santa Clara University," but he also stressed that she is a "person of demonstrated faith who has dedicated much of her career to service rooted in justice and care for the whole person."

In an email to the St. Thomas community, Sullivan, 65, said her decision to leave was a difficult one that she spent a long time discerning and praying about. She cited personal reasons that swayed the move including that her husband, Bob, is in California and she has adult children and four grandsons who live near Santa Clara.

"I yearn to be a more present grandmother to them, more than holidays and via FaceTime," she wrote. "Yet, I will miss you — my cherished colleagues and friends — very much. You are a strong community of passionate people who care very much about each other and our students."

She holds a bachelor's degree in accounting, a master's degree in taxation and a doctorate in business from the University of Florida.

Sullivan's biography on St. Thomas' website describes her as a "visionary academic leader (and) a champion for social innovation" who is a "passionate champion for the tenets of Catholic social teaching, including creating opportunity and economic inclusion through education, dismantling racism and building belonging, and promoting environmental sustainability."

St. Thomas' board of trustees appointed Rob Vischer, dean of its law school, to serve as interim president beginning June 1. The board plans to launch a national search for the university's next president.

Pat Ryan, chair of St. Thomas' board of trustees, said in a March 1 statement that Sullivan has been a beloved and inspirational leader who succeeded in elevating St. Thomas, building a team of strong leaders, and implementing several transformational priorities during her tenure."

The university, one of about 10 diocesan-run Catholic colleges and universities in the United States, is in its second year of executing a 2025 strategic plan that addresses growth as well as efforts to "foster belonging and dismantle racism."

On making the transition to Santa Clara University, located in Silicon Valley, Sullivan said it was the "unique combination of leading an outstanding Jesuit, Catholic institution" along with the strong pull of her family that made this an opportunity she couldn't pass up. She also said she was "confident that the momentum we have collectively built will seamlessly continue" at St. Thomas.

In a statement to the Santa Clara community, she said she is "looking forward to getting to know the Bronco family — students, faculty, staff, parents and alumni alike — and to engaging with full heart, mind and spirit in the work ahead."

The Broncos are the university's mascot.

In June 2021, the Santa Clara University board of trustees updated the university's bylaws to remove the requirement that its president must be a Jesuit priest.

In reaction to Sullivan's appointment, Jesuit Father Sean Carroll, leader of the Jesuits West province, said: "For centuries, our lay colleagues have played a critical role in our mission and our faith, carrying forward our commitment to be people for and with others. "

"As our world around us continues to change, we embrace and welcome Dr. Sullivan to this most critical leadership role and offer her and her family our prayers and support for their journey ahead," he added.

Cardinal George out of hospital, receiving antibiotics for infection