Church believes Catholics should be able to choose children's education, regardless of financial status 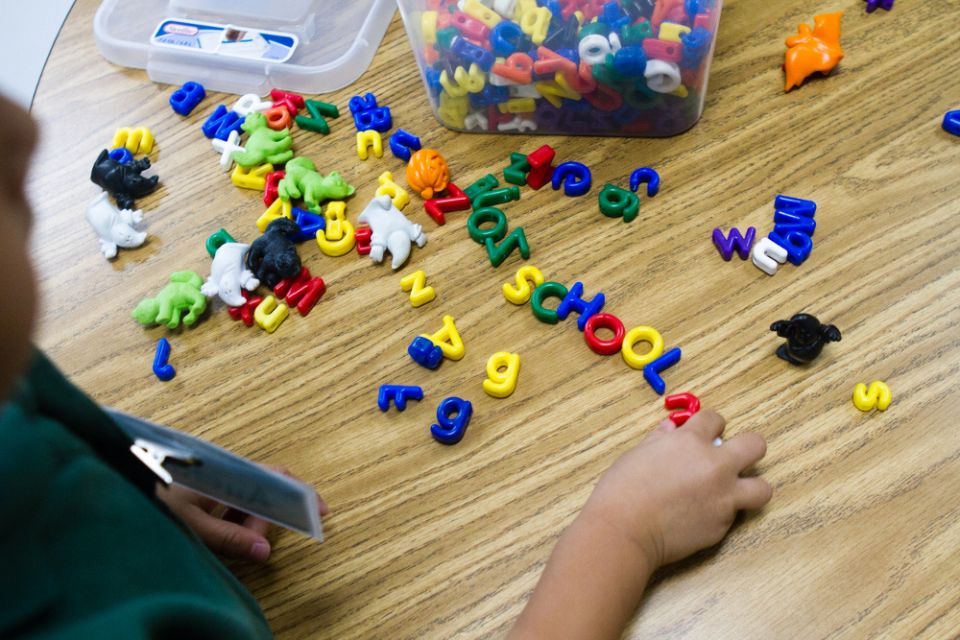 A kindergarten student spells out "school" with play letters on the first day of classes Aug. 8, 2017, at St. Helen Catholic School in Pearland, Texas. (CNS/James Ramos)

Many consider school vouchers a means of leveling the educational playing field for children, especially those from low- or middle-income families, or from communities with under-resourced or failing public schools.

The umbrella term for state and federal programs (such as vouchers) that provide financial incentives for parents who seek an alternative to their local public school is school choice or parental choice. For Catholics, especially, that term is inextricably linked to mission.

"From a Catholic school perspective, it's been embraced and welcomed primarily because of what I call mission fit: Catholic social teaching, the preferential option for the poor, making opportunities available for families who can't afford it, and making parents primary educators again," said John Elcesser, executive director of the Indiana Non-Public Education Association and a former superintendent of schools in the dioceses of Richmond and Wheeling-Charleston.

"What school is the best fit for that family's values and child's needs shouldn't be determined by zip code," Elcesser added, "but by the parent and what will be the best opportunity for success."

About 450,000 children across the country receive some sort of federal or state funding to attend the school of their choice. Studies show that 85 percent of voucher recipients attend schools that are religiously affiliated, with a plurality of those schools being Catholic. About 18 percent of Catholic school students do not identify as Catholic. 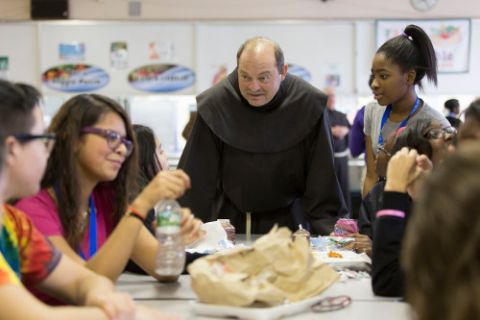 "Our mission is to serve the poor," said Presentation Sr. Dale McDonald, director of public policy at the National Catholic Educational Association (NCEA). "They sort out the doctrinal differences themselves."

Or, as the late Cardinal James Hickey said, "We educate those hungry for knowledge … not because they're Catholic, but because we're Catholic."

John Schoenig, senior director of teacher formation and education policy at the University of Notre Dame's Alliance for Catholic Education, is a supporter of parental choice as integral to Catholic practice.

"The fundamental belief of ours is that parents are the primary educators" of children, he said. "It's the birthright of every family, to choose the best education for their kids. The state should empower parents [to make that choice]. Should that be an education in the faith, then so be it."

There are currently 51 school choice programs in 26 states plus the District of Columbia, according to Schoenig, although that number also depends on how the programs are defined and who's doing the counting. Just how many students use a voucher or other means to attend Catholic schools is difficult to pin down because each state administers its programs differently.

A variety of factors account for this shift away from parochial education: Lay teachers cost more than members of religious congregations, leading to higher tuition — an average of $4,400 this year for elementary schools and $9,800 for high schools, not including uniforms, books, and other expenses, according to the NCEA; society is more secularized; the sex-abuse scandal has driven some Catholics from the pews; more educational options exist now than ever before.

This has led some to ask whether vouchers are being promoted by Catholics as a way to get students back into parish schools and keep dying parish schools on life support. The truth, say those who support school choice, is more complicated than that. At the heart of the matter are issues of doctrine, distributive justice and human dignity.

"School choice in and of itself is not the salvation of nonpublic schools or Catholic education."

In fact, a 2017 study of the Milwaukee Diocese published by the National Bureau of Economic Research showed that vouchers had a mixed effect, helping the schools financially but also leading to a drop in parishioners and donations to parishes, which ultimately impacted the schools.

"School choice is by no means an end all. It's kind of a piece of the puzzle," said Elcesser. "School choice in and of itself is not the salvation of nonpublic schools or Catholic education."

Dominican Sr. John Mary Fleming, executive director of the Secretariat of Catholic Education of the U.S. Conference of Catholic Bishops, agreed. "It's not about keeping schools open, it's about giving parents the choice to send their children to schools that meet their needs," she said. "It's not a backdoor way for the church to prop up Catholic schools."

It is, in fact, a matter of distributive justice, Fleming said.

"That's where the parental choice in education question is important, and the church has been supportive of financial support to parents to choose the schools they believe are the best for their children," she said. "And that is part of Catholic social teaching and has been for quite some time."

Thus the concern that Catholic dioceses view vouchers as a way to prop up the parish school system at a time when enrollments are falling and tuition is rising misses the larger point: The Catholic Church believes that parents should be able to choose where and how to educate their children, and money or a lack thereof should not stand in their way of doing so. 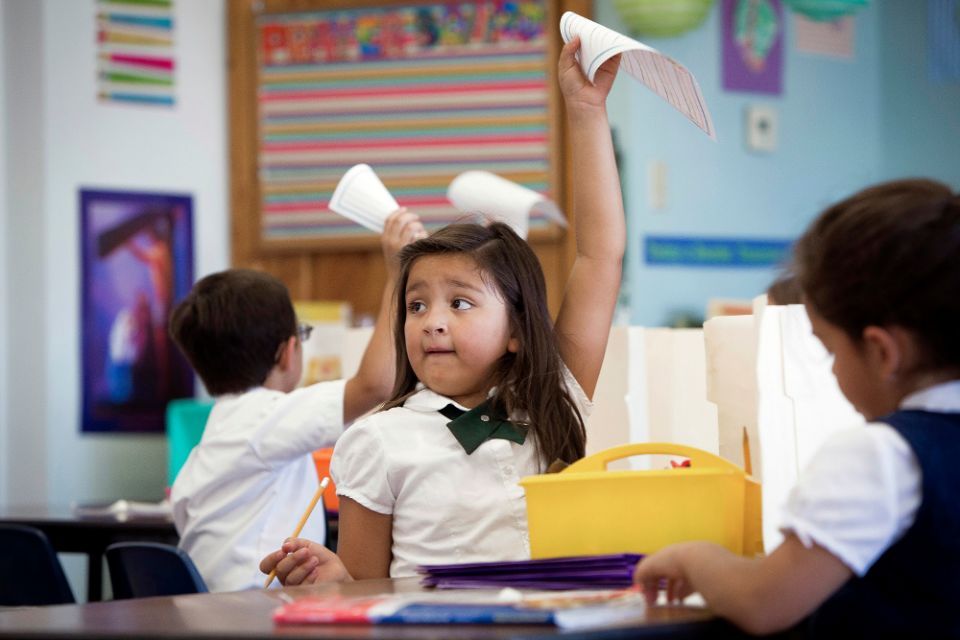 First-grade students finish an assignment at St. Ambrose Catholic School in Tucson, Arizonia, in this 2014 photo. Arizona will expanded its school choice program to all students by 2021. (CNS file photo/Nancy Wiechec)

Vouchers, scholarship tax credits, parental tax credits, and education savings accounts are the options available to parents today if they want to take their children out of public school, send them elsewhere, and get non-scholarship-based aid to do so.

In brief, vouchers (25 programs in 15 states plus D.C.) are public funds given to parents that follow the child to the school of their choice; scholarship tax credit programs (21 programs in 17 states) are private scholarship funds that come from individuals or corporations in exchange for a tax credit; parental tax credits (which are not common, and not counted by all researchers) provide a tax credit to parents for a portion of tuition paid; and education savings accounts include money the state would have spent on a child's public education but which the parent may now spend at the school of their choice.

"It's very important to educate people that this is not direct funding of our [Catholic] schools," said Jennifer Daniels, associate director for public policy for the Secretariat of Catholic Education at the U.S. Conference of Catholic Bishops. "The federal government is not writing checks to pay for the education of our children. The money is given to the parent, and the parent makes the choice, not the government."

Whether the state should or does pay for students to attend non-public schools is a central issue. Blaine Amendments in 38 states prohibit the funding of religious schools with public money. In 2002, the Supreme Court ruled in Zelman v. Simmons-Harris, that an Ohio program that gave parents state funds to send their children to private (in some cases, religious) schools was not in violation of the Establishment Clause of the First Amendment.

"Generally, the majority of gold standard studies that have been conducted on academic achievement for parental choice in education show positive growth."

The Catholic Church's role in this arena predates Zelman, going back at least to the early 19th century.

"That's when the church in the U.S. became very concerned that the large immigrant population was being forced into the common school setting," said Fleming, using the term for early public schools, "which was largely Protestant and not supportive of the catechetical efforts of the church in the United States."

The battle was joined. In 1925, a case before the Supreme Court (Pierce v. Society of Sisters) struck down an Oregon law requiring that all children attend public school. It was a partial win for the church, Fleming said, in that it led to the establishment of parish schools, but not to federal funding thereof. Thus the tuition model was born.

In 1929, Pope Pius XI issued the encyclical Divini Illius Magistri, which outlined the idea that the state and church should work together to allow parents to choose the most appropriate education for their children. "The State should respect the inherent rights of the Church and of the family concerning Christian education, and moreover have regard for distributive justice," it read.

Pope Paul VI's 1965 encyclical Gravissimum Educationis reiterated that parents should be "primary and principal educators" of their children, and further said the state "must see to it, in its concern for distributive justice, that public subsidies are paid out in such a way that parents are truly free to choose according to their conscience the schools they want for their children." 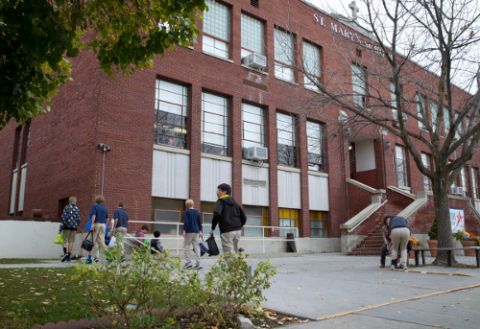 Brittany Vessely, the executive director of Catholic Education Partners, an advocacy group that works with the bishops and with state Catholic conferences to promote school choice, cited numerous studies conducted by Ed Choice, an educational reform group, that show the benefits to students of parental choice.

But other studies show different results. A 2017 report by the left-leaning Center for American Progress concluded that school choice is very much a mixed bag for communities, producing neutral results at best, and draining critical resources from both rural and urban schools at worst.

Asked whether there is a consensus of thought around the issue among Catholics, Fleming said, "I would say there's not a consensus because separation of church and state has been an extremely vibrant and contentious conversation in this country."

But Fleming looks at that wall between public and private through the lens of Catholic social teaching and sees education as "a common good that citizens pay back."

For Schoenig, it comes back to dignity, and the church's responsibility to recognize it in all people.

"Everybody in our country exercises some form of educational choice except the lowest income," he said. "The idea that we would tell somebody where to go to school based on their socioeconomic status is contrary to human dignity."

A version of this story appeared in the Feb 23-March 8, 2018 print issue under the headline: Church links justice, school choice .

People | School vouchers are not a bail-out for Catholic institutions, proponents say