'Slacktivism' makes the world a better place from the couch 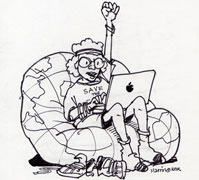 This morning I did a little work on the global fight against HIV/AIDS. Then I joined an environmental protest against genetically modified food and another one supporting undocumented workers. And, of course, a little feminist consciousness-raising.

Man, are my fingers tired.
You see, all this activism was accomplished while sitting on the sofa, computer in my lap, sipping my morning coffee. I merely opened my inbox and responded to various requests to sign online petitions or to like, share or re-tweet in favor of causes I support -- or against those I oppose.

Who knew changing the world could be so easy?

It's called "slacktivism" (a combination of the words "slacker" and "activism") by critics and refers to any feel-good effort, usually online, that requires minimal effort or investment, whether financial or personal.

Old-fashioned activists tend to look down their protest signs at slacktivists, seeing them as a bunch of, well, slackers.

To them, slacktivism is activism "lite" that doesn't contribute to meaningful change and, even worse, is more about the activist's self-esteem or online image.

And it's not just secular causes that are appealing to the desire to "care by clicking" -- especially among younger folks. A number of Catholic and other religious social justice organizations encourage slacktivism, too. Did you sign an online petition against the LCWR investigation? Or click to get a free "I support the nuns" bumper sticker? Or even "like" NCR's "Support Our Sisters" Facebook page?

Sure, "Support Our Sisters" has garnered more than 3,300 "likes," but high participation does not equal high commitment, argued Malcolm Gladwell in his 2010 New Yorker piece subtitled, "Why the revolution will not be tweeted." Unlike those who literally put their lives on the line in the 1960s, he said, today's online activists are not motivated enough for high-risk activism.

According to a 2010 study by researchers at Georgetown University's Center for Social Impact Communication and Ogilvy Public Relations, people who frequently engaged in "promotional social activity" (joining a cause group on Facebook, posting an icon on a social profile, blogging about a cause) were as likely as non-media social promoters to donate and twice as likely to volunteer their time and take part in events like charity walks.

"The presumption was that these individuals were replacing more 'meaningful' actions with simple clicks and shares," Denise Keyes, executive director of the Georgetown center, said in a press release announcing the study's findings. "But what we found is that they're actually supplementing -- not replacing -- actions like donating, volunteering and planning events."

So the Catholics who supported the sisters with a click were also more likely to support them in the streets or by getting out their checkbooks?

It's debatable. Other critics of slacktivism point to the psychological phenomenon of "social loafing," in which people are shown to put less effort into a task when other people are doing it with them. There's also the tendency for people to think they've done their part once they've done something, even if that "something" is only sharing a meme.

And some of the "causes" on sites such as change.org don't address systemic change, but rather seek to help an individual: "Stop Segundo's deportation!" or "Free the Disney dolphins!" Don't underestimate the power of an individual story on slacktivists: More than $680,000 was raised for the bullied grandmother/bus monitor in New York this summer. What most homeless shelters or other nonprofits wouldn't give for that donation!

Also criticized as not "real" activism are corporate activism, like buying a pink kitchen appliance to support breast cancer research; short-term boycotts, such as Earth Hour (in which people turn off their lights for one hour on March 31); and promoting a cause with identity markers like wristbands, car magnets or avatar adjustments.

The problem? Those actions are all about you: your pink toaster, your bumper, your image, your need to feel like you're doing something.

But let's be honest: Plenty of old-fashioned activists also are motivated by not-so-purely-selfless motives, and there have always been varying degrees of involvement in causes. When I was unmarried and child-free, I used to protest at the School of the Americas, even risking arrest. My sister, home with three children, baked me cookies for the trip. Now that I have two toddlers, I bake cookies, write checks and click "like."

It's true that amassing signatures does not necessarily result in real change, but it may depend on the cause. I joined thousands of death penalty opponents in petitioning the governor of Mississippi, but he still refused to commute the sentence of a young man on death row.

But how different is amassing numbers online than amassing them in a public place? If the purpose is to bring together like-minded folks, demonstrate power in numbers and get the attention of decision-makers and/or the media, "slacktivism" can make a difference. Awareness alone doesn't solve problems, but it's usually a good start.

And if people contribute/create their online identities by associating themselves with various causes, is that so bad? I would argue it's better to tell the world who you are based on your values rather than where you shop, or who your favorite band is.

[Heidi Schlumpf teaches communication at Aurora University in the Chicago suburbs and is the author of While We Wait: Spiritual and Practical Advice for Those Trying to Adopt.]

People | 'Slacktivism' makes the world a better place from the couch

Interrupting the darkness with laughter