A story of what it means to be a pastor 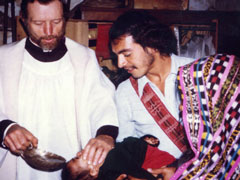 Fr. Stanley Rother is shown baptizing a child in this undated photo. In 2007, the Oklahoma City archdiocese formally launched the cause for canonization of the priest many believe was martyred for his faith. (CNS)

As the 2009-2010 “Year for Priests” concludes, it is worth asking a fundamental question: What does it mean to be a pastor? The life of Fr. Stanley Rother, an Oklahoma City archdiocesan priest (1935-81), provides a compelling answer to this question.

The Catechism of the Catholic Church states that the “the pastoral care of the parish is entrusted to a pastor as its own shepherd under the authority of the diocesan bishop.”

For the next several years, he served as an assistant pastor in four parishes. Then in 1968, Rother traveled to Oklahoma’s mission in Santiago Atitlán, Guatemala, situated next to Lake Atitlán. His life was changed forever.

Within five years, Rother learned to preach in the Tzutuhil dialect. His daily life was fully integrated into the life of his people. His rectory was open to the people and their problems and offered little privacy.

Despite early troubles with Latin, Rother went on to translate the New Testament into the Tzutuhil dialect, known to be one of the most difficult languages to learn.

Rother and the Tzutuhil people lived in a broader context of political turmoil and violence during the 1970s. Death squads lurked in the night. Townspeople were picked off, later found dead along the roadside. Some disappeared forever.

In 1981 the death squads came looking for Rother.

A fellow American missionary and New Ulm, Minn., priest, Fr. Greg Schaffer, was serving nearby at the San Lucas Toliman Mission. He warned Rother, “They’re on the streets to get you.”

Rother was not alone. All priests and catechists were under this constant threat.

Rother left Guatemala to attend the ordination of his cousin, Fr. Don Wolf. He then returned to Mount St. Mary’s Seminary where he hoped to spend a week in prayer and contemplation.

Picking Rother up at the airport was a friend from seminary days, Harry Flynn, today archbishop emeritus of St. Paul-Minneapolis. Then-Fr. Flynn was the seminary rector. He remembers clearly Rother’s visit: “Immediately upon entering the car, Rother began pouring his heart out about the challenges he was facing in Guatemala. Stanley longed to come back to the place where he was formed as a priest, Mount St. Mary’s.”

Rother’s conundrum was clear. He told Flynn, “If I speak out, they will kill me. If I remain silent, what kind of pastor would I be?”

Flynn said he saw Rother in the chapel and at a mountain grotto where St. Elizabeth Ann Seton would pray and where another Mount St. Mary’s graduate, Maryknoll Bishop James Walsh, would pray as a young college student. “While imprisoned in China, Walsh longed to return to the seminary grotto from imprisonment in China,” Flynn said.

At the end of the week and prepared to leave the seminary retreat, Rother told Flynn, “I know what I must do.”

Rother’s archbishop knew that it was dangerous for Rother to return to Guatemala and suggested, but did not order, that Rother return to Oklahoma City.

Flynn drove his good friend Rother to the airport knowing that they would not see each other again. Rother knowingly sealed his own fate. He was going back to pastor his people.

In a Christmas 1980 letter to the people of the Oklahoma City archdiocese and the Tulsa, Okla., diocese, Rother wrote: “A nice compliment was given to me recently when a supposed leader of the church and town was complaining that ‘Father is defending the people.’ He wants me deported. This is one of the reasons I have for staying in the face of physical harm. The shepherd cannot run at the first sign of danger. Pray for us that we might be a sign of the love of Christ for our people, that our presence among them will fortify them to endure these sufferings in preparation for the kingdom.”

“Stanley told me that he would not be taken away and killed in the shadows,” said Flynn. “Stanley was a strong man and intended to fight his assassins.”

In the early hours of July 28, 1981, Rother was attacked in the rectory by three men in ski masks, shot and killed. Rother’s knuckles were rubbed raw by the fight.

After a funeral Mass and at least two other Masses, Rother’s body was flown home to a family plot in Okarche, Okla.

According to Flynn, Rother’s heart was inexplicably incorrupt many years after his death. Today, Rother’s rectory room is now a parish chapel where you can still see his blood splattered over the walls.

On Oct. 5, 2007, Archbishop Eusebius Beltran announced the opening of the cause for canonization for Rother, the first for a person from Oklahoma to be considered for sainthood. Flynn was recently interviewed by representatives of the canonization commission.

For more information on the cause for beatification, see www.catharchdioceseokc.org/history/rotherindex.htm.

For information about the San Lucas Mission, see www.sanlucasmission.org.

People | A story of what it means to be a pastor