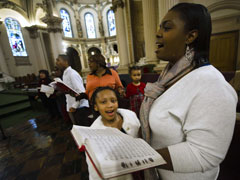 Charlene Ward and her daughter Arym sing in the choir during Sunday Mass at St. Leo Catholic Church in Detroit Dec. 18. (CNS/Reuters/Mark Blinch)

On some educational and socioeconomic scales they exceed or rank equal in achievement with white Protestants, although they still rank below white Catholics.

But in terms of religious engagement and devotion, the African-American Catholics surveyed easily outpaced white Catholics, and the generation gap experienced among white Catholics in those areas -- with younger white Catholics considerably less engaged with the church than their elders -- has not affected younger black Catholics, according to the study.

The country’s younger adult African-American Catholics are more likely than their white counterparts to participate in weekly Mass and be engaged in their parish, the study said.

The full report on the National Black Catholic Survey, conducted last summer, was released to NCR in late December.

University of Notre Dame researchers Darren W. Davis and Donald B. Pope-Davis conducted the study, which was cosponsored by the National Black Catholic Congress and the Indiana university’s Office of the President and its Institute for Church Life.

The study is the first ever to focus specifically on African-American Catholics in numbers sufficient to draw statistically reliable national information on their views, attitudes, religious engagement and demographic characteristics, the researchers said.

Among the study’s findings were:


“Large racial differences in marital status are evident in the data,” the report said. “The percentage of African-American Catholics who are married, 39.9 percent, is significantly lower than white Catholics, 53.9 percent.”

The study said that the closer parallel of U.S. black Catholic and black Protestant marriage rates -- 39.9 percent and 35.2 percent respectively -- suggests that within the U.S. black community “cultural norms may be more of a factor” than religious affiliation in determining approaches to marriage.

On levels of religious engagement -- which the study sought to determine in three distinct areas, spiritual, emotional and social -- it found that African-American Catholics are less engaged than their African-American Protestant counterparts on all those levels, but they are more engaged than their white counterparts, whether Catholic or Protestant.

The level of black-white differences among Christians indicated that whether Catholic or Protestant, “African-Americans are more religiously engaged” and that the differences can be located in different black and white “cultural norms” rather than religious norms, the study said.

Similarly, there were major differences between black and white Catholics on their likelihood of going to a priest for help in dealing with major life or family issues.

On all the issues presented in the survey -- death in the family, marital problems, alcohol problems, sickness, religious education, family problems -- black Protestants were the most likely to say they would seek help from their pastor or minister. Black Catholics were next in most categories and were either ahead of or nearly identical with their white Protestant counterparts.

White Catholics were the least likely to say they would consult a priest on those issues, lagging behind black Catholics by about 20 percentage points.

When asked how important religion was in their life, the vast majority of black Catholics and black Protestants in all adult age groups -- mostly in the 80 percent range -- ranked it strong or very strong. Among white Protestants, about two-thirds to three-fourths ranked it that high.

Less than a fourth of U.S. black Catholics said they thought their church is racist against African-American Catholics, but at the same time less than half -- ranging from 37 percent to 45 percent -- said they were satisfied or very satisfied with the way the church promoted black bishops, emphasized black saints, targeted black vocations, promoted racial integration, supported issues like affirmative action or called attention to problems in Africa.

When asked about perceived racism within their own parish or congregation, nearly a third of black Catholics said they felt uncomfortable at least sometimes because they were the only blacks there. About one-fourth felt they were at least sometimes avoided because of their race, or others were reluctant to shake their hands, or their pastor was insensitive to issues important to their racial group. By contrast, only about one in seven black Protestants perceived such problems in their congregation in any of those four areas.

As a general rule of thumb, sociologists say that any scientific random sampling of 1,000 people in a particular social category will probably bring results representative of that entire population within plus or minus 3 percentage points.

Mother's principles were tested and found true after daughter's murder